This Atlas might not be 100 tons and 17 meters tall, but it IS a military powerhouse nonetheless. Unveiled by the Defense Advanced Research Projects Agency (DARPA) Thursday, July 11th at Boston Dynamics in Waltham, Mass, the Atlas is a prototype humanoid robot for performing operations in environments too dangerous for human beings. At 6’2″ and between 290 and 330lbs, the robot simulates the approximate height and weight of a fully outfitted infantry soldier. 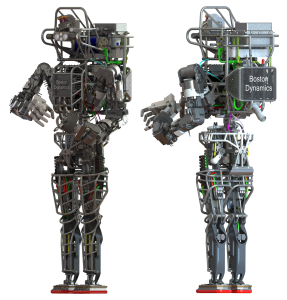 The face could use Alex Kerensky’s touch

The purpose of Atlas is to assist in emergency situations in hazardous environments. This would seem to conflict with DARPA’s sister project THOR (Tactical Hazardous Operations Robot). DARPA did not mention combat per se, but the ‘birdcage’-like reinforcement bars on the torso, arms and legs would be excellent anchoring points for impact or ballistic armor as well as acting as a shaped-charge defeating standoff type ‘slat‘ armor as seen in modern combat vehicles like the Stryker. (I’ve always imagined this type of structuring is how individual armor plates are mounted to BattleMechs)

With two fully functional hands; one developed by Sandia National Labs, the other by IRobot, the Atlas may have a telepresence mode whereby it can be operated by a virtual-reality interface. IE: It may be tactile enough to allow bomb disposal experts to deactivate bombs with the articulation of their own hands instead relying on the claw, shotgun, or projected water disruptor used by the current series of specialist robots for bomb disposal teams. In addition to moving debris, carrying objects or people, and other things a dedicated bomb-disposal robot cannot do. Obviously this is just speculation at the moment. (But keep in mind the SWORDS combat robot began as a Talon bomb disposal robot first weaponized in the field) 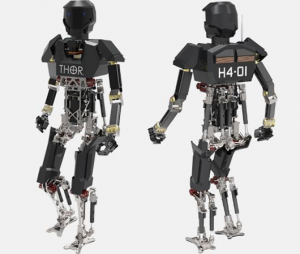 T.H.O.R. Hazardous operations robot that cooks like a de-militarized COM-2D

The Atlas was developed as part of the Virtual Robotics Challenge (VRC). Seven teams put the Atlas and other designs through a variety of virtual torture tests designed to find and chart its performance and to help shakedown any flaws in the designs. Some of the other VRC robot projects can be seen in this video. You also can get a sense of some of the missions the robots are being developed for in the video; which included anything from manipulating a water valve to moving debris; even driving a vehicle. Kind of gives “Robot Operating System” a whole new meaning doesn’t it?

Atlas uses a LIDAR and stereo optics as navigation sensors. So it can probably also be able to navigate and perform some minor tasks on its own.

Corporate and Government entities like NASA’s Jet Propulsion Laboratory, Johnson Space Center, Virginia Tech, Drexel, Carnegie Mellon and SCHAFT Inc are all competing in the development of hardware, and more importantly software, which will help generate the data necessary for robots of similar mass and size to a human to approach human agility. In the video you can see the testbed balance on one foot while being knocked off balance, recover without falling after tripping over obstacles, navigate stairs and drops and climb.

There are probably no plans of actually weaponizing any of these new robots in the near future. But if it can take a warfighter out of the line of fire and away from danger, sooner or later it will probably be attempted on a humanoid chassis just like the current wheeled tele-operated scout platforms like SWORDS.

As long as they don’t start talking like Arnold Schwarzenegger, I think can breathe easy.