I’ll be honest, I didn’t exactly ‘get’ the whole dating simulator craze. Even when the game speaks directly to me I’d rather be spending my gaming hours in a giant robot dealing death and destruction (or a ninja, or pirate, or something similar). But dating sims? Whatever, man. That stuff is for chicks.

Then I saw the trailer for A Locust Love Story and my life will never be the same.

Born from the creative genius of MechWarriors Krivvan and Halimede, A Locust Love Story follows young Locust-chan as she attends her first day at River City High. As a transfer student just going into her second year of high school Locust is entering the prime of her combat shelf-life, but she’ll have to be careful. There are mean ‘Mechs at this school, just waiting to eat a tasty little morsel like her for breakfast!

She won’t be alone though – Locust will meet lifelong friends who will help her draw strength to overcome the many challenges that lay ahead, as well as have loads of fun along the way. 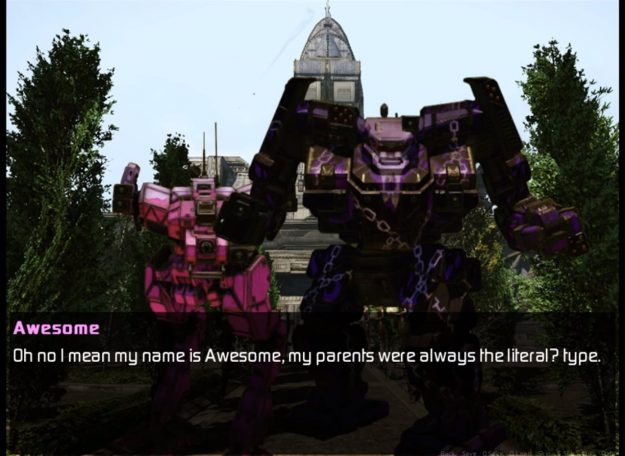 She sure is Awesome

“The story line was to be based partially on the somewhat rocky patch and meta shift history of MWO,” Krivvan clarifies, “which I figure was probably because we were both playing in some tournaments and the first MechWarrior Online World Championship at the time.”

The entire game is built on a visual novel game engine called Ren’Py. The engine is built on the Python programming language and is relatively simple to use. It’s also the foundation for a metric ton of visual novel games, the quality of which will range from something like Locust Love Story to somewhat less reputable titles. 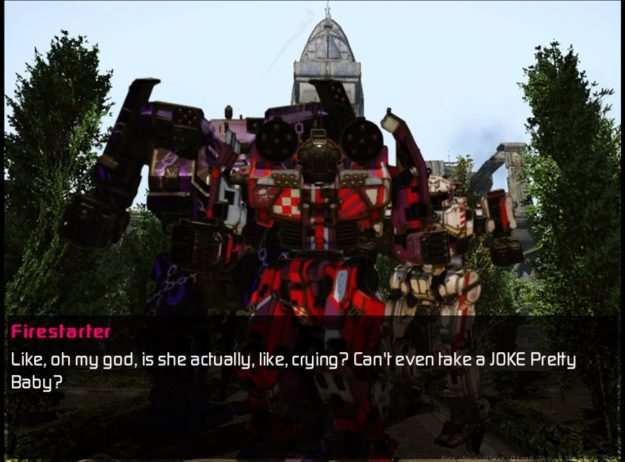 High school can be a mean place

As for the workload, it’s a fifty/fifty split between the pair. Krivvan does most of the programming, while Halimede takes care of the visual elements. “Most of the art (besides the title screen, I would like to take credit for that) was Halimede’s thing, and she designed the characters,” says Krivvan.

“For the actual art I made up some camos to fit the Personalities – ‘Pretty Baby’ for example got the darker shades and Purple for being a bit depressing and lonely,” tells Halimede. “Then we just took pictures of ‘em in different poses, some free flight spectator shots of River City for backdrops, and an extensive photo shoot with our heroine Locust-chan for the cover.”

The intro was as simple as adding “some effects like the flower petals”, and then taking some existing sound effects and buttons from MechWarrior Online.

As for why a Locust, Krivvan isn’t quite sure. “Maybe because there was something distinctively cute and petite about Locusts?” 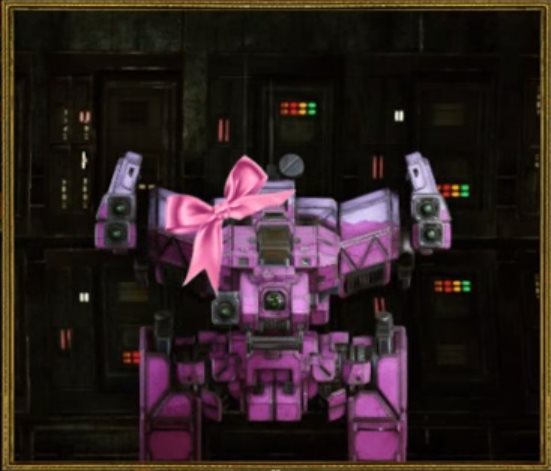 So far the game is just a trailer with what the pair have been able to finish so far, but the skeleton of a truly amazing dating sim game is there. “We originally started when both of us were still active in the MWO competitive scene and it dropped by the wayside a bit when the World Championship rolled around,” says Halimede. “In general I would love to finish it someday.”

“And there are a few surprises planned that I haven’t mentioned yet,” adds Krivvan.

I for one am on the edge of my seat wondering what will happen to Locust-chan next. Here’s hoping that Krivvan and Halimede find the time to bring this amazing ‘Mech dating sim to life.

2 thoughts on “A Locust Love Story”