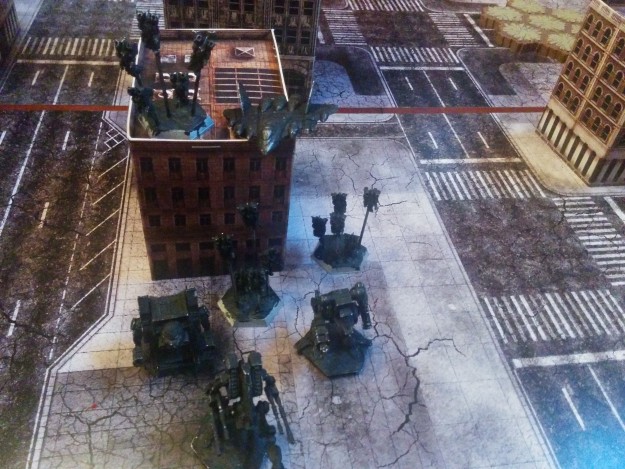 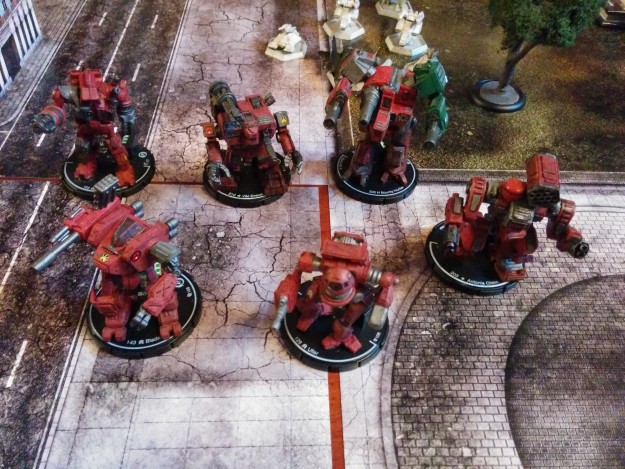 Slightly photo-bombed by Jade Falcon tanks, the Draconis Combine player was a new addition to the Leader Board group and asked if he could use his figures from MechWarrior AoD. Fortunately, Alpha Strike can accommodate this with some slight attention to some of the rules, and we were glad to have him along for the day. The Marauder was Skill:1. The Thor II was Skill: 2. The Shockwave and Centurion were both Skill: 3, and the Blade and the Uller were both Skill: 4.

Edit: I originally had wrong information for the Draconis Combine list. It has been fixed. 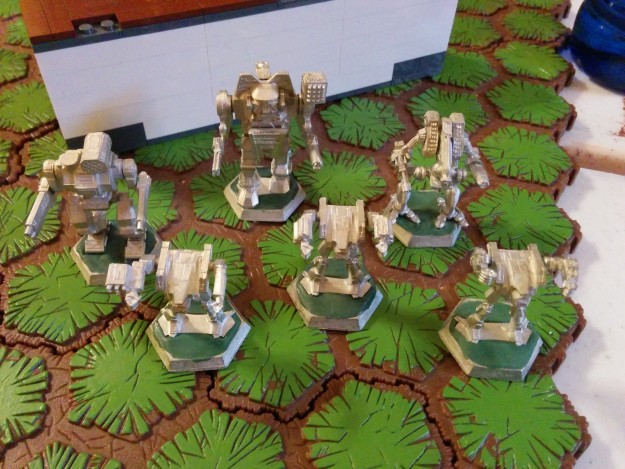 Clan Ghost Bear once more showed up with a suspicious lack of Battle Armor, despite all the OmniMechs. All units were at Skill: 3. The hammer and anvil approach is almost over done in this list. 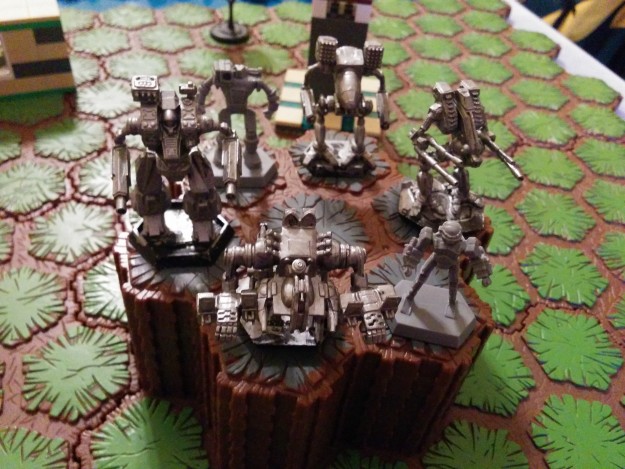 Wolf’s Dragoons showed up with a characteristically mixed force of BattleMechs, in both IS and Clan tech. Units were mixed Skill: 3 and Skill: 2. 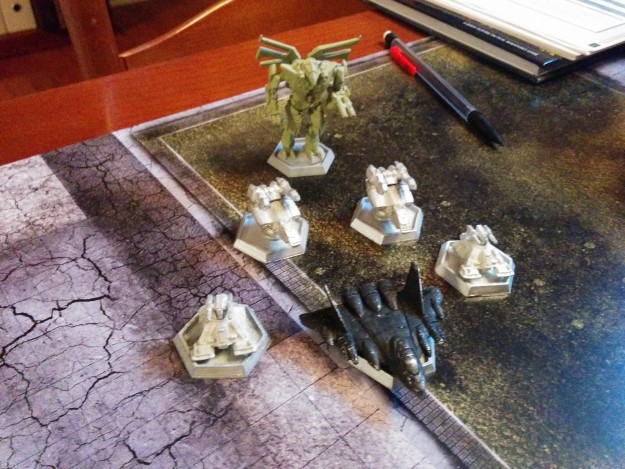 The Jade Falcons came into Week 3 with one of the most unique lists we’ve seen yet. Using only a single BattleMech, the tanks and aerospace assets were a surprising handful for all opponents. All units were at Skill: 3. 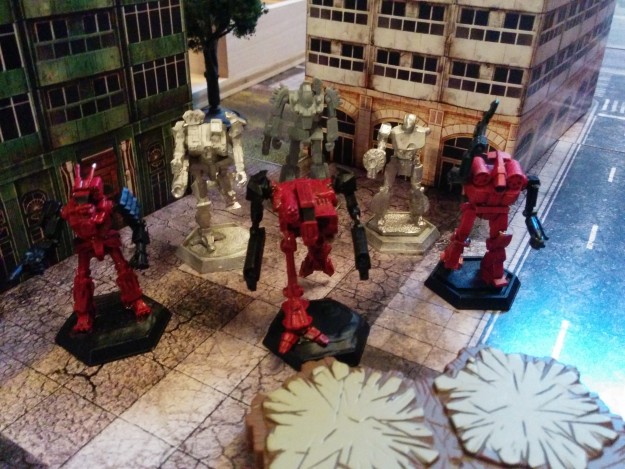 Riley’s Raiders were sporting some fancy tech this week. The Battlemaster was a special variant with two C3 Master computers in it, and the Thunderbolt had another Master. The rest of the unit all had C3 Slaves. All units were at Skill: 4. 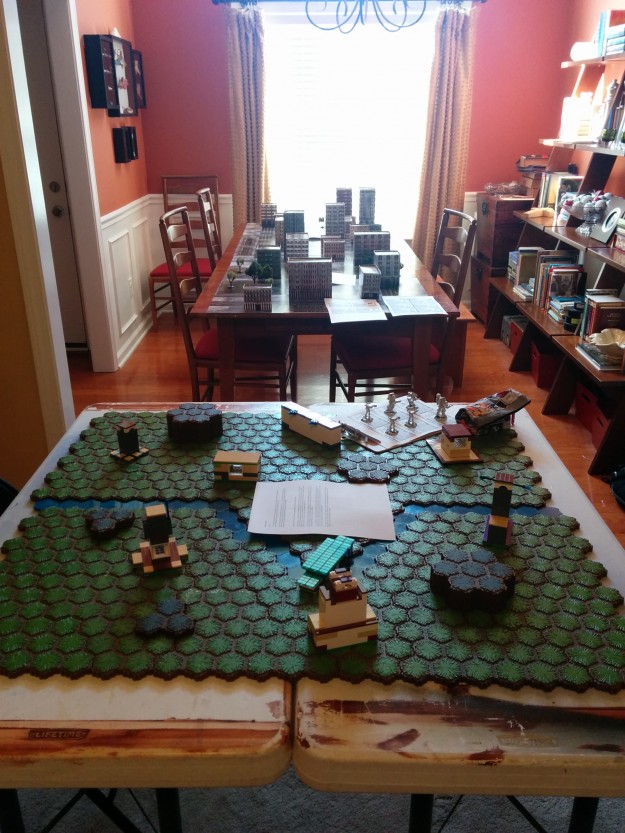 We ran three tables for Week 3.

Disclaimer on Pictures – Yeah, for some reason I mostly only got pics of my games. Sorry for not having a visual for every game.

Week 3’s scenario was a modified version of King of Hill.

These two enemies faced off again in Week 3, and the fighting was fierce. The Jade Falcon Shrike served its purpose and attracted the majority of the Wolf’s Dragoons’ aggression. This ruse worked out well for Clan Jade Falcon, who was able to secure a quick Objective Victory in a few short turns. The harassment of the tanks combined with the Shrike‘s stubborn refusal to die easily, though eventually it did, combined to frustrate Wolf’s Dragoons just enough for Clan Jade Falcon to grab the win. 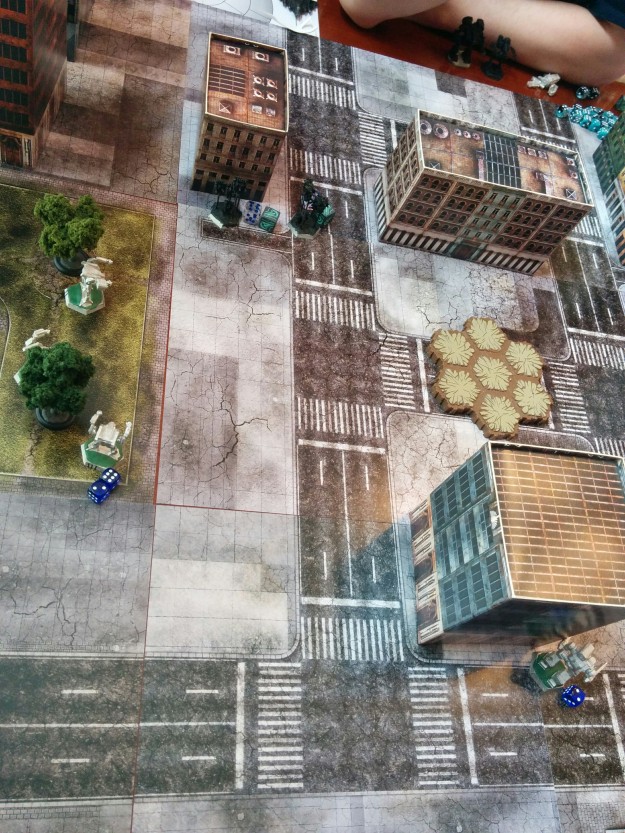 One of the most tactical games all day, Clans Ghost Bear and Snow Raven fought bitterly over the objective for the whole 90 minutes of Round 1. The losses on both sides were fairly even, with neither side gaining an advantage. On the final turn, just as the 90 min timer ran out, Clan Ghost Bear managed to remove the last Snow Raven unit from the objective and gained a single Objective Point. It was a win, but either side could have claimed victory with slightly different dice rolls. 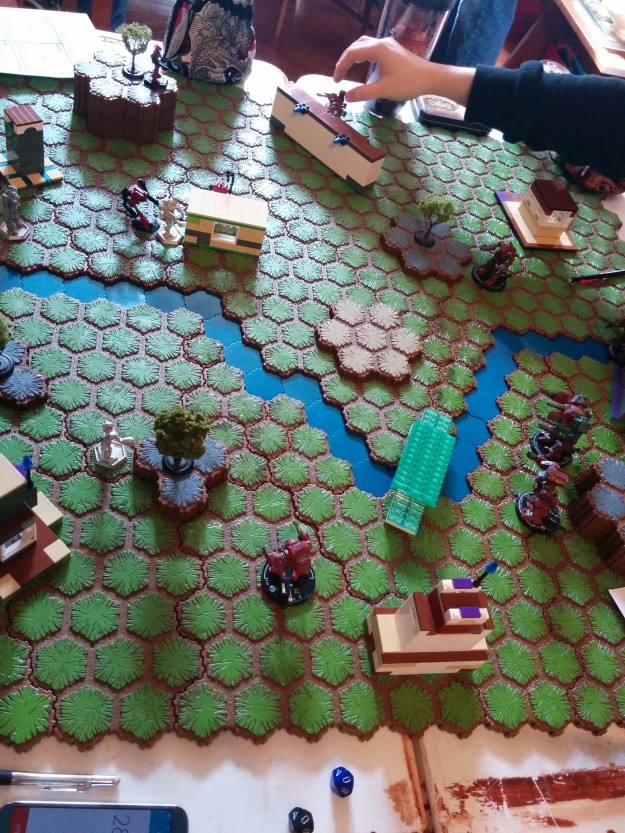 A bitter contest, the two forces clashed and bashed into each other, but Riley’s Raiders were still getting used to their new C3 equipment. Despite putting up a valiant fight, the mercenaries were eventually turned back and shoved off the objective, enabling the Draconis Combine to secure a win as the round timer ran out. Only two of the Draconis Combine `Mechs fell during the conflict, while a single mercenary made it out to tell the tale.

In one of the bloodiest matches of the day, Clan Ghost Bear and Wolf’s Dragoons tore into one another with complete abandon. The scenario appeared to be non-existent as the two sides went one-for-one in the early turns for kills. By the end, only two `Mechs on each side remained. The final turn was especially exciting, as the Dragoons Black Hawk found itself against two remaining Ghost Bear Fire Moths. The Black Hawk annihilated one of the remaining Fire Moths, but it was overcome by massed fire and succumbed to death by a thousand little lasers, leaving one Clan Ghost Bear Fire Moth as the lone survivor of a bloody and metal mangled battlefield. 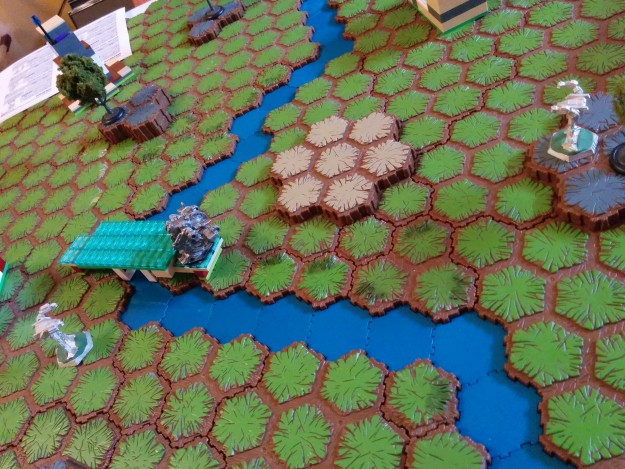 The battle between Wolf’s Dragoons and Clan Ghost Bear comes down to just a few units.

Unlike the Ghost Bear and Dragoons game, this game was all about the scenario, to the point that the final dice roll decided who got an Objective Victory. The Jade Falcon forces’ mobility helped keep alive against a deadly and accurate C3 network that the Clan forces did not have the ability to disrupt in any way. Eventually, Riley’s Raiders won out control of the objective, and Clan Jade Falcon failed a bombing run to take out the Battlemaster, enabling the mercenaries to get full points for an Objective Victory. 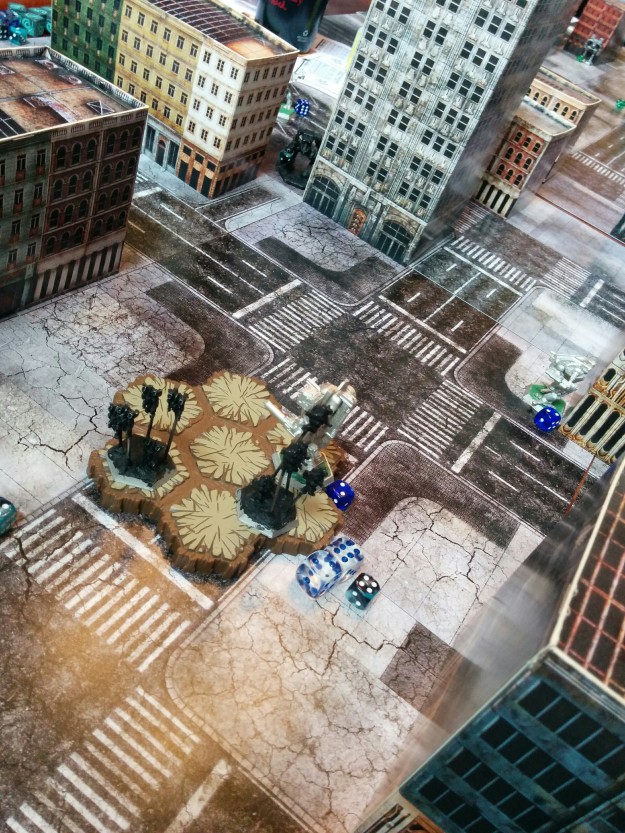 Clan Snow Raven made excellent tactical use of its Sylph Battle Armor throughout the day.

I have to admit that I know the least about what happened in this game. I do know that the Snow Raven player had a tremendously horrible run of dice rolls that allowed the Draconis Combine to gain an early lead as far as kills and control of the board. However, Clan Snow Raven fought back against really bad odds and managed to scrape a win out of it. The Draconis Combine player was really shocked at how quickly the game turned around on him, and Clan Snow Raven picked up its first win of the season.

Leaving Week 3 behind, the standings are starting to show signs of some trends. Scenario Victories are difficult to come by, and only one player stands undefeated.

Also, nobody has yet submitted painted units for the season. I hope this column starts showing some signs of competition soon.

Week 4 of the 2016 Leader Board Season will be fought on Thursday, February 18.