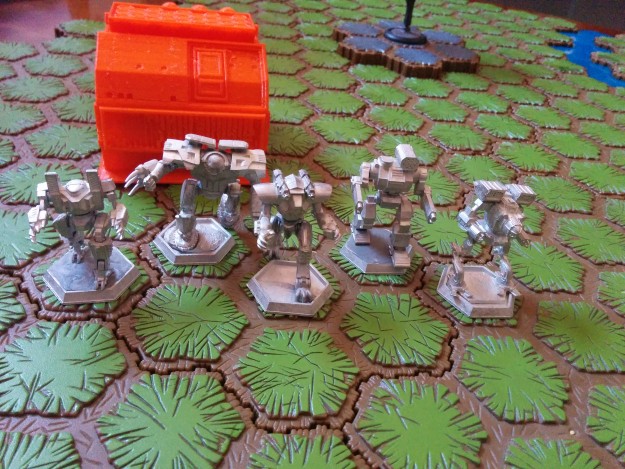 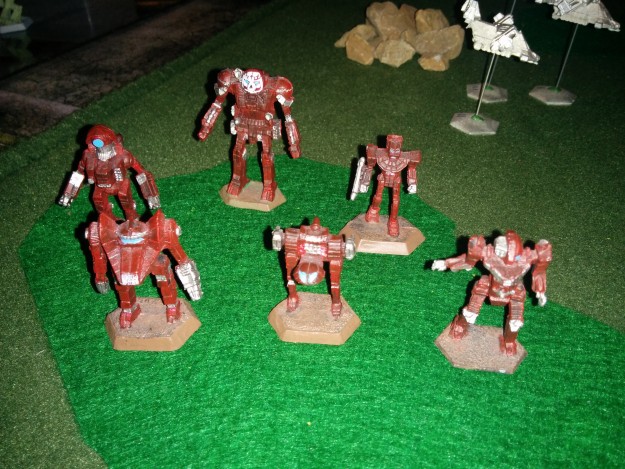 The 5th Sword of Light prepares to make its mark on the league.

One of the new-to-the-game players from Week 2 was back in the fray, and played a force from the 5th Sword of Light. The force consisted of an Atlas, Grand Dragon, Cyclops, Panther, Jenner, and a Grasshopper. I believe all units were at Skill: 3. 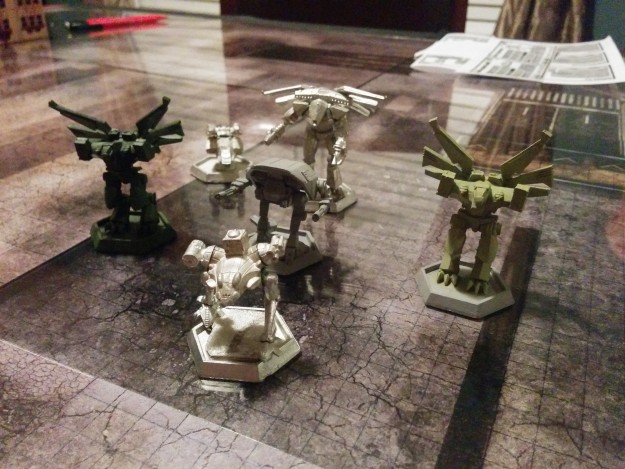 The Jade Falcon force featured a strong BattleMech presence with just a dash of Cizin cruising around the battlefield. The `Mech part of the force contained two Gyrfalcons, one Adder, one Fire Falcon, and a Jade Hawk. All units were at Skill: 3. 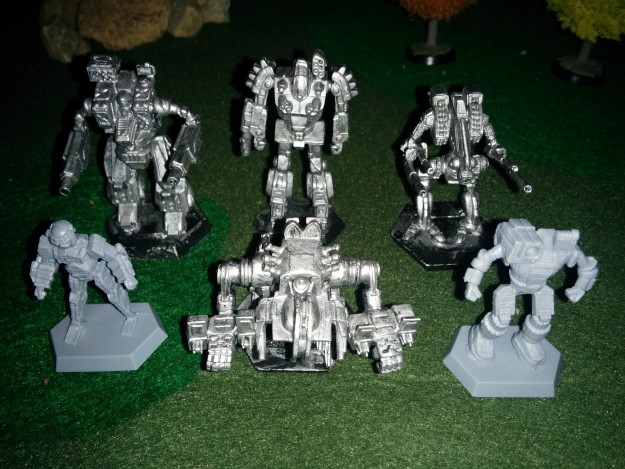 For Wolf’s Dragoons, consistency is the hallmark of success.

The Dragoons made a small change to their line-up this week, sticking with what they know. A Skill: 2 Nova accompanied by a Skill: 4 Commando, and a Mad Dog, Battlemaster, Hellbringer, and Hunchback all at Skill: 3. 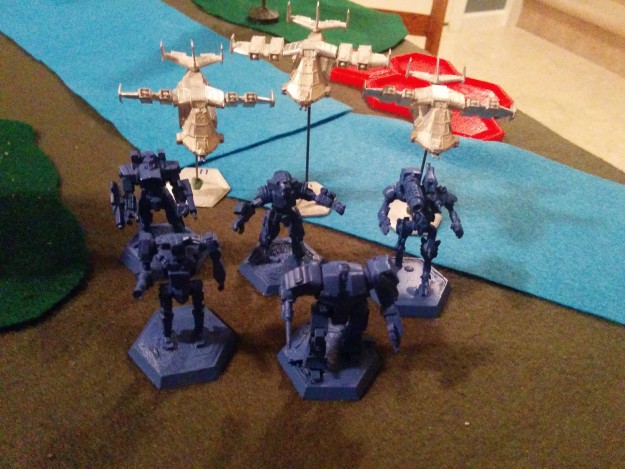 A lack of heavy and assault `Mechs did not blunt Clan Ghost Bear’s fury.

This one was a unique new scenario.

This one was a wild ride, I gotta say. Between having to protect your repair vehicles on their approach and repair turn, to harassing your opponent’s vehicles, one wrong move, and it would all be lost.

The Clan Sea Fox and Clan Ghost Bear players met for a game earlier in the day because the Sea Fox player would not be able to attend the session later that night. This game was brutal, and at the end of 90 minutes, neither player had earned a Scenario Victory, and the Kill Score was dead even, at four BattleMechs each. The result was ruled a Tie.

Clan Jade Falcon and Clan Ghost Bear squared off first, and both players launched all-out attacks at the Repair Vehicles, attempting to blunt the other force’s attempts to repair their respective Timber Wolves. The battle was intense, and it went to time. At the end of 90 minutes, no Scenario Victory was achieved, and Clan Ghost Bear was declared the victor with a Kill Score of 23 to 20.

Wolf’s Dragoons and the 5th Sword of Light attempted to maneuver each other into vulnerable positions, but neither side fell for the traps set by the other. In the end, the Dragoons slugged it out and were able to kill several Combine BattleMechs in the closing minutes of the 90 minute game. No Scenario Victory was achieved, and Wolf’s Dragoons were declared the victor with a Kill Score of 20 to 5. 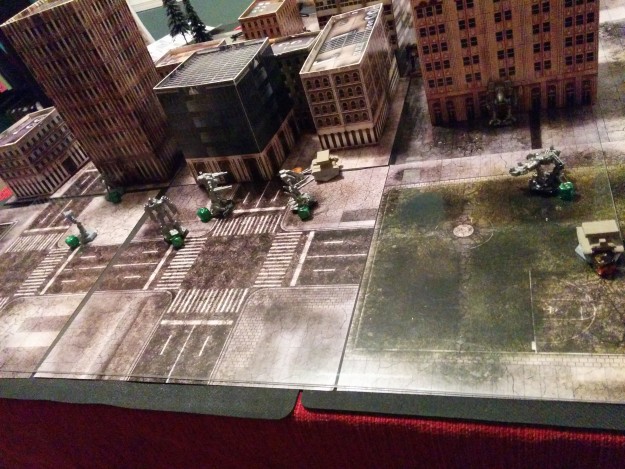 The city fighting made line-of-sight difficult.

Round 2 found the Draconis Combine fighting Clan Jade Falcon. The nimble and hard-hitting Falcons proved to be too much for the 5th Sword of Light to handle in the end, and the Jade Falcons were able to slip away with their Timber Wolf while exacting a heavy toll on the Combine troops. Scenario Victory to Clan Jade Falcon with a Kill Score of 20 to 18.

Wolf’s Dragoons attempted to blunt the Ghost Bear onslaught, but it proved for naught. The Ghost Bears assaulted with abandon, leaving their own repair vehicles and Timber Wolf completely unprotected. The gambit worked, as the Dragoons paid more attention to stopping the Clanner attack than to preventing them from achieving their objective. Clan Ghost Bear claimed a swift Scenario Victory and a Kill Score of 10 to 10. 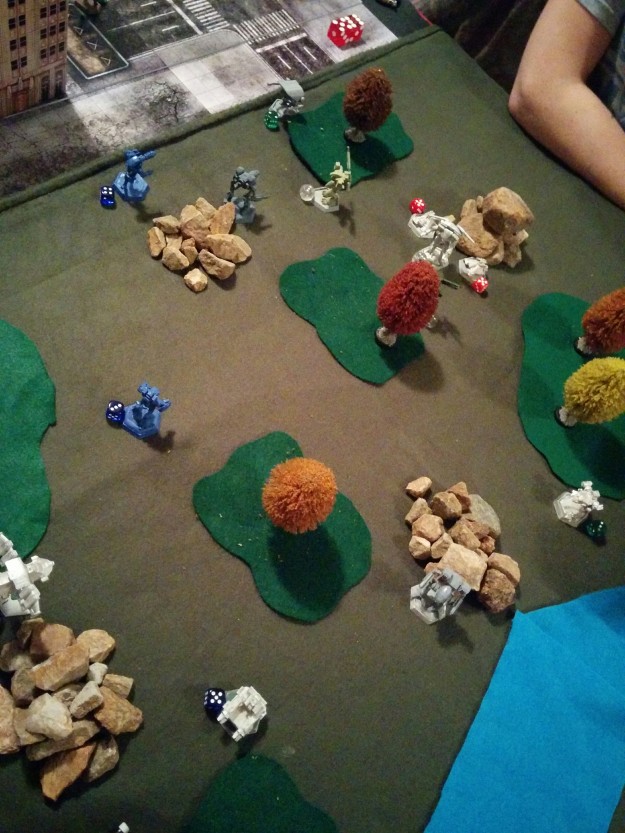 Neither Clan ceded an inch to the other when the Ghost Bears and Jade Falcons engaged.

After two months of gaming, Week 4 leaves us with a clear picture of a few things.

First, nobody is painting stuff! I know, I’m included in this. We’re just not getting around to it. I hope that changes soon.

We were so close to seeing the Clan Ghost Bear juggernaut fall this week! A Tie, however, is not a Loss, so the Ghost Bears remain undefeated. There are still a lot of games left to be played this year, far more than have already been played, but right now Clan Ghost Bear is sitting very nicely at the top with the Clan Jade Falcon and Clan Sea Fox/Mercenary players not as far behind as the standings might suggest.

Also, it looks like the House Davion player will finally be jumping into the fray! He’s confirmed for Week 5, so maybe he can shake things up as the Weeks progress.

*Note about the Standings. We went with a kind of NHL style formula for Ties, with a Tie counting as half of a Win for the purposes of calculating the Win%. We thought it was pointless to make a Tie hurt your Win% column just as much as Loss.

Week 5 of the 2016 Leader Board Season is scheduled to be played on Saturday, March 12, and will be the 1st Quarter Mega Battle!