The Inner Sphere was represented by House Davion (Yay! His job situation finally cooled off, and he made it to the Leader Board!) and Riley’s Raiders (Mercenaries). Each IS player was allotted 450 PV for their individual forces. The Clans were represented by Clan Jade Falcon, Clan Snow Raven, and Clan Ghost Bear. Each Clan player was allotted 300 PV for their individual forces.

We decided to actually have a scenario for the Mega Battle instead of just running around and killing each other willy nilly. Its terms are below. 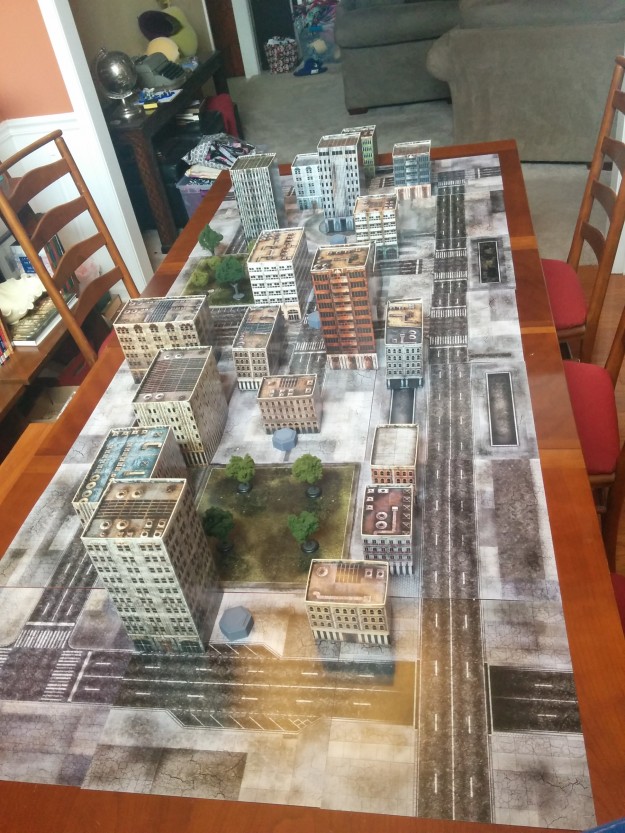 The board is set.

Here, I have to apologize. I did not take all the pictures I should have during the game turns. What pictures I do have are below, along with brief summaries of the Turns. 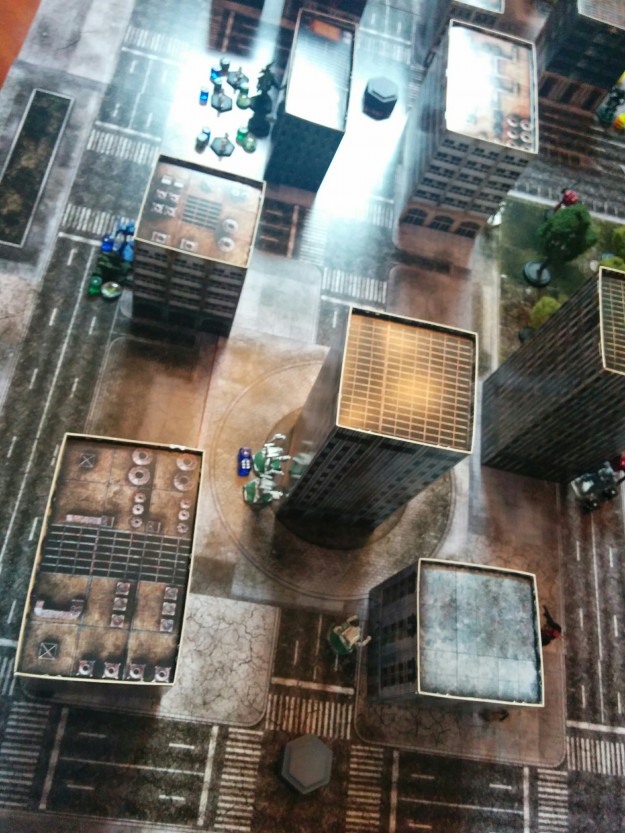 The city terrain played a major role in setting up engagements.

Bashkir fighters showed up this round and began runs on targets. The Clans took good advantage of their mobility and TAG equipped Battle Armor, raining down accurate Indirect Fire. The Inner Sphere forces moved in, weathered most of the fire, and began to establish fire lane positions on the objectives. 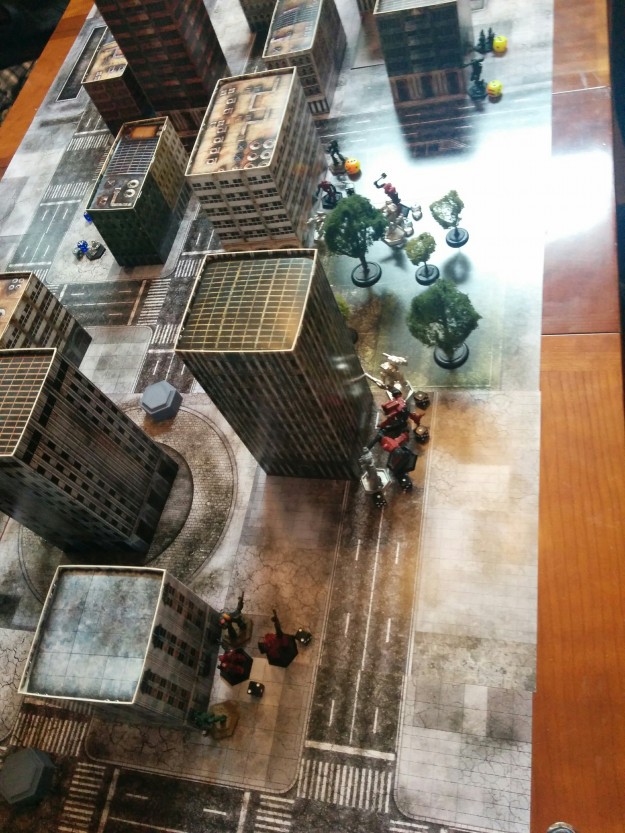 Riley’s Raiders and House Davion poke out to see if they can spot any Clanners.

Bashkirs coming back for their second pass of the game. Several units clashed, with both sides moving onto objectives, contesting and controlling as they could. IS forces begin to take casualties, while the Clan losses are minimal. End Phase sees Clans in control of 2 objectives, IS in control of 1, and 2 contested. 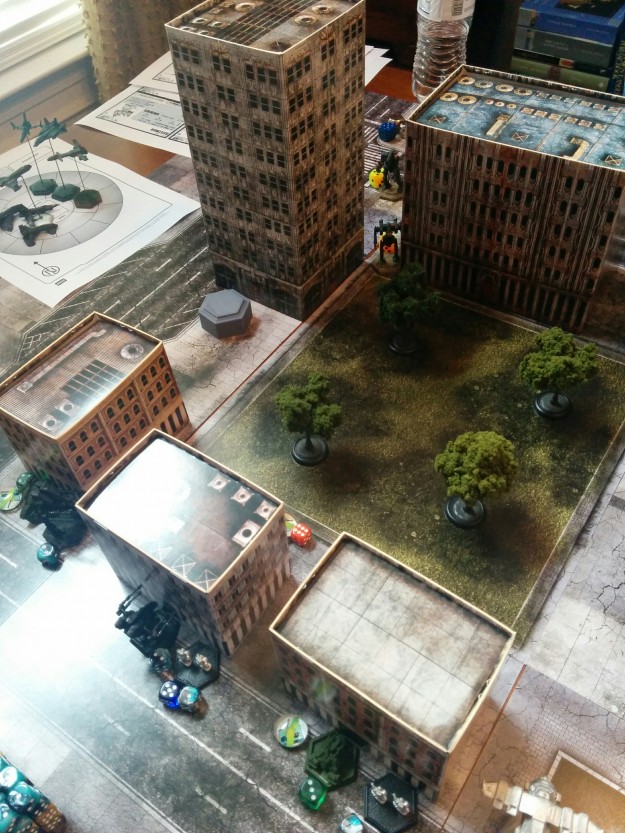 But the Clan forces are well hidden and await the proper time to strike. 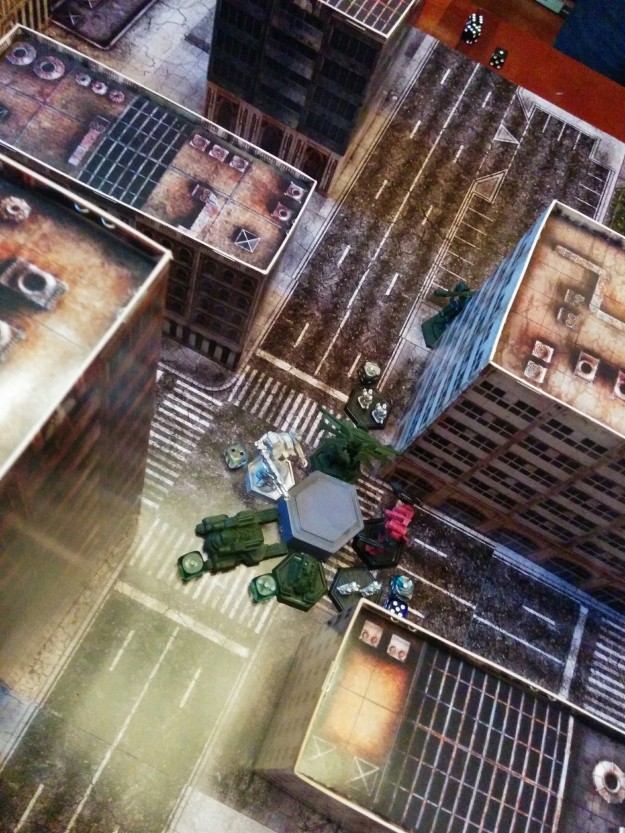 The fighting over the objectives was dirty and down to the bitter end.

The Clans claimed an Objective Victory over the Inner Sphere and exacted a terrible toll in unit losses. The Kill Score ended up 63 to 25 in favor of the Clans. As mentioned in the scenario rules, each Clan player received a Win and an Objective Win, while each Inner Sphere player received a Loss. Every play’s Kill Score stat went up by the team number (Clan players each got 63 KS, and IS players each got 25 KS).

The current standings after Week 5 are below.

We discussed it a bit afterwards, and we like the 300 PV level for forces. We might try bumping regular games from 250 to 300 in the next couple of Weeks to see if we like it better. We need to evaluate whether or not it will slow gown games enough to disrupt the 90 min time limit we usually play with.

Well, that does it for Week 5. I like how I did the lists this time, and I will start recording the lists each week in this fashion, just with pictures, too.

Currently, Week 6, the final week of Quarter 1, is scheduled to be fought on Thursday, March 31.