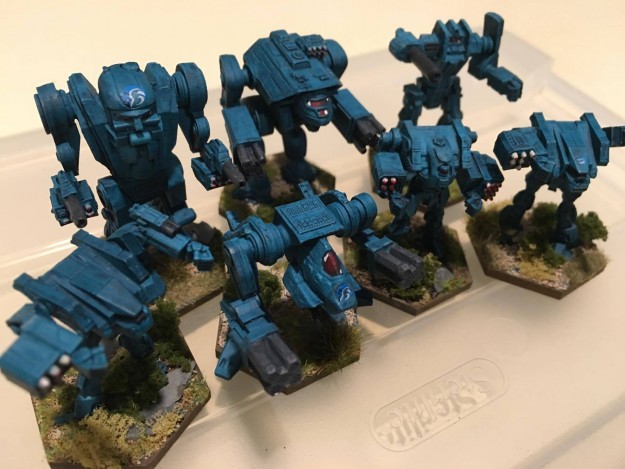 The Snow Raven forces showed up heavy and ready to deliver the pain. 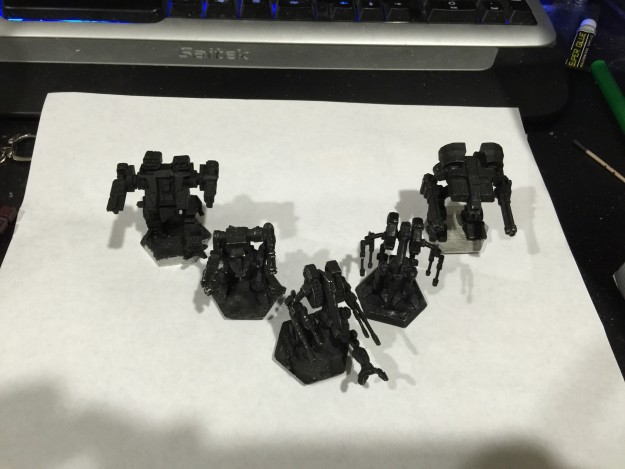 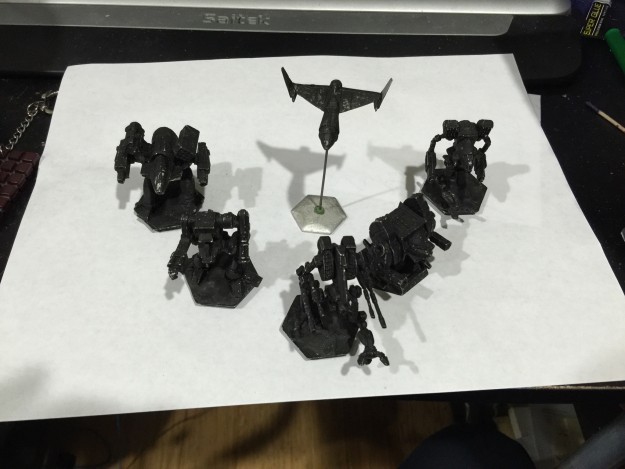 The Raiders conducted their operations this week with a C3 computer network to aide them. 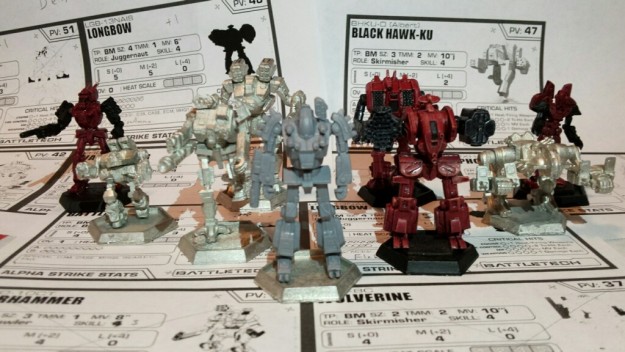 Usually preferring to defend, Clan Ghost Bear still showed up with an attacking force that hit like lightning. 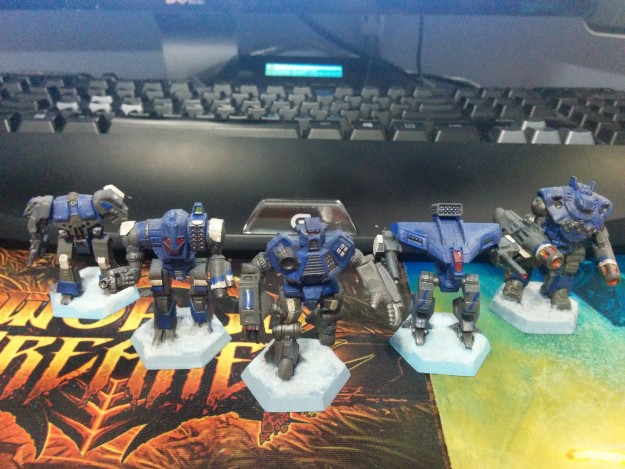 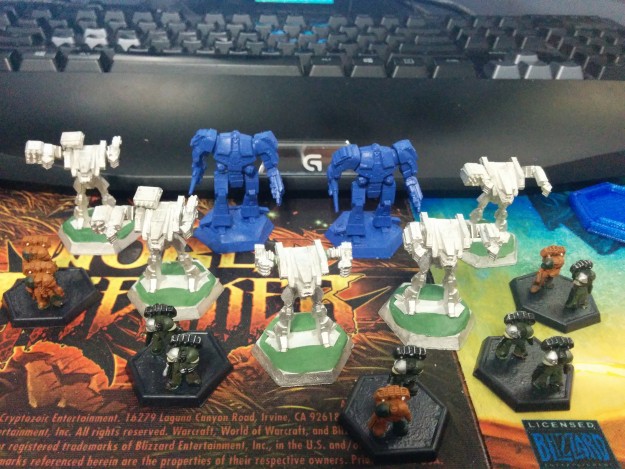 In this scenario, a desperate Attacker force must wrest three supply stores away from an entrenched Defender force. Both sides have attempted to scout out their opponents, and the stage is set. All Standard Alpha Strike rules (except any that pertain to artillery) are in effect, in addition to any other rules specifically mentioned in the scenario below.

Set Up: Begin by placing three (3) Objective Hexes 6” outside of the Defender’s Deployment Zone, with the left and right Hexes 6″ from each board side edge. The middle Hex is placed between the other two, equidistant from each. Deployment Zones for both the Attacker and the Defender extend 10” from their respective board edges.

Both players roll 2D6, with the winner of the roll choosing who will be the Attacker and Defender. Both players then take their assigned side of the board.

Determine which force has the higher Battlefield Intelligence (BI) score at this time.

Deployment and Turn 1: The Defender has the Initiative for Turn 1. Both the Attacker and Defender deploy their forces in their respective Deployment Zones following Initiative order (Attacker placement, then Defender placement) and with respect to any applications of the Hidden Units and Area Knowledge rules.

Roll for Initiative as normal beginning with Turn 2.

Game Time: Each game lasts for 90 minutes of clock time, starting with the roll to determine who will be Attacker and Defender.

Victory Conditions: Beginning in the End Phase of Turn 3, the Attacker may claim an Objective Victory by controlling all three Objective Hexes.

The Defender can win an Objective Victory by destroying 75% of the Attacker’s force before the game ends while also preventing the Attacker from achieving a Scenario Victory.

If the game reaches Time before either side has won an Objective Victory, then Kill Scoring will be used to determine a winner.

Special Rules: The following rules will be in effect for this scenario.

Here I have to apologize. I only grabbed a few pictures of the battles, and even then only in the final Round of the day.

Unfortunately for the Raiders, this game ended very quickly with the Clan Ghost Bear forces snagging a swift Objective Victory in Turn 3. The Raider’s set up defensive positions near the objectives with good overwatch and fire lanes, but the multiple Fire Moths with their accompanying Battle Armor proved to be too difficult to shoot off of the objectives.

The traditional enmity between these two Clans found a familiar hold as the Sea Foxes invaded the Snow Ravens’ territory. Clan Snow Raven fought bitterly to the last man, ultimately succumbing to the fury of the attacking Sea Foxes. Clan Sea Fox won a default Scenario Victory by eliminating all of the Clan Snow Raven’s units. 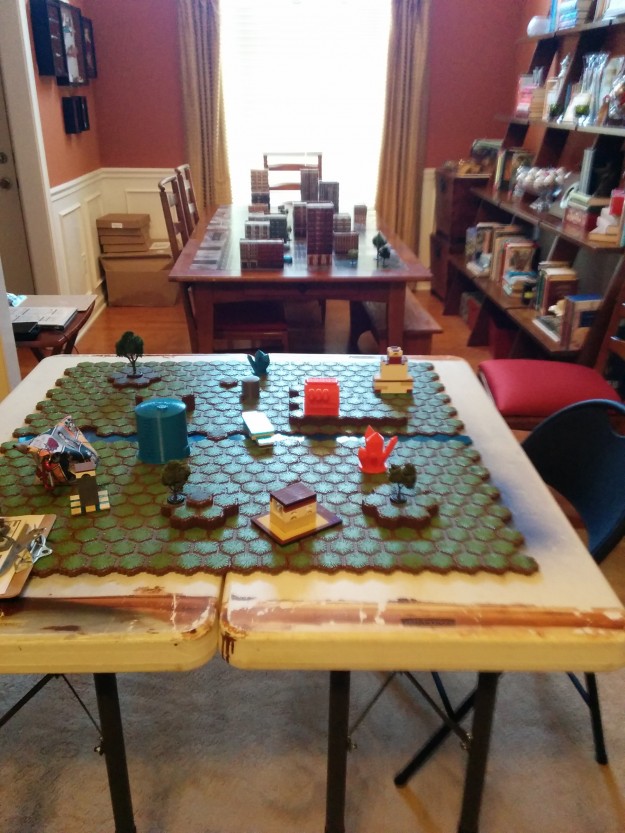 The fields of battle, all set for the day’s destruction.

The Ghost Bear defenders took early losses, losing the Bruin in Turn 1 and the Kodiak in Turn 3. The remaining Ghost Bears fought on, however, taking advantage of the units’ jump jets, slowly but surely grinding down the Sea Fox attackers. In the final turns of the game, Clan Ghost Bear took out the last Sea Fox `Mech that was needed for a Defender Objective Victory.

The Raiders went on the offensive for Round 2, this time trying their luck with Clan Snow Raven. This proved to be more fruitful for the Raiders, as the mercenaries are able to push the Snow Ravens back and eventually lock down the Objective Victory.

In what was the bloodiest fight of the entire day, Clan Sea Fox mounted a heroic defense against the C3 equipped mercenaries. The fight bogged down to a slugfest, with neither side giving tactical ground to the other. Eventually, Clan Sea Fox came out on the top of the grind game, delivering the kill shot to the Raider’s final BattleMech and claiming a Defender’s Objective Victory.

The Snow Ravens exercised a controlled and measured approach to the battle, focusing on taking out the Ghost Bear threats in order, one at a time. Meanwhile, the Ghost Bear defenders picked off units as they could, including the aerospace fighter (but not before the fighter finished off the Bruin). In the final, furious Turns of the game, a lone Ghost Bear Grizzly held the line against a Snow Raven Mad Dog, a Sotrmcrow, and a Linebacker. A single hit from the Grizzly on either the Linebacker or the Stormcrow would have meat victory for Clan Ghost Bear, but that was not to be. Time ran out, and victory in the match was awarded via Kill Scoring to Clan Snow Raven. 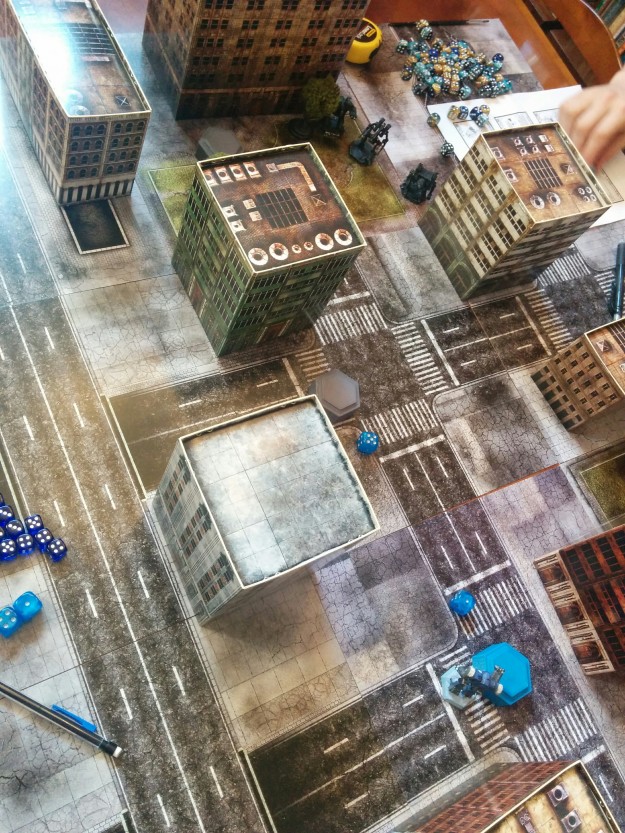 One of the few shots capturing the day’s action. Clan Ghost Bear fails its final roll to take out a Clan Snow Raven `Mech.

We were certainly glad to welcome a new player to the group, and he certainly showed up to play, with painted models even!

Clan Ghost Bear suffered its first defeat of the 2016 season, bringing the five Week undefeated streak to an end. Clan Ghost Bear is still a force to be reckoned with within the league, however, but with the new blood that has recently been added, I would expect things to be shaken up a bit more in the near future.

Moving into Quarter 2, especially as the league looks like it will be adding new players, we will need to look at what the year long average of games played might look like in order to set a baseline for determining top performers at the end of the year.

I see the cut line as kind of a playoffs, of sorts. Most definitely, the deciding factor will be total games played. Right now, the average number of games played is about 6.