I would for a moment call attention to a heartbreaking thread on the MechWarrior Online forum. A young Jenner pilot, Sarah Marie Alida Parries, of Vancouver, British Columbia lost her battle with brain cancer last week. At just five years of age she played with her favorite mech, a Streak SRM-equipped Jenner because she liked locking on. Her catchphrase has been said when playing to be “Got ’em Good!” 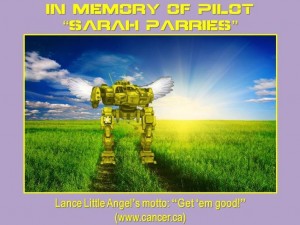 More amazing than the fact that she was only five years of age and the fact that  she was most likely under a lot of stress with constant hospital and doctor visits was the absolutely heart-touching response from both forum members and admins at both MWO and BattleTech.com – where I first read of this tragedy.

From simple, heartfelt sympathy to links and pledges to cancer charities to even calling for vote for the creation of a cockpit item or a Champion “Sarah-phim” Jenner to be created in her name. With proceeds going to cancer research, even.

The official fundraiser thread vote as of this writing has 894 votes for a dedicated hero Jenner for charity.

A dedicated MWO player in Germany even made a tribute video where he and some of his chums  “Got ’em Good” in Jenners; harassing heavy ‘mechs almost like a herd of ornery children with a school recess monitor. This is one of those rare times when the internet really sparkles.

Bargained well, and Get ’em Good!

6 thoughts on ““An Angel Has Fallen””