I reviewed Ep0ch last year during my mobile game round up series. First released in 2011, Ep0ch is set in a post-apocalyptic city besieged by warring robots used as soldiers by rival corporate AI. You are Ep0ch, a kind of bodyguard robot called a guardian in search of Princess Amelia; your charge. Built in Unreal 3, Ep0ch was the most graphically advanced game I had seen at that time on a mobile platform. The campaign was linear, but there was an arena mode to rack up credit and experience points to upgrade yourself. It played like rail shooters such as Time Crisis; only in third person with you swiping to move Ep0ch in and out of cover to get a better firing angle on or avoid the fire of various robot enemies. Weapons were numerous, as were support systems and armor upgrades.

Ron: I recently spoke to Ed Orman of Uppercut games; which developed Ep0ch and its sequel, Ep0ch 2. From what I’ve seen from the trailer, Epoch 2 initially seems very similar. In the original, the environments seemed pretty close in, with lots of dark alleyways and ruins to fight in. The sequel seems to be much more open and dynamic with both its setting and its 3rd person view. What’s changed this time around?

Ed: With EPOCH 1, we felt like we had only just started scratching the surface (if you play the Arena mode, you’ll see we started experimenting with more varied layouts). We really wanted to be more ambitious and open up the player’s movement and cover options in EPOCH 2. So we brainstormed all kinds of ideas, including the hovering barges that you fight on and against, the moving platforms in the factories and of course the giant train. Plus we added more variation to the types of cover, so you get more combinations of cover types, hanging from moving objects, etc. The whole game feels more dynamic.

Ron: It looks like missiles are now carried externally on launch rails. What other changes can we expect in the weapons and equipment?

Ed: Missiles on your back was a visual we always wanted to show but didn’t have time previously. So in general, we wanted all of the player’s equipment to be physically represented in some way. It makes the Scrapyard a much more interesting place when you’re scrolling through and comparing different pieces of equipment.

Ron: It reminds me of a character building screen, where every armor type or weapon is tried on visually as well as shows game stats.

Ed: And of course, we’ve doubled the number of weapon types, added new Boosters and Counters, and the armour system was completely reworked to support new visuals. Overall, the equipment in EPOCH 2 looks better and is much more fleshed out. 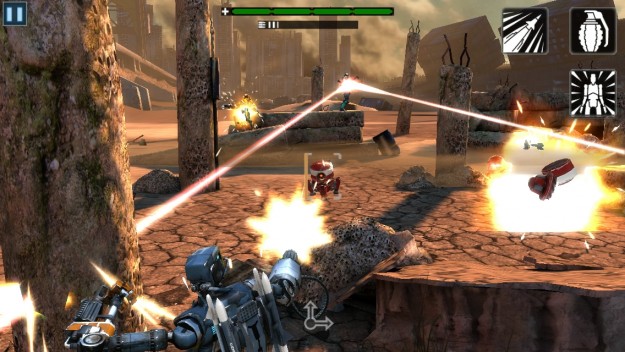 Ron: What inspired the robot/AI designs? They look like old, discarded industrial machinery but seem to be much more competent than, say the droids from Star Wars for instance.

Ed: The world of EPOCH was conceived as a place where humans had become totally reliant on robots to do everything for them, so there were thousands of different types fulfilling different roles. But then, the Big Two Artificial Intelligences took control of every robot in their war against each other, and all these robots got re-purposed to be soldiers, and we’ve tried to reflect that in the new enemy and armour designs. So you’ll see that we have construction workers, junkyard scavengers and even surgeons as a basis.

Also, it’s worth mentioning amazing concept artist Andrew Ley, who did the robot designs. We were very much inspired by an old piece he did, which you can see here: 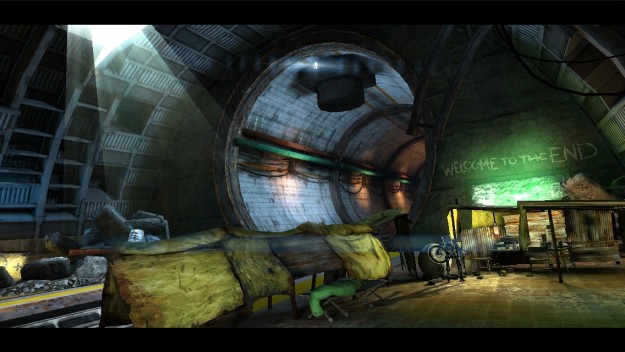 The post-apocalyptic world is moody, gritty, and surprisingly well rendered.

Ron: Post apocalyptic and society upheaval seems to be all the rage right now. What inspired the story and the characters?

Ed:  I’ve always been a fan of the PA genre, mostly because I like exploring what people (or in this case, machines) do with the left-overs of a world that has collapsed. And as I said above, the key idea for the world of EPOCH was to set up a society that had grown completely dependent on robots, and then explore what would happen if suddenly robots stopped doing what they were told. It’s deliberately taken to a ridiculous (and hopefully, sometimes humorous) extreme.

Ron: I haven’t unlocked every transmission in the first game yet, but the country it takes place in seems ambiguous. Any modern day parallels?

Ed: Deliberately ambiguous! There are components of modern-day America and England – America because of the culture and technology, England because of the presence and importance of royalty.

Ron: I don’t think I’ve ever seen a game that took place as a series of recovered texts and communications (as Ep0ch pieces together what happened) before. It’s refreshingly different. Why go with this instead of a standard linear scene-based progression of the story?

Ed: That’s a concept we lifted from our work on Bioshock – in that game, you encounter some living people and there are cutscenes, but the majority of the back story is told through the various diaries of people you find scattered around. That technique was a good fit for us, because of the time and budget limitations we had.

Ron: You mentioned that the original Epoch was to be released on the PC. Will that be on the Steam or Desura networks?

Ed: As I write this, EPOCH 1 has literally just launched on Steam :)

Ron: The control scheme is fiendishly simple for mobile devices. How will that translate in the mouse and keyboard world?

Ed: We didn’t even try to translate it! We knew that PC would need to play differently, so we threw the mobile controls out and started from scratch. It’s all mouse-and-keyboard driven on PC, with the reintroduced skill of player aiming becoming very important.

Ron: Thanks for your time, Ed. I’m fairly deep into Ep0ch 2 as I write this. As I said before, the designs look the same, but there are more of them. They do look enhanced with even more weapons. The scenes are much larger and dynamic, with higher resolution than Ep0ch. This helps contribute to its greater file size- about 1.5 gigs. I think that the greatest difference is that there is a fully rendered and voiced human in the game.


Princess Amelia; Ep0ch’s charge, has been wounded and is in cryo-stasis but can project her consciousness through a holographic persona. She acts as your support, and directs you to various stages to accomplish tasks as well as provide exposition. The scrapyard and message intercept system is back from the past game. I was pleasantly surprised to have started off with a better main weapon when the game detected that I also had Ep0ch 1 installed. It’s a nice touch.

Another nice touch is that the various main weapons work differently than just point and shoot. The weapon I have now is a long, large bore energy weapon that you charge up to fire much like the MechWarrior IV bombast laser. A small minigame you play to reload while under cover can grant you extra weapon power. There are other small minigames like this throughout the game.

Like the original, Ep0ch 2 offers In-App purchases to add credits to buy upgrades, but I’ve never felt like it took terribly long to afford anything just by grinding a bit. The game tosses extra gear at you periodically as well, which you can use or sell.

Over all, I’m probably about as impressed by Ep0ch 2 as I was with the first even if the graphics on a mobile platform weren’t as much of a shock. It’s a 3rd person shooter with a lot of robot busting appeal, and I’m not sorry to say I’m a bit hooked.