Looking like what would happen if Blade Runner took place next door to Cloud City on Bespin, Strike Vector is an upcoming ‘indie’ game created by Paul Chadeisson, a French Graphics and visual effects artist. And his passion for rich, intricate backgrounds is quite evident when you look at the concept and the 3D art included with an article in the In the Real Life on Kokatu. 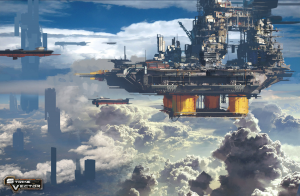 Strike Vector is a first and 3rd person aerospace combat shooter with a bit of a twist in that the fighters can transform to a degree. It’s doubtful we’ll be seeing Phoenix Hawk and Stinger LAM-style action. The environments here really don’t seem to require ‘Mechs in the same vein that you’re not likely to see many sports cars in Venice.

Being produced with a staff of just four, Strike Vector is a very ambitious game. From what I see here on the video, Strike Vector reminds me of Third-person shooter type games like Colony Wars and Super Dimension Fortress Macross for PlayStation 2. The fighters themselves function on a tilt-jet design; twin engines located along the side of the fuselage that pivot amidships. The weapons appear to be an array of missile spreads and rotary autocannon. 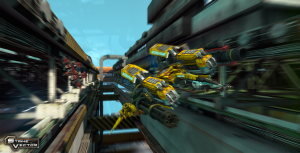 Coming from the design team:

Chadeisson has previously worked on the PS3/X360 game Remember Me and on the Disney animated show Tron Uprising creating backgrounds. You can also follow Strike Vector on Facebook and Twitter.