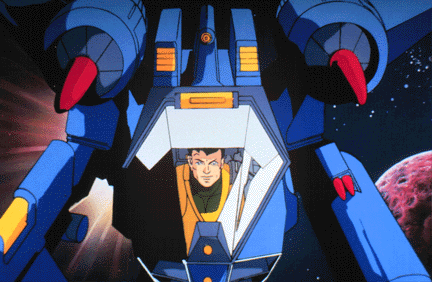 Exosquad didn’t pull any punches either. Genocide, forced starvation, concentration camps, political intrigue, and post-traumatic stress were relevant and very visible in the show’s storyarc. Maybe it’s because I was well into the BattleTech novels at the time, but the grand epicness of the show really made me think this was what the BattleTech animated series should have been. This was a fight for humanity itself on an interplanetary level. It of course helped that mecha were the center technology of the series; from BattleArmor to light ‘Mechs.

Visually and audibly, Exosquad was unimpressive. The Exoframes and other vehicles looked… well, ugly as sin. There were many types, but most appeared to be patterned after the Power Loader from Aliens. This seemed pretty realistic and a really neat idea for someone who had only seen mecha controlled from cockpits previously. Unfortunately there were continuity errors aplenty with their technology. Gun barrels firing in one scene and launching off as missiles the next was a common issue as well as the hit-or-miss sound effects. 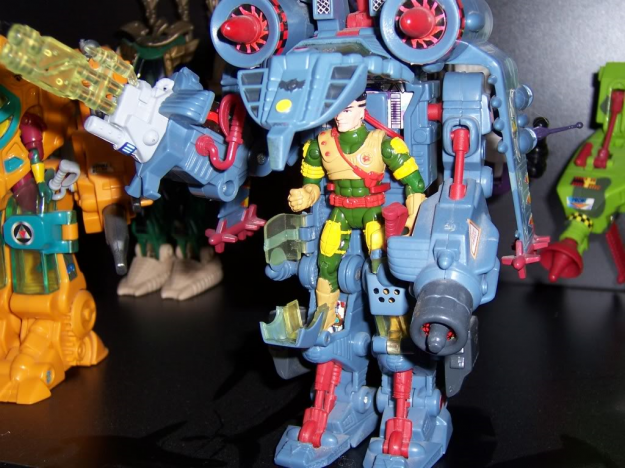 To be fair- the toys were pretty neat.

There were also conflicting colors everywhere that really made no sense outside of market research circles that said little kids like brightly colored toys. The same went for the character uniforms and, my god, their hairstyles. The animation was also very substandard; on par with most of the cel animation for the time, but I admit I was spoiled by the better looking Japanese animated shows, and even some Western landmark shows like Starcom: The US Space Force; whose animation really stood out compared to their contemporaries.

But the main draw for the show was as I said, its story. While a war story set in space is nothing especially novel; even then, for something marketed at kids this was really different and new. Here was a cartoon where racial bigotry was actually one of the lesser themes compared to all the other evil things people did to each other.

The show centers on Able Squad, a team of Exoframe pilots roughly equivalent to a fighter squadron lead by Major J.T. Marsh. He was level-headed and didn’t play by the rules and was more concerned with getting the job done and keeping his squad safe than obeying superior officers. If his captain did or ordered something Marsh thought nonsensical (which was often in the first season) he called him on it. Usually to his own cost. The character reminded me a bit of Pappy Boyington; a Marine fighter squadron commander from World War II who was famous for similar behavior. The squad is packed with some very different personalities; and naturally part of the entertainment was from how the squadmates interacted with each other. The show lasted for two seasons, so there was twice the time to develop the characters compared to the BattleTech cartoon- who interacted in some similar ways. 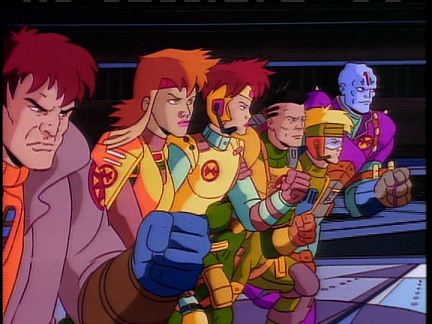 The story starts off with space pirates attacking a freighter, and a united Earth government rattling sabers at each other on what they should do about the growing trend of pirate attacks. Phaeton, a Neosapien; a genetically-engineered human and the governor of Mars, convinces the government to dispatch the bulk of the Terran navy, the Exofleet, to hunt down the pirates. But while they were deployed towards the edge of the solar system, Phaeton enacted a series of surgical strikes and a secret military he’d been building to take over Earth and the inner colonies and their resources. This part of the plot is VERY reminiscent of Hitler’s secret military buildup of the 1930s and subsequent Blitzkrieg war of the late 1930s and early 40s.

The Exofleet suddenly finds itself cut off from support, yet still manage to organize a dedicated resistance movement on Earth and Mars. The Neosapiens use the humans as slave labor for the most part, and incredibly, starve the rest and even send some into the sun on modified garbage barges. The show also touches on human turncoats who enjoy a slightly higher status in the ‘Neosapien order’ in exchange for informing on rebels or even using the media to guide the masses into complacency. This was some really heavy stuff for kids to grasp back in the ’90s. As boys we really aren’t exposed to war outside of plastic toys and knocking bad guys over. And most cartoon shows, like GI Joe only reinforced it by showing combat in a safe and kid-friendly way. It was a kick in the butt that I for one am pretty grateful for.

Overall I enjoyed the show then and I enjoy it now. Its ugly but the message about the horrors of war and human nature has probably never been more relevant. And it only goes to show that good writing and execution will be remembered long after the kids grow up and stop playing with the toys the marketing department hawked in stores.

9 thoughts on “Anyone Remember Exosquad?”