Apologies for the relatively click-baity title, but it sort of fell out of my head and it’s very descriptive. Plus, most of it comes from the Reddit thread where I found these works of art, so I can’t be entirely held responsible.

That argument holds up in court, right?

We have Reddit user TheTwist to thank for taking time out of his life to take some old MechWarrior Online clipart and paste it into even older classic paintings. Actually, that’s selling his work short: these were previously extremely detailed marketing drawings, and making them look like super old oil paintings must have taken a lot of work. 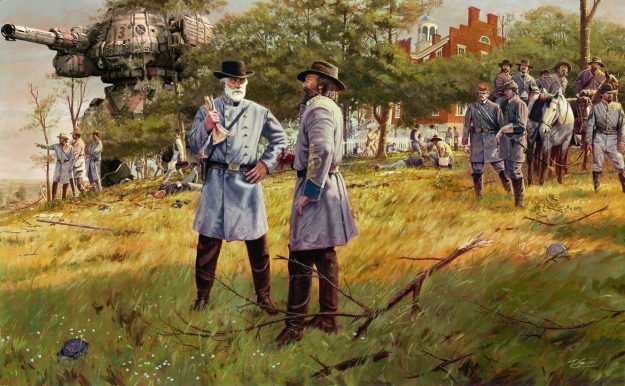 We’ll start with what will obviously be a fan favorite simply for including an UrbanMech, the most mysteriously popular ‘Mech in all of Battletech. Somehow, the Confederates seem to have gotten hold of 31st-century technology and are using it to hold on to… some sort of school. Maybe a church? I know nothing of this painting, and as a proud Canuck, next to nothing about the American Civil War.

So I reached out the artist themself and got the lowdown on how they did it. The painting is called “Tomorrow We Must Attack” by Dale Gallon, and depicts General Robert E. Lee and Stonewall Jackson plotting before some sort of battle. Probably the one that they lost. Whichever battle that was. 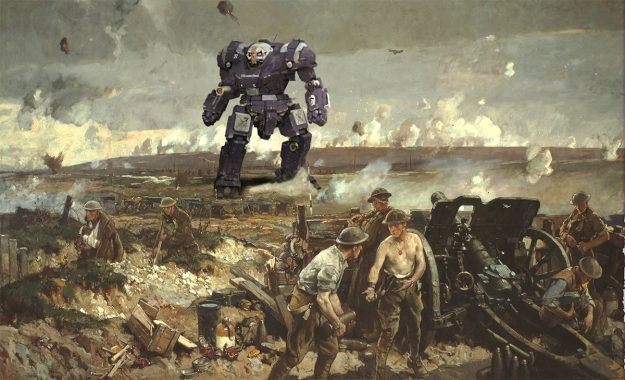 Moving on to another fan fav, the Atlas here is plunked straight in the middle of Vimy Ridge, a battle that as a Canadian I can take some particular pride for remembering the name. The painting is descriptively called “Battle of Vimy Ridge” by Richard Jack and shows the Canadian Corps bombarding the German-held ridge just before the Canuck’s relentless advance.

Somehow, I think the Canadians would have had less success if the Germans had a lance of Atlases on their side. 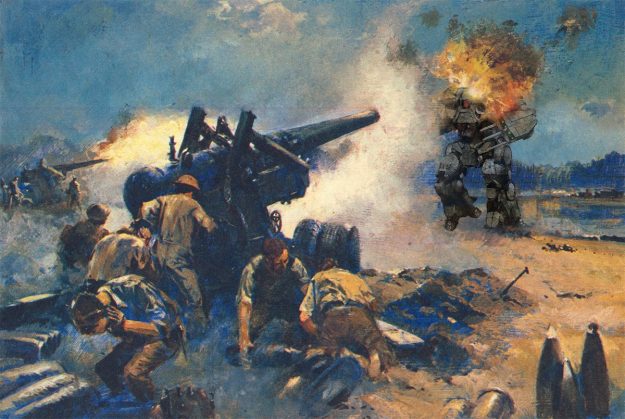 Next is “The War of the Worlds” by Terrence Cuneo, which was actually used as the cover art for an edition of H.G. Wells’ War of the Worlds. The Kodiak you see getting hit by a 24-pound artillery round would normally be a Martian walker, but somehow a giant Ghost Bear assault ‘Mech seems far more menacing. 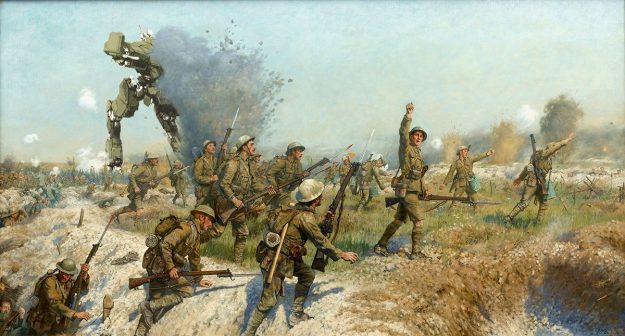 In “Battle of the Somme: Attack of the Ulster Division” by J. P. Beadle, we see a Locust supporting British troops just as they head over the top, as they used to say. Instead of the first ever tanks deployed in military combat, we see a 20-ton scout ‘Mech. One wonders which would be more effective. 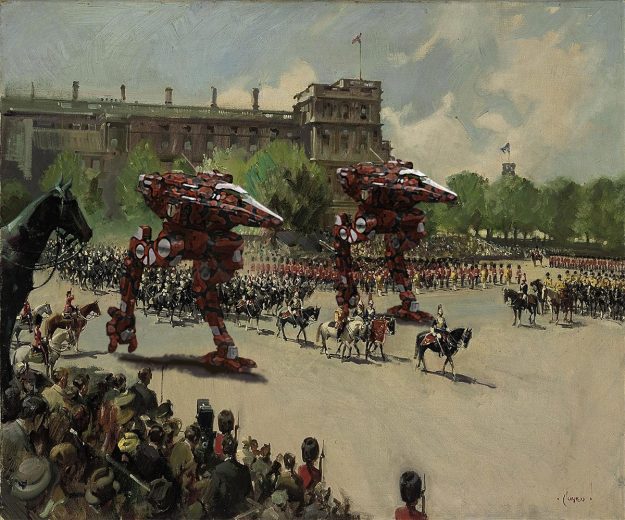 Finally, we have “The Tirailleurs De La Seine At The Battle Of Rueil Malmaison” by Étienne Prosper Berne-Bellecour. This one actually shows a scene from the Franco-Prussian war of 1870, with the Centurion lending support with its twin Medium Lasers.

I think these are great, and maybe even worthy of a desktop background if they could come in higher resolution. Which they do on TheTwist’s Imgur page, but not quite enough to be in HD. Still, a little blurring of the lines would only improve the effect of inserting a giant robot into historical battle paintings.

6 thoughts on “Artist Photoshops ‘Mechs Into Classic Paintings, And The Results Are Hilarious”