Today we have a guest post from Sam van Ratt, who will be sharing a retrospective on two BattleTech video games from nearly 30 years ago, called MechForce and MechCombat!

Take it away Sam!

A hello to all BT fans out there!  Today I would like to introduce you to my favourite BattleTech Game: MechCombat from Ralph H. Reed. 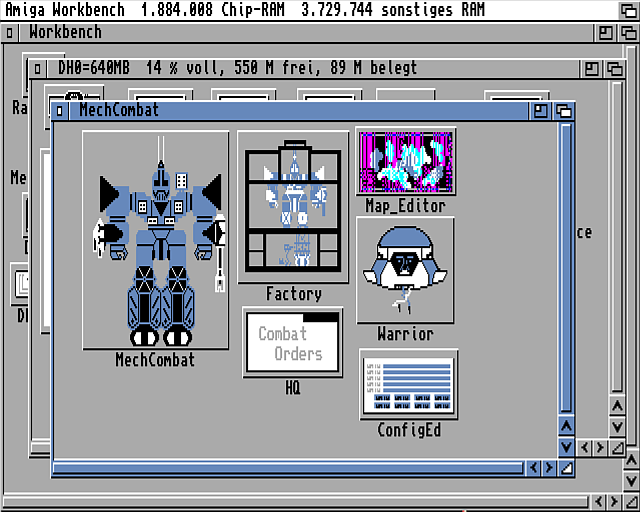 A bit of my history:
In about 1990 I was introduced by a friend to MechForce. The first battle was disastrous and I was not very happy, how complex this simple game was, so the learning curve was (in my case) quite shallow until I read the BattleTech rules and found out how to use a ‘Mech proper and therefore being able to pilot it according to its best abilities. In 1991 I bought my first own copy of the game (must be about V3.70) which came with a big archive of different ‘Mechs which expanded the possibilities tremendously due to more complex NPC scenarios. While studying in NYC I arranged “mass-orders to Germany” (well from 1-3 pieces each time) to limit sending costs and was able to get always the newest version :-).

About the beginning of 1993 I received (my last “quantity-orders”) an additional disk with MechCombat on it, which looked very similar to MechForce, but was already V4.00. At first it appeared quite ordinary and very disappointing as my custom ‘Mech creations could not be used, nor the warrior/techs/companies I nourished with my own ‘sweat & blood’ (…and crumbles of my cookies). My look into it was therefore very limited. I asked for a conversion program or help files but didn’t get one, not even a reply. I read in a Amiga/Games news group, that there is no conversion kit available (or possible?) and you have to start anew from scratch, which was a killer-criteria for me.

After about 10 years in playing MechForce it grew somehow boring as I rarely lost, the ‘Mechs were far outdated, as all the BT books talked about newer ‘Mechs and not stuff of 2750. At that point I already had arranged a lot of nice add-On tools like HQ or MechForceHQ and alike which made gaming and gaining much easier compared to how I started ten years earlier. I had created about 60 different ‘Mech designs and have been very proud about all of them.

In 2007 I started digitizing all my media to disk/online storage. At 2010 I came about the additional disk from Ralph. I reinstalled my Amiga and installed the disk to my best knowledge. It worked instantly (no wonder due to the close similarity to MechForce) and I failed in the first 10 fights about 8 times. I switched back to MechForce and succeeded in 10 from 10 times. I failed because in my version all my opponents were CLAN, while I [as Playing Character starter (rookie=green level)] had only Inner Sphere types and just what I could afford. I switched to easy in combat and got my first successes and Yes: the Level 2 Rules allowed complete new designs and ‘Mech types and the map was much bigger.