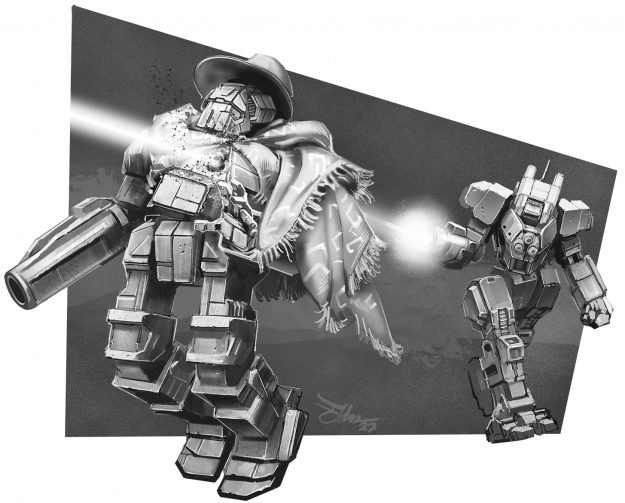 “Alright, McCoy,” said Joseph Andoran without preamble. The rotund CEO of Andoran Industries Ltd. was the utter picture of a fat cat corporate executive even though Andoran was one of the smaller suppliers to bid for Star League’s lucrative defense contracts. “Tell me your plan to corner the market on bandit-hunting periphery ‘Mechs.”

“Yessir,” McCoy began, pushing his glasses up as a nervous tic. “As you know, the Star League Armaments Act calls for an inexpensive ‘Mech to defend the outer periphery worlds. Our proposal, the Clint, will be priced competitively–technically at a loss, at least to start, but we’ll make the C-bills back selling more lucrative supply and maintenance contracts.”

McCoy stepped forward with a datapad covered in charts and numbers. “As you can see from my analysis, by outbidding our competitors, we can be the sole supplier of outer periphery ‘Mechs by 2610.”

Andoran was typical of corporate executives but for one thing–he actually loved the numbers. He carefully reviewed the datapad, scrolling every so often and highlighting some lines that drew his attention. Then he looked back up at McCoy sitting uncomfortably across his desk, like a student who’d been caught cheating on his exam.

“Take a look at the component values I’ve highlighted. If we replace the ankle actuators with our own BF-349s, the left finger motors with TT-560s, and use that new gyro the boys in engineering have just cooked up, we won’t even need to take a loss.”

McCoy stared for a few moments. “But sir, these are proprietary components. We’ll need to send our own technicians to the outer rim to service these ‘Mechs. Even routine maintenance might need a requisition sent straight to Bell and back again.”

“And how is that a problem?”

“These machines will be operating for extended periods away from refit facilities. Some might never power down in a full ‘Mech gantry again.” McCoy stopped to once again press his glasses back over the bridge of his nose. “It will significantly lower the Clint’s appeal as a suitable candidate for the Armaments Act.”

“You let me worry about the pencil pushers at Star League procurement,” Andoran replied, reaching into his desk drawer for a cigar. “You just worry about making these changes unnoticeable to the casual observer.”

McCoy coughed as Andoran blew out a perfect ring of smoke. 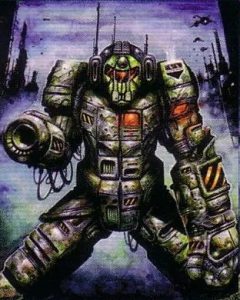 One could argue that the Clint largely suffers from the “40-ton curse,” a weight bracket much maligned for offering no real advantage. It has none of the armor or firepower of larger medium designs, nor does it have as much mobility as lighter ‘Mechs. Of particular issue is the heavy Armstrong J11 AC/5, which combined with its single ton of ammunition, accounts for almost a full quarter of the Clint‘s weight while offering only half the destructive capacity of its secondary armament of twinned medium lasers.

However, the Clint’s flaws go far beyond its unfavorable weight class and underpowered armament. The Clint was designed from the start to be a flawed machine, using substandard components in order to ensure periphery states and national garrisons signed expensive maintenance contracts to keep their Clints functional. Ironically, it may be the anti-customer design of the Clint that actually allowed so many examples to survive beyond the Succession Wars when many of its contemporaries died out.

The Clint was first chosen in 2607 as the successful candidate to the Star League Armaments Act, which required even the most remote settlements receive the latest in defensive technologies. That meant the Star League was legally required to provide BattleMechs to every garrison, regardless of location, population, or even military need. 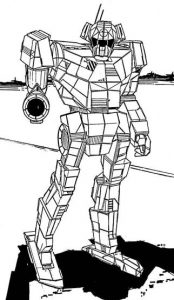 That said, Star League budgetary restraints weren’t unlimited, and even the Star League Defense Force wasn’t about to provide every periphery garrison outpost with its own company of Atlases and Orions. Above all, the Clint was designed to be cheap–at least, to purchase. Maintenance would prove to be so nightmarishly expensive that many Clints survived into the 31st century only as Franken-mechs repaired using the spare parts of completely unrelated designs.

When Andoran Industries Ltd. won the bidding to fulfill Star League’s requirements for an inexpensive recon and trooper ‘Mech to send to the far corners of the Inner Sphere, the company undercut the competition by fielding a design that slashed production costs any way it could. This was often to the detriment of the Clint‘s technicians, which found themselves spending twice as much time maintaining the Clint as they would almost any other BattleMech. Using subpar and nonstandard parts, Andoran Industries sold the Clint to remote locations alongside a lengthy brochure outlining tiers of exclusive maintenance packages–packages many militaries were forced to sign in order to maintain access to Andoran’s proprietary Clint components.

Much like a certain 21st-century agricultural equipment producer, Andoran’s plan was to completely control the market by undercutting the competition and restricting the customer’s ability to repair their machines. Mass production of the CLNT-2-3T began in 2608, with both Andoran Industries salespeople and technicians traveling from Bell to every corner of the Inner Sphere to either sell more or maintain existing Clints. 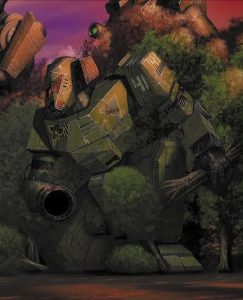 By the time the first Star League fell, roughly 300 Clints were serving in various House garrisons with the bulk in the hands of the Federated Suns and Capellan Confederation. Usually too far from the most intense fighting, few Clints took part in the First Succession War, which saw the Andoran factories destroyed in 2812. This ended the supply of replacement parts for the Clint, which further discouraged commanders from using Clints in heavy fighting. It also encouraged more creative solutions in the periphery to keep their Clints operational. While jury-rigging replacement actuators was possible if not ideal, replacing the Clint’s proprietary gyro proved too difficult even for the most resourceful technician. For centuries, a cored Clint was a dead Clint forevermore.

By the 31st century, only 200 Clints remained in active service. These machines were largely in Capellan and Fed Com border regions, having survived the Succession Wars but still badly in need of replacement parts. Those parts would finally be provided in the mid-3050s with the birth of the Bell Refit Yards, which was built on the wreckage of Andoran’s old factory complex. An extensive maintenance and upgrade program began to breathe new life into the venerable design, improving it far beyond Andoran’s purely mercantile ambitions. Blueprints were also eventually obtained by Defiance Industries on Furillo, which began producing all-new Clints for the first time in 3055.

Of those upgraded Clints, perhaps the most numerous is the CLNT-2-3U, a Capellan upgrade that replaces the weighty and ammo-dependent AC/5 with a Magna Firestar ER PPC and replaces both medium lasers with Magna 400P medium pulse lasers. To handle the significant increase in heat production, the 3U swaps its single heat sinks for double heat sinks. This simple and relatively cheap upgrade vastly improves the Clint‘s overall combat performance and eliminates at least one of its vulnerabilities, although it still requires increased maintenance compared to other ‘Mechs. 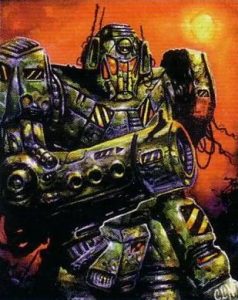 Because the Clint often found its way to the outer reaches of the Inner Sphere, it became a popular sight in the militaries of periphery nations. The Taurian Concordat had several Clints in its armed forces, and although aging, were still in decent enough condition that the Taurians created their own upgrade package in the lead-up to the Word of Blake Jihad. The CLNT-3-3T replaces the AC/5 with a light autocannon of the same caliber and upgrades its standard armor to ferro-fibrous. This allows for CASE protection of its two tons of ammo and improves the defensive capabilities of the chassis.

The CLNT-5U was a far more extensive upgrade of the 3T produced by Defiance Industries for the Lyran Alliance just before the FedCom Civil War. An endo steel chassis and light fusion engine allowed its weapons payload to be replaced by an ER large laser and a trio of ER medium lasers alongside electronics upgrades including a C3 slave unit and TAG spotting laser. Double heat sinks keep this all-energy configuration cool. Many pilots considered this variant of the Clint a better Wolfhound thanks to jump jets improving its maneuverability.

Following the fall of Hersperus II, Blakist forces began producing the CLNT-6S instead of the CLNT-5U. The jump hets and light engine were dropped for a larger 280 XL engine, allowing the Clint to sprint at 118 kph. Heavy ferro-fibrous armor further improved the Clint‘s defensive protection, and one of the ER medium lasers was upgraded to an ER large laser. A small cockpit allowed for the inclusion of an ER small laser in the head.

Several CLNT-1-2R Clint prototypes were part of Alexsandr Kerensky‘s forces that went into exile in 2784. As such, when it came time for Clan Snow Raven to begin mass production of an appropriate garrison unit, the Clint seemed a logical choice. The Clint IIC offers a rare XL engine upgrade for a Clanner overhaul, although the 10 single heatsinks are retained. A Clan-spec LB 10-X autocannon and twin ER medium lasers offer effective stopping power, while seven tons of standard armor vastly improve the Clint’s protection compared to the initial prototypes. Further, Clan technicians finally replaced the Andoran proprietary components with standardized parts, allowing the Clint IIC to be repaired in the field with minimal downtime. 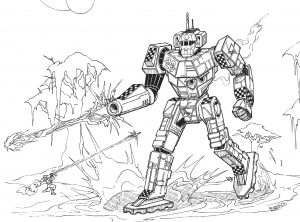 The Clint is an odd case. Even its upgraded counterparts are largely outclassed by more modern designs, and yet the Clint soldiers on. It offers little more than a body, a ‘Mech that can fulfill almost any role adequately enough to just avoid a general’s attention. Somehow, the Clint would withstand the withering scorn of engineers and technicians for centuries, kept alive by necessity more than desire.

There is at least one good lesson the Clint provides. No matter how much companies might believe otherwise, the need for interoperability and battlefield uptime will always overcome a greedy and anti-consumer philosophy that denies the customer their right to repair.