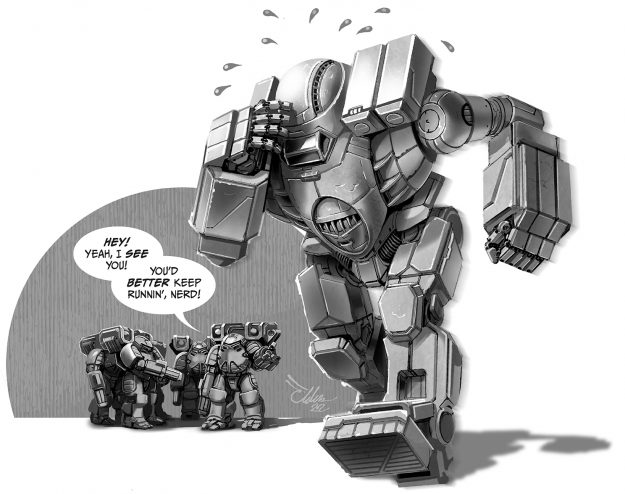 Private Ensha heard the growling tone of his Fireball’s Streak SRM launcher as it locked onto the Toad leaping from cover. Secure in the knowledge that the missile’s homing seeker would find its target no matter what the Toad did, he pulled the trigger and sent two contrails spiraling into the flying battle armor. As expected, both struck home, sending the Elemental warrior crashing back to the ground.

Only to have that same Elemental warrior almost immediately pick themselves up, dust themselves off, and raise its own SRM launcher to fire back at Ensha’s ‘Mech.

“What the fuck!” Ensha cried, half in dismay, half disbelief. He’d been told by various veterans in the Deneb Light Cavalry that Clan Elementals were tough, but even one of those missiles would have blown a hovercar to pieces. For the Clanner to survive two direct hits and then fire back was beyond unfair.

Especially considering he only really had that Streak SRM launcher to deal with the Toads. Experience had already taught Ensha that firing the machine gun on his Fireball’s right shoulder was about as effective as getting out of his ‘Mech and taking on those armored monsters with a squirt gun.

Ensha locked onto another Toad and fired a second pair of Streak SRMs. Again, both hit, knocking the Elemental flat on its back. Zooming in on his external camera, Ensha saw the Elemental’s cracked faceplate as black ooze seeped in to rapidly fill the gaps. And just like the other Toad, this one shook itself off and came after him like an angry hornet, firing its laser to score a few hits on Ensha’s chest plate.

Panic was starting to set in. Ensha looked around and saw the other Fireballs in his lance were having similar trouble downing targets. Command had said these new ‘Mechs were specifically designed to take on Clan battle armor, with Ensha’s lance formed as a fast-response unit to deal with Elemental incursions. It was starting to look like someone in AFFC procurement hadn’t done enough research to verify those claims.

When he saw his sergeant’s Fireball go down after two Elementals sawed their way through its arm, Ensha broke and ran. With a top speed of well over 180 km/h, at least his Fireball could take him away from danger faster than any ‘Mech in the Deneb Light Cavalry. 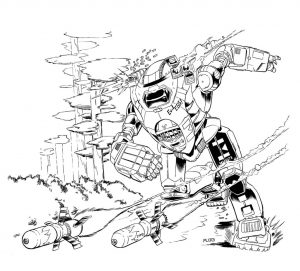 Aside from vastly superior ‘Mechs and weapon designs, the Clan Invasion also introduced the Inner Sphere to an entirely new threat: Elementals. Clan warriors bred with superhuman strength and clad in powered armor that both augmented the Elemental’s inbred power and protected the warrior through advanced life support and automatic combat medications. In the early days of the Clan Invasion, single Elementals were known to have brought down entire ‘Mechs, smashing through thin cockpit armor and killing the pilot therein.

In response, the AFFC and the New Avalon Institute Of Science began rapidly prototyping ‘Mech designs that could effectively combat armored infantry. The Fireball was specifically designed to rapidly reach areas beset by Elementals and eliminate them before they could wreak havoc. Although an abject failure in its intended role, the Fireball’s outstanding speed eventually allowed it to become an exceptional scout and forward reconnaissance ‘Mech.

The Fireball‘s defining characteristic is speed. With a running velocity of 184 km/h, the Fireball is one of the fastest ‘Mechs ever to come out of the Inner Sphere. NAIS scientists and Corean Enterprises engineers settled on four tons of standard armor as sufficient protection, and armed the Fireball with a single Streak SRM-2 and a machine gun to deal with Clan infantry.

On paper, the Fireball seemed ideal. Unfortunately, by the time NAIS received accurate reports concerning the toughness of Elementals, it was already too late to modify the design. As such, the Fireball entered production with insufficient armament to be a true threat to Elementals, let alone satisfy its mission requirement of dispatching Elementals efficiently. 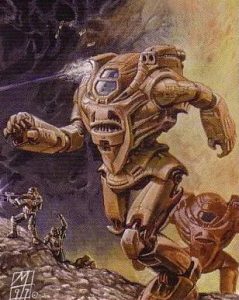 In 3053, the first production runs started delivery to the Crucis Lancers, Deneb Light Cavalry, and Ceti Hussars, all regiments guarding the Lyran side of the Federated Commonwealth from incursions by Clan Wolf and Clan Jade Falcon. All three regiments often assigned their rookie pilots to newly delivered Fireballs in order to build experience against what was perceived as easy prey.

It soon became clear that Elementals weren’t afraid of the new design. The Fireball‘s armament was found to be woefully inadequate in its first encounters with Elementals. Reports of Elementals dismissing machine gun fire and SRMs as they charged fearlessly towards quick-response Fireball lances often resulted in their pilots learning too late just how dangerous an Elemental could be.

Having utterly failed in its intended role, the Fireball was quickly repurposed as a scout and reconnaissance ‘Mech, a task to which its almost ludicrous speed was far better suited. The Fireball became a common sight in scout lances during the FedCom Civil War, where both Lyran Alliance and Allied forces made use of the design as its factory on New Avalon changed hands.

Corean Enterprises made several attempts to improve the Fireball after its disastrous initial deployment. The ALM-8D, introduced in 3054, replaced the Streak SRM-2 launcher with two medium lasers and an additional half-ton of armor. This was considered a vast improvement over the original and quickly became the new standard for regiments deployed against the Clans. The ALM-9D instead replaced the right-shoulder machine gun with a single medium laser and another half-ton of armor. This variant was more commonly given to raw recruits where the Streak SRM launcher’s targeting system would result in fewer wasted shots.

The ALM-10D, introduced in 3076, was a massive rework of the 8D variant. Adding MASC, Heavy Ferro-Fibrous armor, a targeting computer, and replacing the medium lasers with extended-range upgrades, the ALM-10D would begin production following New Avalon’s recapture from the World of Blake and remain in production into the Dark Age. 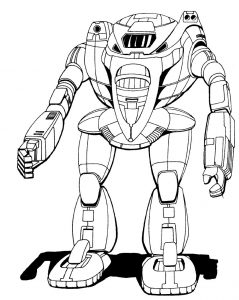 There is one other variant of the Fireball worth mentioning. Leaning into the design’s exceptional agility for illegal underground ‘Mech racing, the ALM-XF strips the Fireball down to just two ER small lasers and three tons of Ferro-Fibrous armor. The freed-up tonnage is then devoted to a massive 320 XXL engine, MASC, a Supercharger, and an XL gyro, providing the ALM-XF with a cruising speed of 240 km/h and a theoretical top speed of 400 km/h.

The Fireball offers a complicated legacy. Out-performed by newer scout ‘Mechs and designs purpose-built to deftly handle armored infantry, the Fireball‘s continuing presence can largely be attributed to Corean Enterprises maintaining Fireball production lines alongside its more famous ‘Mechs like the Centurion and Valkyrie. However, one can only assume that the Fireball will be the first production line to cease operations as soon as Corean engineers come up with a more competitive light scout.