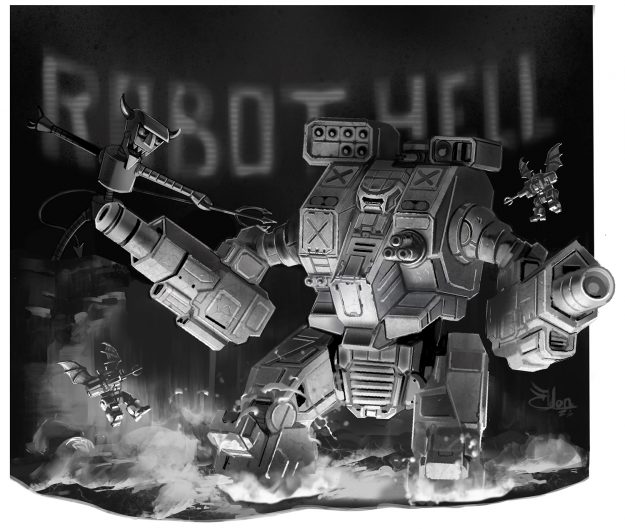 “Khan Lassenerra has directed us to create a new heavy OmniMech. And he has… ordered this BattleMech to be completed within six months.”

Each of the scientists and techs within the Hell’s Horses boardroom had different expressions after this announcement. Some looked down in solemn contemplation, a few stared back at Scientist Hyun in open-mouthed astonishment for the exceptionally short timeline. One threw his tablet on the table and lit a cigarette in direct defiance of the Star Captain’s “no smoking” ordinance.

Technician Samson picked up his jaw before whispering, “That’s… not nearly enough time.”

“Contractions, Samson,” barked Hyun. “Nevertheless, we do as the Khan commands. Ideas?”

The boardroom was met with utter silence for several uncomfortably long moments. Then, a voice from the back: “We could use the lower assembly of the new Summoner chassis?”

Hyun squinted. The voice was too far away to discern the source. Perhaps calling an all-hands meeting for a single ‘Mech design was not the wisest course of action. “And why would we do that?”

“Because you said this needed to be developed quickly,” came the sheepish reply. “Well, that is half the design right there.”

There were a few nods, and Hyun conceded the point. They needed to move fast and starting from a proven design was a boon she couldn’t deny. They needed all the help they could get.

“This limits the design’s potential capacity, but it is a start,” Hyun said. “Now, let us discuss payload.” 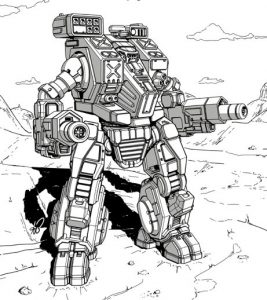 From there, the boardroom descended into utter chaos. A section of the scientists demanded anti-personnel pods and machine guns for urban combat. A contingent of techs suggested an Active Probe and ECM to counter the growing threat of electronic warfare within the clans. A scientist at the far end simply shrieked “AMS”, prompting Hyun to write the acronym on her datapad without really considering either the source or purpose of such a suggestion.

“And, let us be frank, our MechWarriors are not the best of the Clans,” Samson said during a brief lull in the brainstorming furor. “A Targeting Computer would be most helpful for our warriors.”

“Agreed,” Hyun said, adding the technology to the long list of suggested equipment. “We have yet to discuss actual weapons.”

The room once again fell silent. Then another voice from a distant corner of the packed room said what everyone was already thinking.

“Brilliant,” Hyun said with a smile. “Get this down to our engineers. We have a prototype to build.”

As the room cleared, a single scientist stayed in her chair, staring at the notes she’d taken during the manic planning session. In theory, this new ‘Mech would be able to meet the demands of any battlefield–a true OmniMech. Only she couldn’t help but think that this design was slightly unfocused. And there was the nagging feeling that they were all forgetting something vitally important…

Academics that have studied the Clans find the Hellbringer (also known as the Loki to Inner Sphere MechWarriors) to be a bit of an oddity. Its primary configuration comes with a litany of performance-enhancing equipment that most Clan MechWarriors would consider questionable, if not outright dishonorable. An anti-missile system, ECM, and anti-personnel pods provides the Hellbringer with additional defenses, while a Targeting Computer and Active Probe ensure the Hellbringer pilot can engage enemy ‘Mechs effectively in almost all circumstances. 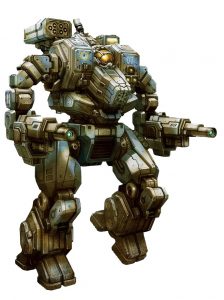 However, Clan Hell’s Horses wasn’t about to sacrifice the Hellbringer’s potential weapons capacity in order for it to mount this additional equipment. In order to ensure the Hellbringer could keep pace with similar ‘Mechs in the Clan’s touman, the ‘Mech was forced to maintain a running speed of 86.4 kph. That left armor protection as the only element engineers could scale back, leaving the Hellbringer with an abnormally light shell of just eight tons of standard armor.

Hells Horses’ engineers were also perhaps too focused on the Hellbringer’s speedy development to remember that its mostly energy-based weapons would need to be offset by heatsinking capacity. The Hellbringer‘s 13 double heat sinks allow it to shrug off some of the heat generated by its twin ER PPCs, but not all, and it’s certainly not enough to cool the ‘Mech down if the pilot starts firing its trio of ER medium lasers.

Despite these flaws, the Hellbringer would go on to become a popular ‘Mech, especially with Clan Jade Falcon MechWarriors. First introduced in 2926, the Hellbringer was disseminated to most Clans thanks to Hell’s Horses leadership gifting the design for political favors. By the time of the Inner Sphere invasion, it was a common enough sight amongst the invading Clans to be designated Loki by Captain Galen Cox for its “utterly mad” configuration.

While the primary configuration of the Hellbringer maintained a mostly energy-based weapons payload, alternate configurations lean more heavily towards ammo-dependent armaments. The A configuration retains the Active Probe and machine guns but swaps the SRM launcher and ER PPCs for twin ER large lasers, an Ultra AC/5, and an LRM-20. The ECM, Targeting Computer, and anti-personnel pods were swapped for a NARC Missile Beacon for improved accuracy of nearby fire-support units–another strange addition for a society that values honorable single combat.

Newer configurations of the Hellbringer tend to eschew the specialist equipment to devote more of its 28 tons of pod space to weapons. Interestingly, the Hellbringer‘s dissemination also included Inner Sphere armies, with the G configuration sporting an Inner Sphere-built Improved Heavy Gauss Rifle. By the Dark Age era, Clan Sea Fox readily provided the aging Hellbringer to any customer willing to pay for it. 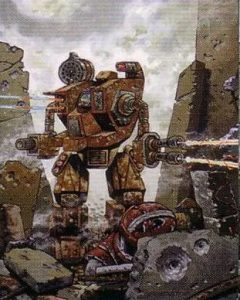 Amongst the Home Clans, however, the Hellbringer has largely been replaced by the Ebon Jaguar, a superior design that offers similar speed and firepower with far greater armor protection while maintaining a 65-ton gross weight. In 3121, the Jade Falcons attempted to improve their favored design with the Loki Mk II. Also known as the Hel, the Loki Mk II drops the Hellbringer‘s engine to a 260XL (resulting in a running speed of 64 kph) to devote even more of its pod space to weapons. The primary Loki Mk II configuration mounts twin Gauss Rifles alongside twin ER Large Lasers with a Streak SRM-4 for lighter targets. The Hel’s B configuration is even more powerful thanks to a Long Tom artillery cannon mounted in the right arm. Ferro-Fibrous armor improves the Hel‘s protection over its progenitor, but it still remains a relatively fragile heavy ‘Mech.

The Hellbringer marks a logical extreme for Clan designs emphasizing offense and mobility over defense. While the Hellbringer‘s primary configuration offers its pilots a curious array of equipment, most would likely be better served by a few more armor plates. Today, Hellbringers are the preferred mount for elderly Clan ‘MechWarriors looking to die in a blaze of glory or younger warriors too foolish to consider their own mortality.