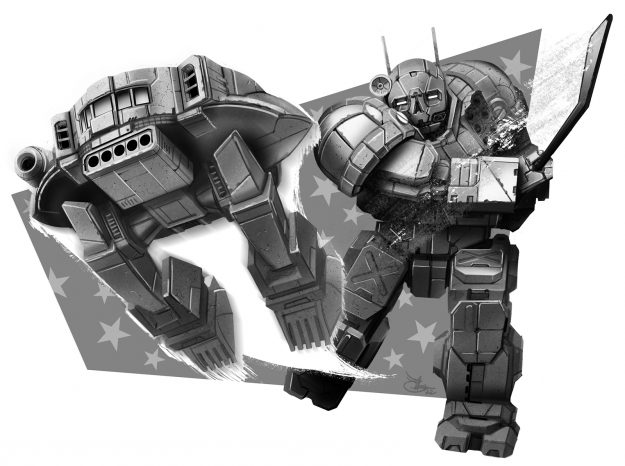 “This thing is the coolest ‘Mech you’ll ever drop feet-first into a firefight.”

The claim sounded dubious even as the ‘Mech salesman attempted to accentuate the point with several slaps to the Hoplite‘s shin armor. Lieutenant Brooke Casia, executive officer of the Crimson Tigers mercenary company, was in the market after having her Centurion shot out from under her during her last contract. The squat ‘Mech certainly didn’t appear “cool” by her standards, looking more like a cleaning drone that had grown legs and an autocannon.

“The air-conditioning!” Another set of slaps once rang off the Hoplite‘s hull while the salesman laughed at his own pun. “Plus, this ‘Mech has sixteen whole heat sinks. You could fire everything this bad boy has while running full-tilt through a desert and you’ll be cool as a cucumber inside the cockpit.”

This was enough for Casia to raise an eyebrow at least. She’d never enjoyed the sauna-like temperatures that ‘Mech combat frequently produced. A ‘Mech that couldn’t overheat would be an asset. 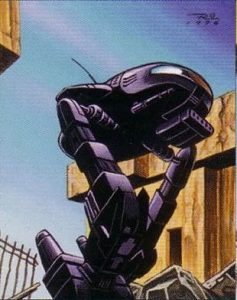 But there’s always a catch, Casia thought. “I can see an autocannon port here,” she pointed at the Hoplite‘s right arm, “and five missile ports here,” she pointed again at the launcher jutting from beneath the ‘Mechs cockpit. “This thing got anything else in terms of firepower?”

The question seemed to finally reign in the ‘Mech salesman’s enthusiasm. “What you see is what you get,” he said. Casia noted this statement was made without a single slap.

“So that’d be, what, a 10-class autocannon and an LRM-5 launcher? Not exactly standing up to my old Centurion. Does it go faster at least?”

Now the salesman seemed utterly crestfallen. “Same running speed as the Centurion. And before you ask, no, it doesn’t have any jump jets either.”

Casia blinked. “Alright, so what does it have over a Centurion?”

“About three tons of armor. That’s it.”

“So you’re saying I lose half my firepower, a battle fist, and the ability to shoot upward without tilting the whole damned ‘Mech for just three tons of armor?” Casia ended the question with a slap to the Hoplite‘s other shin. It seemed far more intimidating than encouraging coming from her.

The ‘Mech salesman winced as though physically struck. He could already tell that this sale was as good as gone. “Ah, well, we do have other ‘Mechs’ in our garage…”

While later Star League ‘Mechs often pushed boundaries in search of a technological edge, the Hoplite was born in the League’s early years, well before the rise of the massive industrial complex that would produce such unnecessary machines as the Charger and the Assassin. The Hoplite was designed and built to fulfill a specific military requirement for the least possible expense. As such, the Hoplite is a simple, rugged, and dependable ‘Mech that achieves its objective and little else. 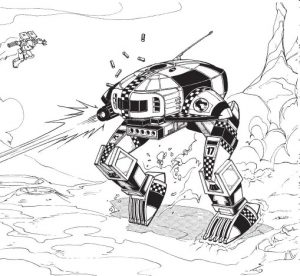 Introduced by Martinson Armaments in the year 2758, the Hoplite is an infantry support ‘Mech. The HOP-4D comes armed with a dual-purpose LB 10-X Autocannon and a five-rack LRM launcher. The autocannon is effective against almost all targets, able to fire single slug rounds at armored targets and scatter-shot against infantry and light-armored vehicles. The LRM-5 launcher offers infantry with long-range suppressive fire and counter-battery fire on a mobile chassis. The Hoplite is durable, with an impressive eleven and a half tons of armor that allow it to withstand withering fire in order to protect Star League infantry, but its ability to combat enemy ‘Mechs is somewhat lacking.

Although the LB 10-X is a reliable weapon, its limited ammunition and lack of secondary weapons make it vulnerable should the autocannon become disabled. The LRM-5 launcher is sufficient to support infantry, but most ‘Mechs will find it a minor nuisance at worst. The Hoplite can take serious punishment, but its inability to return that punishment ultimately makes it vulnerable in the modern battlefield.

Back in its heyday, however, the Hoplite was a popular machine. Part of that was due to the simplicity of the design: without arms, pilots didn’t have to learn how to control upper limbs, and with a curiously high number of heatsinks–16, in fact–pilots also didn’t have to worry about heat build-up. The Hoplite could fire all of its weapons until its ammo bins ran dry while running over a volcanically active mudflat and never have to worry about spiking its heat gauge. Combined with its massive armor and simple weapons loadout, Star League MechWarriors often considered Hoplite pilots just a step above tankers.

Star League generals, however, loved the Hoplite. It was a cheap, no-nonsense machine that was ideal for bolstering forces and filling out billet slots. The SLDF eventually came to possess thousands of the dependable machines, and many examples could be found in Alexander Kerensky‘s forces prior to their flight from the Inner Sphere. In fact, the design was so common during the Star League era that Wolf’s Dragoons thought it would be an innocuous design that wouldn’t arouse suspicion during its mission to spy on the Great Houses. Little did they know that the Hoplite had actually died out during the Succession Wars precisely because of its popularity with military leaders. 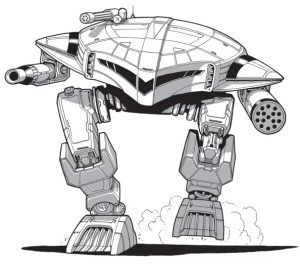 The only notable variant was the HOP-4B, which replaced the AC/10 with a PPC and upgraded the LRM-5 to an LRM-15. This gave the ‘Mech better long-range engagement and improved firepower. A Star League “Royal” variant of the HOP-4B was also produced, adding Artemis IV tracing to the LRM launcher, Guardian ECM, CASE, double heat sinks, and an anti-missile system.

The Hoplite would once again become a dying breed after Wolf’s Dragoons cut ties with the Clan Homeworlds in 3020. By the Jihad era, the Hoplite was again facing extinction, both due to a lack of factories creating replacement parts and due to the fact the Hoplite had long been outclassed by more contemporary designs. Even during the Star League era, ‘Mechs like the Griffin, Shadow Hawk, and Wolverine offered similar firepower with far greater mobility, and most skilled generals knew that mobility was the key to winning conflicts.