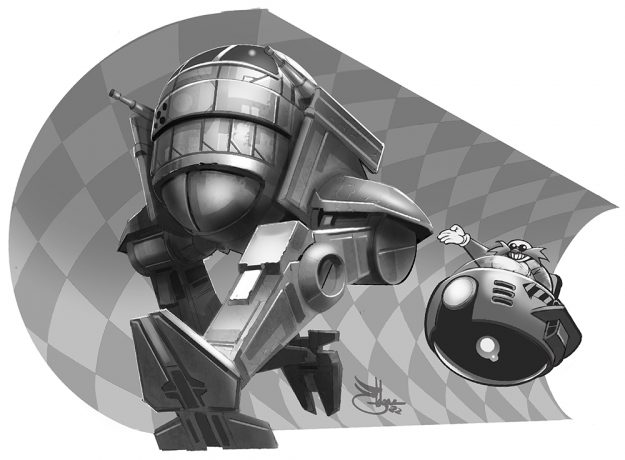 “It looks like an egg,” griped corporal Sumners sullenly.

Lieutenant Garcia sighed. Losses had been heavy on Misery, and Sumners busted up Stinger had been replaced by an HNT-151 Hornet. She knew it wasn’t exactly an upgrade, but she hadn’t expected Sumners to be quite so morose about the assignment.

“It looks like an escape pod that grew legs,” Sumners said when Garcia failed to respond.

Garcia sighed again. “Your complaint has been noted, corporal.”

“It looks like an angry peanut that’s trying to steal barrels of other peanuts so nobody can eat any peanuts.”

“Sumners, I understand you had a rich and storied history with that Stinger, but you’re a soldier in Wolf’s Dragoons and you’ll pilot whatever the quartermaster damned well provides. Are we clear?”

This minor dressing down did nothing to improve Sumners’ mood. “Yes ma’am.”

“Good. We need everyone out there to meet the Third Ryuken regiment, and that includes you in your shiny new peanut-klepto metal egg.”

This managed to get a wry smirk from Sumners, who finally picked his head out of his hands, saluted, and trotted away from Garcia and off to the small ladder that would lead him to the Hornet’s cockpit. Now that she was looking at it, Garcia thought the Hornet really did look like an angry egg. 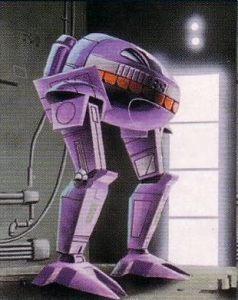 Following the success of the Crusader, which had gone on to become a workhorse of the SLDF, Kallon Industries started eyeing more niche defense manufacturing contracts. One of those was for an urban scout ‘Mech, a role that was becoming increasingly important in the fighting on Periphery worlds. However, Kallon’s proposal was a design that even on paper seemed ill-suited for the role. At 20 tons, with a top speed of 86 kph and armed with a single LRM-5 launcher and a medium laser, the Hornet was at best a light support unit masquerading as an urban scout. With little interest from SLDF procurement for a ‘Mech that didn’t even meet the most basic of requirements for urban combat, the initial HNT-171 Hornet variant was shelved for over two centuries.

As the Succession Wars finally began to ebb, Kallon Industries rediscovered the Hornet blueprints in the ruins of an ancient factory and decided to put the design back into production. Unfortunately, much of the advanced technologies used in the HNT-171 were no longer available, such as the Endo Steel chassis, Ferro-Fibrous armor, and anti-missile system. The downgraded HNT-151 Hornet was introduced in 2990 and sold on the open export market where it was advertised to mercenary units as a light support ‘Mech.

One of the initial buyers was Wolf’s Dragoons, which purchased a significant portion of all Hornets ever produced. There the Hornet served with distinction during the Battle of Misery, although the Hornet‘s success is perhaps best attributed to the battle acumen of Wolf’s Dragoons officers and MechWarriors than the ‘Mech itself. That said, the Hornet briefly became a favorite with the Federated Suns where it replaced ancient Stingers, Locusts, and Wasps with March Militia units. The Ceti Hussars and the Deneb Light Cavalry also equipped themselves with Hornets, but by the time of the second Star League and the FedCom Civil War, the Hornet had long been surpassed by superior designs in every role. 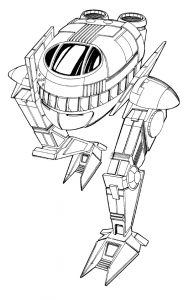 Besides an almost ludicrous design that provides very little protection for the pilot, the MechWarrior suffers from the typical flaws of a light ‘Mech that sacrifices speed for a meager increase in armor and firepower. Although the extra armor allows it to withstand strikes from similarly light ‘Mechs such as the Locust or Stinger, and its LRM-5 launcher allows it to engage at distances typically reserved for much larger units, the Hornet lacks the speed to disengage when it’s confronted with a superior force. Jump jets only partially solve this issue, and commanders fielding Hornets were encouraged to use terrain wisely in order to provide a secure line of retreat for Hornet pilots. Note that this tactic didn’t save those Hornet pilots if the enemy force also had jump-capable ‘Mechs.

In an urban environment, the Hornet was at a strict disadvantage as it loses the benefit of the LRM-5’s longer range. An anti-missile system provides some additional protection from shoulder-fired missile launchers, but the closed-off spaces sometimes didn’t provide enough time for the anti-missile system to react to new threats.

The Hornet was better employed as light support to heavier fire support ‘Mechs where it could add its long-range fire to whatever target the primary units were engaging while simultaneously defending them from return fire using their anti-missile systems. Jump jets and a medium laser provided some defense against armored infantry, but the Hornet‘s lack of arms made defending against Elementals difficult.

The Hornet did make a comeback in the later years of The Republic with the HNT-181 variant produced by Coalition Armory Inc. under license. Upgraded with an XL engine, Compact Heat Sinks, an MML-5, and a Small Re-Engineered Laser, the HNT-181 Hornet provided additional versatility without sacrificing performance, although the performance of the Hornet already left much to be desired. This cheap but modernized design was perfect for periphery militias to protect against bandits and pirates but failed to stand up against more threatening designs. 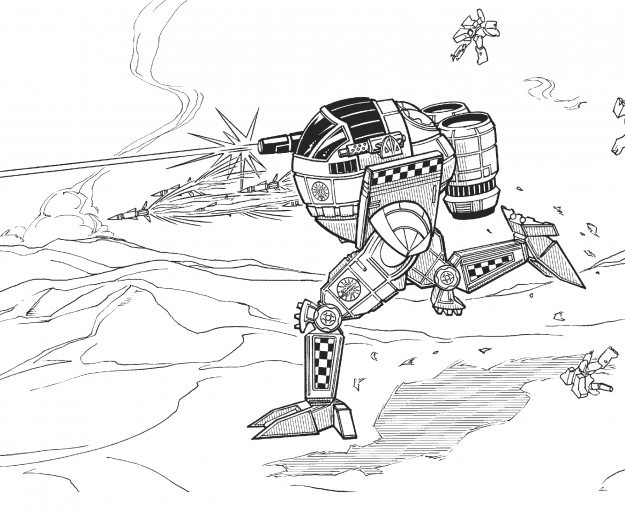 And finally, there’s the issue of the Hornet’s looks which were comical even for ancient Star League designs. I mean, just look at the thing. It looks like a soybean cosplaying as The Rocketeer.

As always, leave a comment with your opinion of the Hornet below along with your suggestion for the next Bad ‘Mech.