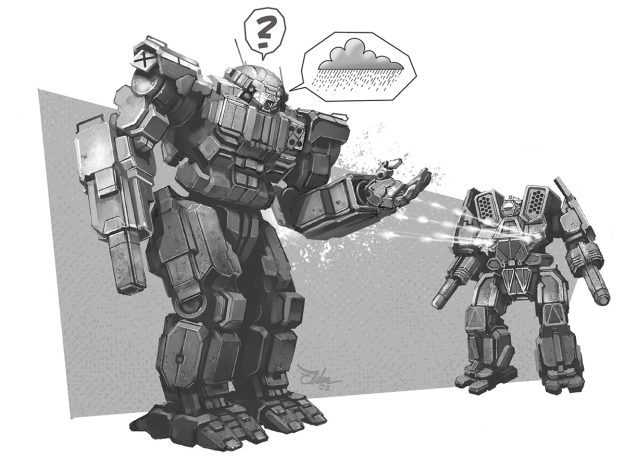 “Patterson, on your right!” Hauptmann Tomas Jager called out on the wide band. “Drac Mauler!

“It is a Daboku, Lyran swine, not a Mauler!”

That wasn’t Patterson’s annoyingly nasal voice. Patterson’s Centurion had taken a hit to its armored dome early in the fighting between the 14th Donegal Guards and the 7th Sword of Light regiment, which was currently defending the planet Utrecht with armored and infantry support. This forced Jager’s company to switch to the open-band comms in order for Patterson to receive orders at the same time as everyone else in the unit.

Unfortunately, this also meant that any Drac that turned the dial on their radio could listen in on Jager’s comms. And this particular Drac apparently spoke German.

“This is Chu-i Tatoro Yagami of the 7th Sword of Light,” came the terse reply. “This planet will be your tomb. Face me in honorable combat!”

Crap, thought Jager, another holo-samurai wannabe. He’d never heard of the name “Daboku” though. The Lyran Armed Forces had taken to calling the new Drac assault ‘Mech the Mauler for its ability to absolutely maul an opponent from long range. If Jager was going to duel this guy, he’d definitely want to close the distance quickly.

Patterson’s already damaged Centurion didn’t have the armor left to stand up to the Mauler/Daboku. A flight of LRMs slammed into the medium ‘Mech, tearing through what protection remained on its right shoulder before sending the Centurion’s arm-mounted autocannon tumbling to the rocky ground.

“Get clear, Patterson,” Jager called out. “I’ll take this joker.”

“The joke will be on you, Hauptmann! Face me!”

Jager kicked his Zeus into a run. The Chu-i’s Daboku was already turning to star throwing long-range weapons fire at him, starting with a hail of light autocannon fire. The rounds pinged off his Zeus like armor-piercing rain, but then inexplicably fell silent.

Jager had heard reports that the new Mauler might have been rushed into service courtesy of the Lyran offensive into the Draconis Combine. An unproven design that had skipped its shakedown tests for a trial by fire on the battlefield. Looks like the Drac engineers still hadn’t figured out how to keep those autocannons from jamming.

Painting the Mauler with his fire control radar, Jager sent a flight of 15 missiles into the Drac ‘Mech followed by a burst of his own autocannon. The LRMs wreathed the Mauler in fire before Jager’s cannon rounds slammed dead center of mass. The Drac assault machine rocked back on its heels but didn’t drop.

“I will not be defeated so easily,” Yagami taunted, lifting both barrel-shaped arms and aiming them squarely at Jager’s charging machine. One large laser missed wide, while the other connected the two ‘Mechs in glowing light. However, Jager noted that the intense beam didn’t seem to cut into his Zeus’s armor more than it did just boil the paint on his unit insignia. Make that a failed laser-focusing array along with jamming ammo feeds.

“Ksa! Bakayarou!” Combined with the alarms sounding in the background, it sounded to Jager like the Chu-i was struggling with his ride.

At 200 meters, the Hauptmann let loose with his entire weapons complement. Both medium lasers stabbed into the Mauler‘s heart, while his large laser struck it on the left torso. His AC/5 took the Mauler in the left shoulder, while the LRM-15 peppered the assault ‘Mech with tiny explosions from head to toe.

“I will destroy–” And then the radio went dead. Jager checked his sensors and noted that despite the thrashing it had just received, the Mauler’s armor was still intact. The ‘Mech had just shut down.

Jager slowed his Zeus to a trot as it closed to within a few meters of the Drac machine. Then he brought his ‘Mechs cockpit in close enough to peer straight through the two ferroglass layers that kept Chu-i Yagami and himself separate. Jager could see the Chu-i desperately bashing on his ‘Mechs console but to no avail.

In a maneuver that would later be recounted as the ‘Jager Bomb,’ Hauptmann Jager carefully placed his Zeus’s right arm against the Daboku/Mauler’s chest and gave a gentle push. The Donegal Guards MechWarrior had just enough time to see the look of utter terror and confusion on Yagami’s face before his ‘Mech toppled over backward, sliding downhill for several meters before finally stopping when it struck a large boulder. 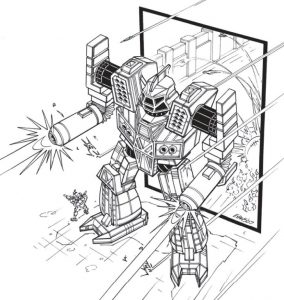 The Mauler started life as perhaps the most colossal failure of any ‘Mech produced by Luthien Armor Works for the DCMS. It was so bad that the design actually needed to be renamed before Draconis Combine soldiers would agree to pilot the 90-ton fire-support ‘Mech. Quite perversely, the Mauler would eventually be designated with the reporting name given to it by FedCom forces during the Fourth Succession War.

The Mauler began as the Daboku, an assault ‘Mech designed to use a new (or rather, old) type of ammunition storage equipment that was rediscovered in the Helm Memory Core. Having been conceived as a long-range fire support ‘Mech that could put out withering fusillades of missile and autocannon fire, the Daboku‘s heavy reliance on ammunition was seen as a vulnerability that could be mitigated–at least in terms of a potential hazard to the pilot–through the use of Cellular Ammunition Storage Equipment, better known during the Star League as CASE.

However, the Daboku was rushed into service at the outbreak of the Fourth Succession War before Luthien Armor Works could perform proper shakedown tests. As a result, the CASE system proved to be absolutely disastrous in actual combat. If the Daboku was struck dead-center on the torso with enough force, it would incorrectly trigger the CASE system to detect an uncontained ammunition explosion, causing the auto-ejection system to catapult the pilot out of what was otherwise a still-functional ‘Mech. 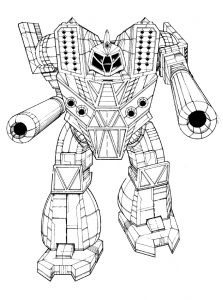 Functional is perhaps too strong a word for the Daboku. Even before it was thoroughly examined, the Daboku had earned a reputation among DCMS MechWarriors for being a virtual death trap, but post-combat inspection by DCMS engineers found almost every major system of the ‘Mech to be flawed. Its large lasers were prone to rapid inexplicable heat spikes, its ammunition feeds constantly jammed, and its LRM fire control computers would often lose lock at the worst possible moment.

Publically, Luthien Armor Works apologized to the Coordinator for the new assault ‘Mechs teething issues, but rumors swirled internally that several designers were fired for trusting too much in a Capellan prototype that served as a basis for the Daboku. Those rumors were never confirmed, however, and those that remained on the Daboku‘s design team went back to the drawing board with more data from the Helm Memory Core to assist them.

What they returned with almost a decade later was designated the MAL-1R Mauler, ironically choosing the reporting name FedCom soldiers had used for the Daboku during the war. The Mauler was a completely different animal compared to the Daboku using absolute cutting-edge technology for 3048. ER large lasers provided additional range compared to their standard counterparts, while 11 double heat sinks keep the ‘Mech far cooler. Ferro-fibrous armor provided the equivalent of over 12 tons of armor protection for just 11.5 tons of spent weight, and an XL engine freed up enough tonnage to upgrade the Daboku‘s twin LRM-10 launchers to LRM-15s. Best of all, the CASE system’s auto-ejection issue had been entirely corrected, allowing DCMS MechWarriors to continue to fight under heavy fire. 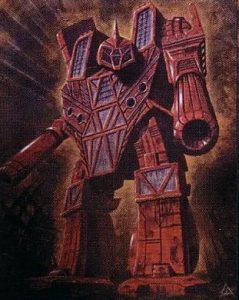 Even with a high-tech upgrade, the Mauler still suffered from some shortcomings. Its quartet of AC/2s had just two tons of ammunition supporting them, which often required reloads mid-battle. The Mauler is also a cumbersome beast with a top speed of 54 kph, making it unsuitable for running battles. Finally, the XL engine and relatively light armor make it vulnerable in a protracted firefight. The Mauler is best used in its intended role–as a long-range fire-support ‘Mech near protected supply lines.

Several variants attempted to revamp the Mauler for other roles. The MAL-1K, for example, swapped the ER Large Lasers for Snub-Nose PPCs and the autocannon/2s for light autocannon5/s. This changed the Mauler into a multi-role brawler, although it still suffered from relatively light armor protection for a 90-ton assault ‘Mech.

The MAL-2R attempts to alleviate some of the Mauler‘s vulnerabilities by ditching the XL engine in favor of a heavier standard one. This necessitated reducing the Mauler‘s LRM-15s down to LRM-10s and replacing the large lasers with paired ER medium lasers. The AC/2s are replaced with Ultra versions, doubling their rate of fire but also exacerbating the Mauler‘s ammunition problems. 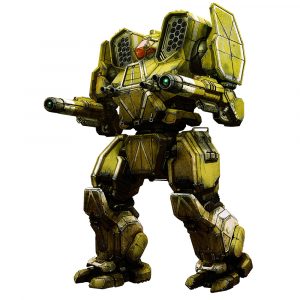 With the advent of C3 technology by the Draconis Combine, the MAL-3R fits a C3 slave unit while replacing its large lasers and AC/2s with twin LB-X Autocannon/10s and a small laser. Three jump jets provide some flexibility in terms of positioning to better allow its pilot to take advantage of data provided by the C3 unit.

The Mauler would go on to become a popular design for the DCMS during the Clan Invasion and into the Jihad, but production would cease after the destruction of Luthien Armor Works production lines by the Word of Blake. By the 32nd century, the Mauler had largely been replaced in the Combine’s armed forces, but surviving examples can still be seen throughout Combine space and sometimes even beyond.