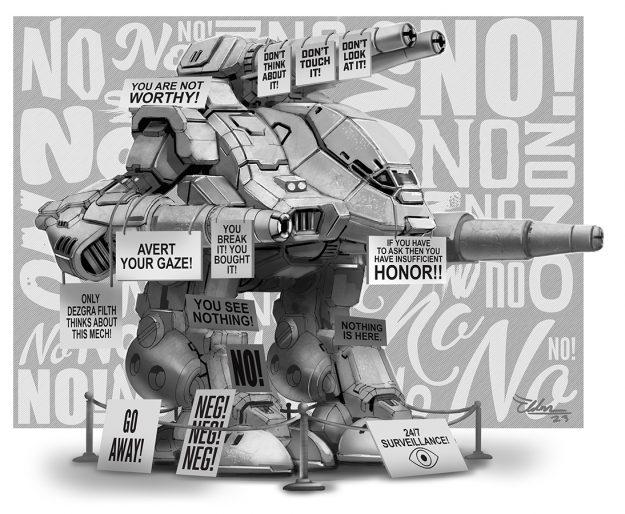 “We require reinforcement, Star Captain! The Falcons are about to breach our perimeter!”

Star Captain Jolin Demos considered her options. Her Jade Falcon opponent in this trial had come at her swiftly, as expected, but she hadn’t expected her Elementals to be completely overrun. Now without infantry support, her lighter elements were being picked apart by highly accurate fire from quick-moving but well-armed Falcon heavy ‘Mechs.

Even in her dire situation, the choice was obvious. “Hold your ground, Star Commander.”

There was a moment of static, then: “Neg, Star Captain, we are in danger of being routed. I respectfully request reinforcement.” The transmission was nearly cut off by the sound of an explosion near Star Commander Jonathan’s Fire Scorpion.

“You have your orders, Star Commander,” Demos repeated with a voice like cold steel. “Hold.”

For a moment, Star Captain Demos felt uneasy about ordering her MechWarriors to hold without support. Her heaviest elements still remained in Alpha Star, including her own prized Stone Rhino. Its awesome firepower was the stuff of legend amongst the Clans and would surely have made short work of the invading Falcons.

But to put such a historic treasure in harm’s way… Such recklessness would certainly draw the ire of the Great Father’s spirit. And besides, her necrosia-fueled vision from several nights before assured her that victory could only come through patience.

A Falcon Kit Fox briefly appeared on her Stone Rhino‘s targeting computer–a quirk of her oddly perceptive and ancient machine to read such a small ‘Mech from such a great distance. Almost as though it were begging to be unleashed. Her Gauss Rifles could theoretically hit the 30-ton ‘Mech even at such a great distance, but Demos continue to hold her fire.

Another burst of static preceded a broadcast on her trinary’s comm line. “This is MechWarrior Colm. Star Commander Jonathan is down. We have but three operational ‘Mechs remaining. Requesting assistance.”

The Kit Fox blinked off Demos’s heads-up display, and she felt her Stone Rhino’s shoulders slump without her ever issuing such a command. Almost as though the machine itself was disappointed in her inaction.

“MechWarrior Colm, you will hold.”

Colm’s response was only static. 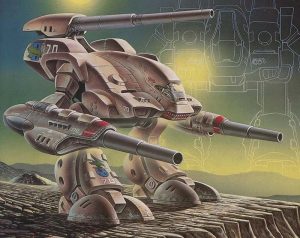 The Stone Rhino, better known as the Behemoth to Inner Sphere forces, comes from strange beginnings. Originally modeled after the Matar, itself colloquially referred to as “Amaris’ Folly,” the Stone Rhino represents the epitome of Clan hubris. It’s also a ‘Mech that has historically been highly prized among the Clans, both for its historical significance and for its exceptional firepower, two properties that often made commanders reluctant to utilize the Stone Rhino‘s awesome power.

Originally a super-heavy design, the Matar was created in 2775 during the waning years of the short-lived Amaris Empire. Besieged by SLDF forces, growing desperation led Stefan Amaris to demand ever more expensive and elaborate wonder weapons, resulting in a 110-ton ‘Mech that was too heavy to move without shattering its leg actuators. Possessing a theoretical top speed of 32 kph, the Matar did have incredible firepower for the era, with two Large Pulse Lasers, two Gauss Rifles, one ER Large Laser, two Medium Pulse Lasers, and two Flamers.

When Terra fell, Aleksandr Kerensky captured the Matar’s project lead, Rifkin Amaris, a cousin of the usurper Stefan Amaris. This led to the SLDF obtaining the Matar’s blueprints which they brought with them during Operation Exodus. Over 70 years later, Clan engineers would take those blueprints and attempt to perfect the design, creating a formidable assault ‘Mech. 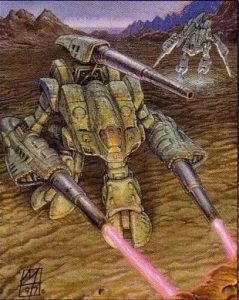 The Stone Rhino was introduced in 2847 by Clan Smoke Jaguar scientists eager to prove their superiority of the Clan way to anything even remotely related to the Inner Sphere. Named after an equally formidable beast on the planet Eden, the Stone Rhino came armed with the same twin Gauss Rifle and Large Pulse Laser combo as the Matar but removed the remaining weaponry in favor of a single Small Pulse Laser. Despite removing numerous weapon systems, advanced Clan tech meant that the Stone Rhino still offered similar firepower. Better yet, the machine weighed 100 tons and was capable of actually moving at 54 kph. Three jump jets enhanced the Stone Rhino‘s mobility, while unique shock-absorbing cowls on each arm allowed them to be used as battering rams in keeping with the Stone Rhino‘s namesake.

Due to its size and expense, the cost-averse Clans only ever produced the Stone Rhino in very small numbers–most of them initially in the Smoke Jaguar Touman, but the Stone Rhino‘s popularity soon saw scattered examples in most Clans. With so few examples of these ancient, battle-worn machines, each Stone Rhino is unique, offering curious eccentricities both to their pilots and to the technicians that service them.

The Stone Rhino‘s notoriety has in practice led to problems utilizing the ‘Mech’s power. Once spotted on the battlefield, opposing forces would often challenge Stone Rhino MechWarriors to Trials of Possession for their ‘Mechs. Even if the Stone Rhino pilot evaded such trials, the ‘Mech was still a high-value target that smart tacticians would eliminate quickly lest their forces are picked apart by the Stone Rhino’s twin Gauss Rifles. Not wanting to sacrifice these limited and valuable machines, allied commanders could be hesitant to commit Stone Rhinos to the crucible of combat–a psychological phenomenon that dates back to the Battle of Jutland on ancient Terra. Even during the heaviest fighting of the Clan Invasion, Stone Rhinos were a rare sight and often relegated to secondary garrison clusters. 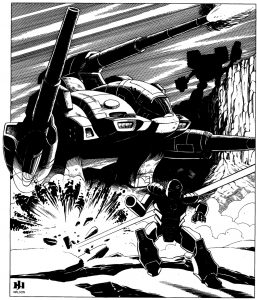 Soon after the Stone Rhino 2‘s initial production run, Clan Hell’s Horses captured the Scorpion’s holdings on Tokasha and began making their own variants of the Stone Rhino. The Stone Rhino 3 finally ditched the ‘Mech’s signature Gauss Rifles in favor of twin ATM-9s and enough heat sinks and ammo to use them until its ammo bins ran dry. Production was briefly interrupted when the Hell’s Horses were ejected from the Clan Homeworlds in the early 3070s, the Horses set up a new production line on Csesztreg that produced several more Stone Rhino variants, culminating in the Stone Rhino 8 which drops the original’s jump jets for an Actuator Enhancement System in each arm. 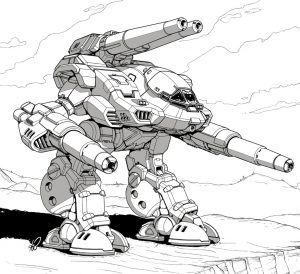 Although still powerful in the modern era, the venerable design would eventually be overshadowed by the Clan Wolf Crucible, which mounts a whopping four Gauss Rifles capable of eliminating smaller ‘Mechs in a single salvo. Perhaps taking the Matar too far, the Word of Blake Omega also surpassed the Stone Rhino. At 150 tons and mounting three Gauss Rifles and twin LB 10-X Autocannons, the Omega was a far more effective superheavy design that saw the heaviest fighting in the final hours of the World of Blake Jihad–just as the Matar did in another battle for Terra so many centuries earlier.

Today’s Stone Rhinos have been outclassed by more modern 100-ton designs and ‘Mech commanders have since learned to commit these fearsome machines to the desperate fighting of the IlClan era. Still, certain Clans revere the Stone Rhino enough to only use them in the direst of circumstances–even to their Clan’s detriment.