The BattleTech universe has a rich history, full of lore. Developed not only by the sourcebooks and supplements for the game, the story of BattleTech has played out in novels for well over twenty years.

Today, many years after the last novel to be published has disappeared from book store shelves, authors continue to grow, shape, and expand the BattleTech universe through BattleCorps. Dedicated to expanding the body of literature available to fans, BattleCorps has been publishing short stories, compilation volumes, and even a few full-length novels since 2002.

We recently caught up with BattleCorps author Jennifer Brozek and were able to ask her some questions about her writing, her BattleTech story, and her experience as a fan of BattleTech and MechWarrior.

Dave: What was your first experience with the BattleTech universe?

JB: It was years ago when I discovered one of the BattleTech novels. I don’t remember which one now because I was such a voracious reader at the time. I remember loving the big stompy robots. They reminded me so much of Robotech—a cartoon I was a big fan of.

Dave: What is your favorite BattleTech era? What intrigues you about this era over the others?

JB: It’s the Jihad era and the years just before the Jihad Wars. The Word of Blake Jihad was two centuries in the making and, right there at the end, just before all hell breaks loose, is where I live. Mostly because I’m a big fan of transitions. I like going from one state of being to another. I think the tipping point for the Jihad Wars is a fun place to play.

Dave: With all of the various factions and places in the Inner Sphere and the Clans, where do you consider your home to be in the 31st century?

JB: I really am a fan of the Free Worlds League. It’s why they’re the good guys in my BattleTech webseries, The Nellus Academy Incident. I would choose to be part of House Marik.

Dave: What is your favorite BattleTech story or novel?

JB: I don’t have one. BattleTech has been a casual hobby and not an obsession like it really needs to be to understand the scope of the universe. I mean, it’s been around for 27 years. And in development for most of that time. That’s a lot of crunchy facts to remember.

Dave: You are writing a short story series that is still being released on BattleCorps. What got you interested in writing BattleTech fiction, and how did you come across the idea for your series?

JB: I did not have a desire to write BattleTech fiction. It’s pretty intimidating—all that history, all those crunchy tech facts, and those nitpicky, rabid fans. However, after I won an ENnie, my editor, Jason Schmetzer, wooed me for about a year to come write for him. I didn’t agree until I knew what story I wanted to tell. And that is the story of dependents in the military.

I grew up as a military brat. I understand the military culture that so many civilians just don’t get. I wanted to tell their story. Military kids have to grow up fast. I also wanted to tell a BattleTech story that didn’t involve Mechs. There’s so much more out there than big stompy robots that are just as important. Every job in the military has its place. Of course, as those reading along in the series will discover, I do write about Mechs in the end.

Dave: What have you learned about BattleTech since you started writing fiction for the universe?

JB: There’s too much to tell tech-wise. I have a BattleTech think tank group who vets my writing before I turn it in. Then, the official Cat Lab fact checkers point out where I get the tech wrong. But, for the most part, I’ve discovered a desire for the more intimate stories in the BattleTech universe. More people want to know about the closer stories rather than just be big battles. Also, as my series is YA (young adult), tons of fans have thanked me for bringing in a new perspective to an old IP. Most people don’t get the military lifestyle for kids. It interests them.

Dave: Do you play MechWarrior Online? If so, what has your experience been with the game and players? If not, would you be interested in trying it out?

JB: I don’t play Mechwarrior Online. Because I’m a writer, I don’t play any MMOs—even though I want to. I have to write. There’s something about playing an MMO that scratches that writing itch. So, I don’t play. Unless I don’t have a contract. Which is never. J Though, I do listen to the “No shit, there I was stories…” with interest.

Dave: Thank you for taking the time to tell us about yourself and experiences. Do you have any final words for BattleTech and MechWarrior fans?

JB: Thank you for reading what we write. Authors really do appreciate it. If you want to hear more from a specific author, let Cat Labs know. And when new fiction comes out, talk about it, share it. The more there is an audience, the more we get to write for you. But if you want BattleTech novels, speak up and be heard.

Several months have passed between now and the time that we initially corresponded with Jennifer, and 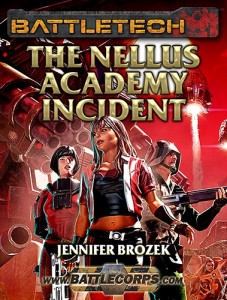 shortly before the publishing of this interview, her Nellus Academy Incident series was released in a single volume. We asked Jennifer if she would like to add anything to the interview, and this is what she said:

Dave: It’s been a few months since we last corresponded, and in that time The Nellus Academy Incident has been published as a single volume novel. Does this “up the game” from just publishing on BattleCorps, and is it a portent of possible future works from you set in the BattleTech universe?

JB: I don’t know what the future holds for me and BattleTech, but there is a good possibility of more fiction from me. I even know what the next story is in the series. Though, I think I would write it a little bit different though. Perhaps 12 episodes of about 5000 words each instead of 25 episodes of 2000-3000 words each. I’m not sure. It all depends on contracts and my availability. However, I do know there’s new fiction on BattleCorps.com every single month for those who need their fiction now.

You can catch up on Jennifer’s story, “The Nellus Academy Incident,” and hundreds of other BattleTech stories by visiting BattleCorps and signing up for their fiction subscription. You can also use the BattleShop to buy short stories individually if you do not wish to subscribe.