BattleTech is a game and a universe that is driven by its lore. Many of us who love the game and its stories have a deep connection because of the novels and story-rich sourcebooks and supplements that have been published over the years.

While it’s been a few years since any of us have seen BattleTech or MechWarrior novels on a book store shelf, BattleCorps has continued the effort to provide us with the best in a continually growing lexicon of official BattleTech lore, continuing the work that the dozens of novels started.

We were able to track down Patrick Tomlinson, one of the authors who have recently contributed to the body of works found at BattleCorps. Below is what he had to say about BattleTech, MechWarrior Online, writing, and anything else he wanted to mention.

Dave: What was your first experience with the BattleTech universe?

PT: The earliest I can remember was at GenCon many, many years ago while it was still here in Milwaukee. There was a booth with a ’Mech cockpit simulator that I jumped into. I died immediately, even against the computer. I think it was running on the old MechWarrior 2 software.

Some years later, I ended up playing the old FASA tabletop game with some friends about the same time MechWarrior: 3 came out for PC. I lost many weeks of productive time to that game.

Dave: What is your favorite BattleTech era? What intrigues you about that era over the others?

PT: The Clan Invasion, no contest. The political upheaval, the sudden power shift, changing alliances, the injection of new military tech. Anytime in fiction that you have a big upset of the status-quo, you have opportunities for great drama, world-building, and to push your characters into unexpected and often uncomfortable places.

Things like the Vong invasion in the Star Wars EU, or the appearance of the Shadows in Babylon 5, or, (more obscure but one of my favorites in military sci-fi) the surprise attack on Manticore by the Mesan Alignment in David Weber’s Honorverse. All of these tectonic shifts in the plot and pace of the storylines brought out the best, and in some cases the worst of the people involved. It stresses systems of government, militaries, and individuals, testing them in way many weren’t prepared for. That’s when readers can learn the most about them.

Dave: With all of the various factions and places in the Inner Sphere and the Clans, where do you consider your home to be in the 31st century? PT: What’s not to love about being a mercenary? Living between the stars, selling your services to the highest bidder, picking your own jobs, surf to no man. That’s where I would want to hang my Neurohelmet. But if the merc companies weren’t hiring, I’d probably go with the Davions. As much as I love the history and development of the Clans, I doubt it would be a very nice place to live.

Dave: What is your favorite BattleTech story or novel?

PT: I must admit some embarrassment here, as I’ve only read a handful of the novels, and most of them around the same time I was losing whole days to MechWarrior 4: Vengeance. Of them, I’d say that Michael A. Stackpole’s work stood out for me, especially Natural Selection.

Michael is a wonderful tie-in writer, his Star Wars X-Wing books are still some of the best EU stuff yet written, and if you’ve never met him in person he is very approachable and knowledgeable, always willing to share what he’s learned over the years. Lately, he’s been leading the charge to educate new authors on the emergence of eBooks and what that means to both the author and the publishing industry as a whole.

Dave: Your first BattleTech story was recently published on BattleCorps. What got you interested in writing BattleTech fiction, and how did you come across the idea for your story?

PT: What can I say to this? It’s BattleTech! It’s such an old, established franchise with such a great fanbase, a nerdy writer would be a fool not to want to write for it. Now, not everyone wants to do tie-in work, and I can appreciate that. Finding a balance between my own worlds and those of others is already something I have to think about, but writing in worlds like BattleTech, Pathfinder, Star Trek, and Star Wars is the dream that dragged me into writing in the first place.

As for my recent short story, I came up with the idea for “Sore Loser” on the car ride home from GenCon. I’d met the gentleman who runs Catalyst’s fiction arm at the convention and expressed my interest in writing for the universe. He asked me to come up with a short and send it in for consideration. I wanted to tell an unusual story, from a perspective we’re not used to seeing in a normal BattleTech story. Without giving away any spoilers, I settled on a story about a simple mechanic, no ’Mech pilot, and set in deep space instead of dirtside, but stilfl featuring ’Mech combat. I’m happy with how the story shook out. I hope the fans are, too.

Dave: What have you learned about BattleTech since you started writing fiction for the universe?

PT: That it is a very technical place with rules and logic all its own. Even writing a relatively short piece lead to several back-and-forth conversations with the editor and his crack team of fact-checkers over very small details. Things like how a ’Mech would behave in micro-gravity, if a JumpShip’s reactor would send out an EMP once detonated, how Jump Jets actually work, that sort of thing.

Now, many people working in the world for the first time might think this level of attentiveness is nit-picking, but it’s really not. BattleTech by its very nature attracts a very particular, detail-oriented type of fan. They’re war-gamers and military sci-fi nerds, and they know their stuff cold. So if you’re going to maintain a top-notch product, you need to maintain it to their standards, which are much higher than say a Battlestar Galactica fan where the rules and science of how everything works is left intentionally fuzzy.

Dave: You previously mentioned that you play Mechwarrior Online. What has your experience been like with the game and player community?

PT: I love the game. Love it. It is my favorite MechWarrior videogame to date, hands down. I love that it’s not just a Call of Duty knock-off in big robots, that team-based tactics and communication is key. I love the balance they’ve achieved between the ’Mech classes, and the different roles they’re best able to fill. This is also the first time I’ve played a game in Beta, and I’ve really been enjoying watching it grow and improve with each patch. How little changes can have huge ripple effects on the gameplay.

But most of all, I think I love cornering noobs in an assault chassis who charge out ahead like it’s just another FPS. It’s such a steep learning curve for new players because the game is so fundamentally different from any other combat shooter out there. In previous games, you just sort of leveled up through the weight classes until you got into an Atlas or Daishi. Here, however, a lone light can eat a lone assault alive. You have to think very tactically, and on the fly, making constant, fluid adjustments to your game.

As for the community, it’s like any other MMO. You’ve got a majority that just wants to play and play well, then you have one occasional tool who just wants to make trouble and draw attention to themselves. I’m still a lonewolf at this point playing pug’s, mostly because I don’t want to get sucked even further into it. I have to make time to write, after all. I also have to admit that there’s a certain satisfaction running around anonymously playing among all these other BattleTech fans without any of them knowing I write for the franchise. It’s like another stage of my own personal geekdom. But I do feel the pull of joining a house, if only so I can play among a more coordinated team.

Dave: What is your favorite Mech in MWO? Do you have a style you like to follow with your Mech configurations?

PT: No good answer to that. I have a stable of nine ’Mechs at the moment: Three each of Atlases, Hunchbacks, and Jenners. They are all good at a particular role, and some really excel on particular maps. I have the Atlases and Hunchies all maxed out on the ’Mech feat trees, so I run those mostly for fun. I’m still working through the feats for the Jenners, though, because I was an abysmal light pilot for a long time.

Right now, I’m running around in a Jenner with three medium lasers, an ER PPC, and a 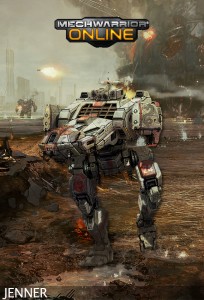 maxed out XL engine. I like the ER PPC for its decent stand-off punch. I can really help a teammate pick apart a bad guy from a safe distance with that thing. And there’s nothing quite like chewing through an Atlas’s back armor in a tiny chassis they can barely hit.

One thing I’ve never really cared for are LRM’s. They are too finicky, miss too often, go through ammo too fast, and with the introduction of the Guardian ECM, their range and over-the-horizon advantages have been severely curtailed. I don’t think any of my builds mounts so much as an LRM-5. Oh, but devs? Please give us a light gauss rifle soon!

Dave: Thank you for taking the time to tell us about yourself and experiences. Do you have any final words for BattleTech and MechWarrior fans?

PT: Thanks for having me on the blog. Take a look at “Sore Loser” and don’t be afraid to find me on Facebook and share some feedback. We authors thrive on that stuff. Other than that, I’ll see you on the maps. Good luck and good hunting.

You can check out Patrick’s BattleTech story, “Sore Loser”, now on BattleCorps.