Ron: When did you get into BattleTech? Which medium do you prefer?

AS: MechWarrior is what drove a lot of my artistic motivation, particularly when MW4 came out. I work my way backwards in the games from there. I filled my high school workbooks with Mech thumbnails, that combined with a drafting class gave me a solid understanding of perspective.
I had played a demo of MW2 when I was young, but I didn’t know how to work the throttle, so that was a turret demo for me. All the enemies being able to move didn’t seem very fair. Mech Commander Gold was my first BattleTech game, and shortly after I bough MW4 which solidified my interest in the universe. It took over almost the entirety of my artistic interest. I have never played a physical game of classic BattleTech, though I did get into the Dark Age tabletop for a while before the number of expansions became too much to keep up with. I like to paint but I’m not much for making nice minis, so the ready to go nature of MWDA appealed to me.

As for artistic medium I work almost exclusively in Photoshop with a wacom tablet, only touching paper when I’m away from my computer, in which case I like to use ink pens. 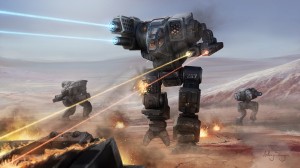 Ron: How did you get involved with Catalyst Game Labs, and what is some of your favorite works you have done for them?

AS: Way back, somewhere around 8-9 years ago I contacted Randal Bills to ask how I could help them. My art was pretty rough back then, so it’s understandable (now) that I was ignored at the time. A little over 2 years ago I was contacted by CGL to do the interior work for XTRO Marik, and it’s been going along ever since, though slowly at times.

To date my favorite work for them has to be the Experimental Marauder Cover for XTRO Succession Wars. I was called in to assist Matt Plog with the design, having just completed my version in public, with public feedback. I was excited to see something community built become canon (if only experimental), especially for an unseen.

Ron: Do you have a favorite ‘Mech to draw, and is it a favorite to play?

AS: Due to the constant demand both in commissions and requests for BattleTech art I try to not paint the same Mech multiple times as the list of Mechs needing attention is never ending. This mentality has also lead me away from favoring a particular Mech. My current ride in MechWarrior Online is the raven though, I like being a troll.

Ron: Can you give any advice for aspiring artists out there? Having gone to art school myself I know how rough it can be to make a living as an artist.

AS: I’m always asked what my special tricks are for how I got where I am now, but looking back I can’t really think of anything in particular, of course I probably take some things for granted. My main piece of advice is simply practice and study. Pure volume of work will get you places. Always be referencing from reality, if you think outside the box you can find a photo reference that applies to almost anything unreal.

As for those aspiring to become an official BattleTech artist. If you can honestly look at your own work and say yours is better than 75% of what you see in recent publications, get your foot in the door :)

Ron: Have any new projects to plug or mention?

AS: I’m always chipping away at my own art/story project. Though I’m still quite a ways from making anything tangible from it. All my latest art and any announcements I make can be found on my Deviant Art Page.

Ron: I saw from lurking Deviant Art that you subcontract out to other artists. About how many commission requests do you get per month?

AS: How many commissions I do a month jumps around a lot but in the end it always somehow pays the bills, even when it seems like it shouldn’t. I could be finishing anywhere from 5 to 15 pieces a month depending on their size. Time spent is usually 2-6 hours a day, definitely higher when doing official BT work because they don’t pay up front like everyone else so those I don’t count as income.

If a client buys out all my time I will put together a list of other artists looking for work to redirect inquiries. It really helps out the new guys that need their first break. This is how I got my first break too.

Ron: Very cool that you managed to turn a game you love into a living. Not many people can make that claim. Especially artists these days. Thanks for your time.