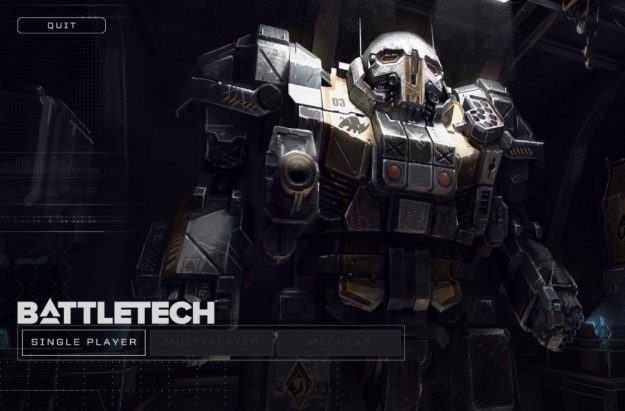 The much anticipated Backer Beta finally began last Thursday with Kickstarter backers receiving Steam codes to take part in beta testing BattleTech, the latest game from Harebrained Schemes. As a backer myself, opening that email felt like Christmas morning, and seeing mom and dad had gotten me just what I wanted. Then I played the game I’d been waiting for oh so long and found out I got even more than that. Many of you will know exactly what I’m talking about, but for you unlucky readers who didn’t get in on the Kickstarter let me tell you what you’re missing.

First off, a little bit of staging is in order. The backer beta is single player skirmish mode only, pitting one lance against its opposite. The default light assault lance features not one, but two UrbanMechs, showing us that Harebrained Schemes has a good sense of humour to troll everyone right out of the gate. You can select what ‘Mechs are in your lance but you can’t customize your ‘Mechs just yet, although that is going to be in the final version of the game. 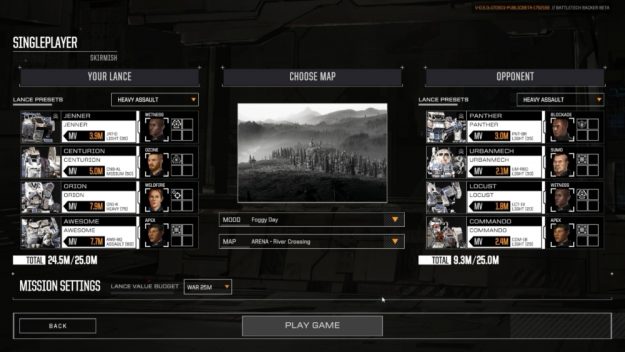 Skirmishes are limited based on “Mech Value”, which is similar to Battle Value in that it’s based on the ‘Mech’s combat effectiveness. When picking a ‘Mech you’ll be presented with 8 stats that generally describe their performance: initiative, heat, speed, range, durability, firepower, stability, and melee. Most of this will be familiar except for stability and initiative which only describe how well a ‘Mech weathers fire and whether or not a ‘Mech goes first in turn order. Generally, the heavier the ‘Mech the more stable it is but it will act later in the turn.

Alright, let’s get to a few games. 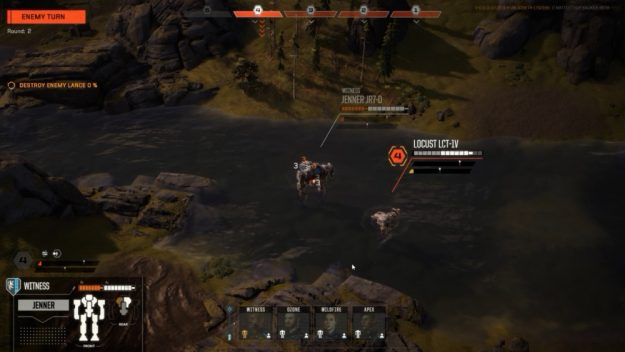 My first game upon installation was just me using the default team and squaring off against the same ‘Mechs with the same pilots: 2 UrbanMechs, a Hunchback and a Kintaro. I had no idea what I was doing, so I felt that a game on equal footing would be a great way to learn – sort of a trial by fire. What could possibly go wrong?

Well, lots of things, but we’ll get to that.

The first thing you notice when you get in is the similarity between BattleTech and the old MechCommander series, but where MechCommander was 3D sprites on a 2D battlefield, this game is entirely rendered in gorgeous 3D. And when I say gorgeous I really do mean it – all the ‘Mechs are the same models as found in MechWarrior Online, but now you have the chance to zoom in and really examine them up close and from every angle.

I took a moment to just appreciate my massive machines before I set them off moving. The familiar hexes of the table top are gone, but instead you have these little points you can run your ‘Mech off to. They operate the same, with your ‘Mech being able to run further the faster it is and also taking more movement “points” to turn your ‘Mech in a specific direction once you get there.

I set my lance to run to the river with an UrbanMech staying behind to provide cover from the clifftop. Through the fog my lance’s sensors picked up my opponents charging in, and they wasted no time picking my lance to pieces. They used cover, abilities, and movement to their advantage, flanking my Kintaro and melting its rear armour until its fusion engine blew out its backside. My first UrbanMech died to a Hunchback blast to the face, and my own Hunchie fought valiantly before succumbing to the combined fire of the enemy. My remaining UrbanMech no longer had a spotter for his autocannon, and so dutifully charged to his doom at my command.

Even though I’d lost (rather spectacularly I might add) I loved how alive the combat felt despite the fact it was still a turn-based game. When missiles are fired the trees will sway at their passing. The ground will rumble more with the footsteps of larger ‘Mechs versus their smaller brethren. You’ll see armour glow and melt off a ‘Mech when struck by a laser, and you’ll see the camera switch to an over-the-shoulder viewpoint so you don’t miss a second of watching your giant death machine spew fiery destruction at its unfortunate target.

That said, the computer knew what it was doing, and I clearly did not. Time to ratchet down the difficulty. 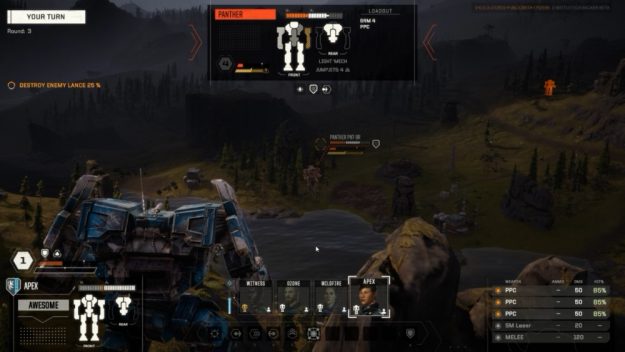 There’s no actual difficulty setting in the beta, so I did the next best thing: I made my opponents into a lance of 2 UrbanMechs and 2 Locusts versus my heavy lance of an Orion, a JagerMech, a Centurion and a Shadowhawk. After stacking the deck sufficiently in my favour I also took a little extra time to read about my pilot’s abilities and try to match them to their machine. Satisfied, I hit the launch button and set my ‘Mechs on their way.

Since I already had a massive weight advantage, I decided to split my lance into two ‘Mech elements – my Orion and JagerMech went one way around the mountain and my ShadowHawk and Centurion took the longer way. My expectation was the medium ‘Mech’s speed would get them back to the heavies if they ran into trouble.

And they did. The enemy Locusts immediately pounced on the lighter elements of my forces. Once again the computer used tree cover to their advantage, but the massive firepower my mediums possessed obliterated one Locust and disabled the other with a shattered leg. But suddenly the UrbanMechs appeared and my enemy’s plan was apparent: the Locusts were bait, there to delay my mediums so they could fall prey to the UrbanMechs combined AC/10s. A lucky headshot took down my Shadowhawk, and the my Centurion was badly mauled as it retreated, but not before finishing off the lamed Locust.

Not quite according to plan, but by then my heavy ‘Mechs had ambled into range of the UrbanMechs and were raining ordinance with impunity. It was only a few rounds before all my opponents were reduced to scrap, resulting in my first victory! I relished the triumph, even though it was against vastly inferior forces. But I wasn’t some honour-bound clanner, so I didn’t let it get me down. 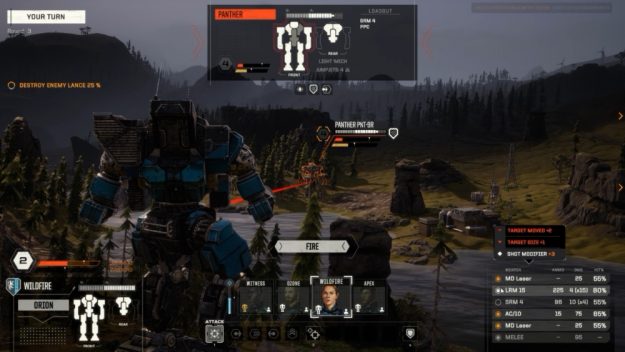 Round 3 – Where’s The Fun In Fighting Fair?

I still didn’t feel like I was up to a fair fight, so this time I went with a theme. My opponent would be a better balanced light lance against my own heavy assault lance. I swapped my JagerMech for an Awesome and my Shadowhawk for a Jenner that I’d use as a spotter for the Awesome, retaining my Centurion and Orion.  My opponents would be a Panther, a Commando, a Locust and another UrbanMech.

My Jenner had the clear speed advantage over every ‘Mech on the battlefield, and I made sure to give its pilot the Sensor Lock ability which would allow my heavy mechs to fire at anything my Jenner could see at the cost of my own Jenner’s ability to fire. This proved to be instrumental, as I was able to spot the opposing Panther and soften him up with a few PPC blasts from my Awesome that I had perched atop a cliff. My Centurion and Orion were both able to quickly finish off the Panther, but my Jenner ran into trouble when it was double-teamed by the enemy Commando and Locust. They managed to mangle my poor Jenner, removing most of its armour and its right arm, before my Awesome disabled the Commando and my Orion was able to take out the Locust using its long range armaments.

The final moments of the enemy UrbanMech played out like a holovid, with my entire lance converging on the unfortunate pilot while picking off bits of armor. My Orion finally managed to land the deathblow to secure victory once more.

It may have only been three lance vs lance battles, but each one felt epic in a way that’s never been achieved in a BattleTech game, and there’s going to be so much more once the final game is released. From experiencing the core of the game in these skirmishes, I can say without exaggeration this could be the best BattleTech game of all time.

BattleTech is set to release later in 2017 (but there’s still time to get in on the beta).