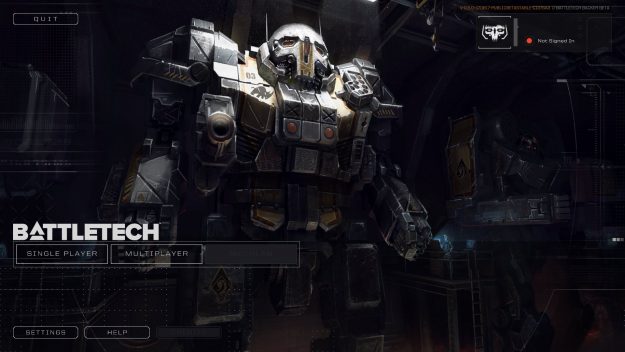 It’s been a few months since our first look at Harebrained Schemes‘ upcoming BATTLETECH turn-based RPG, and I thought it a good idea to see how things are progressing. As reported last month there are lots of changes made to the game since its initial release in June, and while the original beta version had just as much giant stompy robot action as one could have hoped, it was still certainly a rough first draft. Let’s take a look to see how the second draft has shaped up.

As you may recall from my initial foray into BATTLETECH the AI handed me my metallic ass on a silver platter, forcing me to tip the scales in my favor with a massive weight advantage. I remembered too, so my first game did exactly the same thing, pitting my Centurion, Kintaro, Griffin, and Victor against an enemy lance consisting of a Jenner, Locust, Centurion, and a Commando.

From my first game, I’d come to appreciate the Centurion as a tough, workhorse medium ‘Mech, able to dish out as much punishment as it can take in return. The Kintaro, Griffin, and Victor were new designs (in terms of never having used them before) but seemed to make a good mix of long and short range firepower. My enemy would be highly mobile but vastly outgunned, and I hoped to use that to my advantage by simply barreling up to my foe and alpha-striking until they all dropped dead.

Nobody ever said I was a subtle tactician. 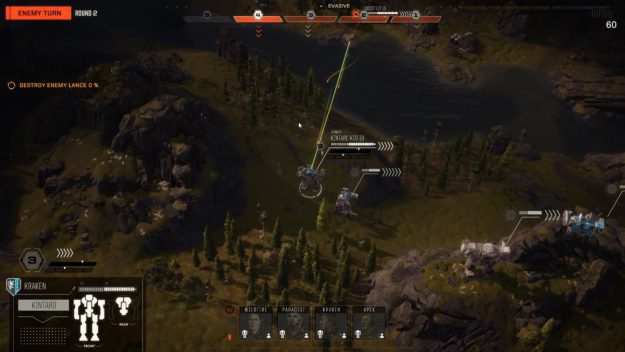 Going into the match I remembered there were a lot of changes between the September version and June version of the game. To start, all MechWarriors now have two abilities to contend with rather than the original one. There would also be an increase in frequency and severity of critical hits, something that might drastically affect lighter ‘Mechs without nearly as much armor as my heavier units.

I was very right on that point.

My lance ambled up to the river and made a firing line while the enemy AI ran towards me at full speed. The Locust appeared first, firing its SRMs and medium laser into my Kintaro, which shrugged off the damage. I would continue to be impressed by the Kintaro’s toughness throughout the fight.

Of course, having run head-long into a firing line of 240 tons of guns and armor, the poor Locust did not survive the return salvo from my lance. One down, three to go.

The enemy lance continued to approach, but still in a piecemeal fashion. Next up was the Jenner who, while tougher than the Locust, suffered grievous rents in its armor from a full blast of my Centurion’s weaponry. My Victor, which had been hiding in the forest that lined the ravine, then pounced on the poor Jenner, sealing its fate.

Compared with June, I noticed that the light ‘Mechs went down significantly easier than before. Three crits to the center torso are enough to destroy the engine, and it was knocking out lighter machines much faster than the heavier ones. Whether or not this will remain in the final product is yet to be seen, but for now I’d certainly recommend more heavily armored light ‘Mechs for survivability.

This left a Commando and a Centurion to contend with. The Commando took a full barrage from my Griffin as it peaked over a hillside, crippling it. It then suicide-charged into my Kintaro, who greeted it with a full fusillade of 18 SRMs. He never stood a chance. 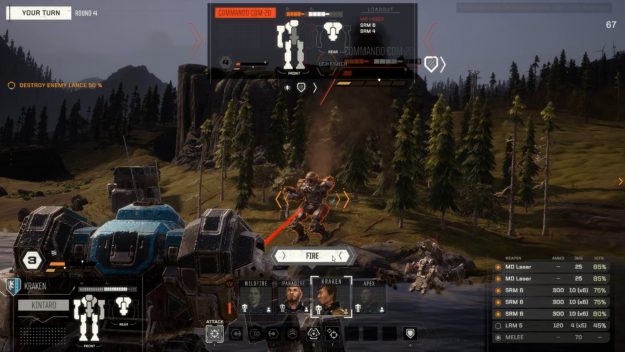 With my full lance encroaching on his position, the remaining enemy Centurion attempted to flee. The combined long-range firepower of my Griffin and Centurion managed to tag it before it could get too far away, and my Victor stepped behind it to wrench off the ‘Mech’s AC/10 with a few well-placed shots. My Kintaro then provided the coup de grâce.

Along with the ease by which lighter ‘Mechs succumbed to fire, I also noticed that the enemy AI seemed much easier than back in June. Also, the heat effects around a ‘Mech were much more noticeable, with an overheating ‘Mech glowing orange and a simmering machine displaying a hypnotic mirage as it dissipated its head load.

Now that I’d been convinced I wasn’t about to get my ass kicked by a bunch of silicon, I decided a fair fight was in order. I queued up another game with both of us in roughly equivalent machines. My paired Centurions, a Panther, and Commando versus their Locust, Commando, Vindicator and Shadow Hawk. I hoped my Centurions would be able to tough out the worst of the damage thrown my way.

This time the two lances danced around each other for some time exchanging LRM fire, before a lucky shot from the opposing Shadow Hawk’s AC/5 blew out my Commando’s center torso. Horrible visions of my previous defeat danced through my head, and I desperately pivoted my remaining ‘Mechs away from the deadly Shadow Hawk.

Lucky for me the enemy pursued with their lighter elements leading the charge, which allowed me to pivot back and pummel both the Commando and Locust into scrap with minimal damage to my own forces.

Thus began a long exchange of ranged fire as our lances faced off over a large gorge. My first Centurion was crippled, then killed by combined autocannon and PPC fire, but my brief ‘Mech advantage proved telling. The enemy Vindicator lost its PPC, and my own Panther’s PPC took the Shadow Hawk’s right arm off. 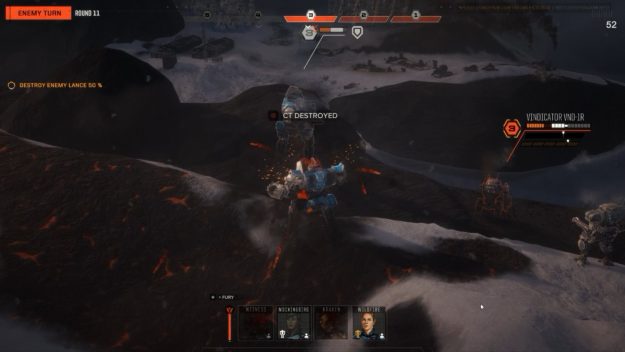 To finally end the battle I decided to use the replacement to the morale mechanic called “focus”. I’m still not 100% sure how it works, but it seems to allow surviving, toughened MechWarriors to fire a hyper-accurate shot. I told my Centurion to focus and fire all remaining weapons, which finally took the Shadow Hawk down.

The crippled Vindicator was easy prey for my Panther, who managed to perform a Death From Above maneuver successfully to further damage the already defeated machine. Risking overheat, I ordered my Centurion to alpha strike again and finally put the Vindicator down.

Obviously, given my stunning come-from-behind victory, the enemy AI in this game has been heavily tweaked since June. The survey that popped up following the match confirmed this by asking questions about enemy ‘Mech performance. I naturally answered the AI was perfect, since I’d just won, but at no point did I feel like I was facing a complete pushover. Only when I vastly outweighed my opponent did I feel like I was invincible, which is probably the way it should be. 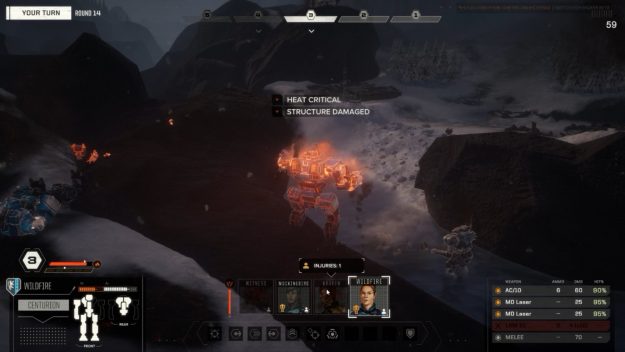 I had intended to make my third game a review of the nascent multiplayer experience, but unfortunately, the servers were down when I clicked it. So if you’d like to be featured on the next BATTLETECH Backer Beta, let me know in the comments and we’ll see if we can arrange a game!