“This is Star Captain Nick Hammond of Clan Sea Fox. I issue a Trial of Possession for your dining room table. I bring my command Star of BattleMechs. With what forces will you defend?”

This was the general message that I received from a buddy of mine who had just finished building his first Clan Star, a 3145 era Clan Sea Fox unit. I really enjoyed his approach to asking if I wanted to play a game of BattleTech that weekend, so I decided to respond in kind.

“This is Star Captain Rick Hall of the 2nd Bear Regulars. I acknowledge your batchall. Though I have my entire Trinary at my disposal, after reviewing your bid, I will defend my dining room table with three BattleMechs from my command Star, including myself. You accept my bid, quiaff?”

“Aff, Ghost Bear, though you truly underestimate Clan Sea Fox if you think that a mere three of your warriors can defeat five Sea Fox warriors. Never the less, I do accept your bid.”

“Very well, Star Captain Nick Hammond. In 24 hours, we shall meet at the coordinates I am sending with this transmission. There we will decide the fate of my dining room table.”

I was more than thrilled at my friend’s insistence on roleplaying out the bidding process, and we decided to treat every aspect of the game as a true Trial of Possession, straight down to the zellbrigen rules and everything else. Being the defender, I was able to choose the battleground, and I made the tactical decision to fight on the BattleTech Canyon maps.

I knew that two of his Mechs did not possess jump jets while all three of myMechs were equipped with them. That would help to mitigate the numbers advantage.

Before I get into the battle itself, here are our rosters. ROUND ONE – I won the first Initiative roll, and we decided to enter the board from our respective sides for our first turn, to get the battle moving. Being the defender, I did not see a reason to rush forward. The Ghost Bears advanced at a walking pace, and the Sea Foxes moved into the engagement area at speed. 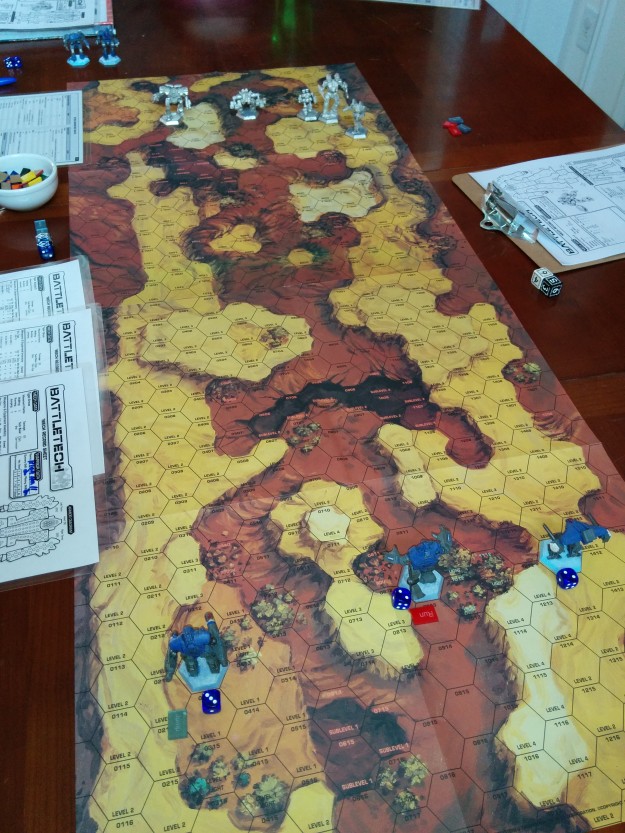 ROUND TWO – The forces closed in on one another, and while no shots were fired, two duels were initiated and accepted. The first, between the Karhu and the Arcas, pit the two Star Captains against one another. For the second, the pilot of the Warhammer IIC challenged the MechWarrior in the Bruin. I was glad to accept both duel challenges, even though technically I could not, by the rules of zellbrigen, refuse them. My Kodiak stalked around the canyon floor unchallenged while the remaining three Sea Fox `Mechs moved into position. 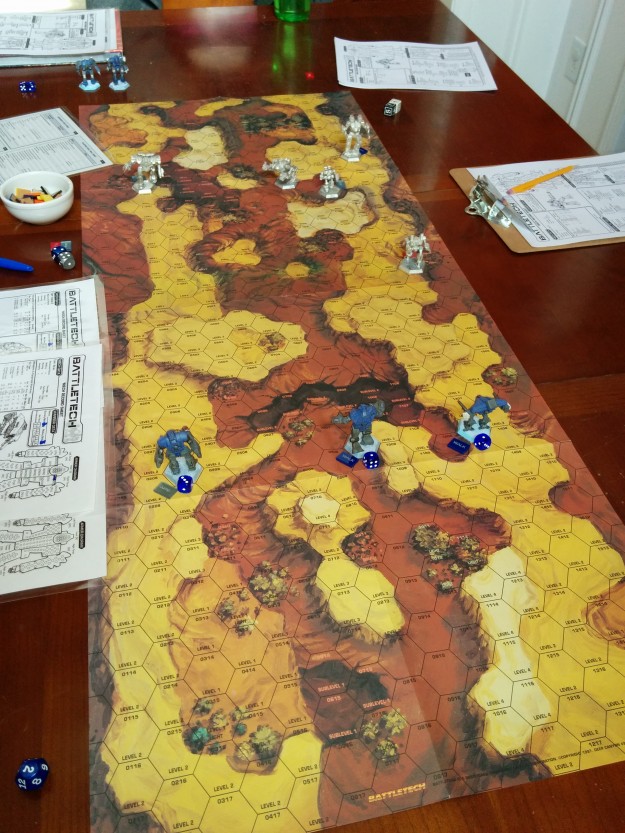 ROUND THREE – The Bruin  and Warhammer IIC drew up position and opened fire. A great assault Mech battle had begun, with bothMechs taking hits from the opening salvos. The Arcas pilot, making sure to keep his opponent in sight and in range of his ER Large Lasers, jumped out onto a large outcropping of rock and scored the opening hits of his duel with the Karhu. The Karhu was unable to close range and make use of Ultra AC20, and he missed his is Medium, Lasers.

Meanwhile, the other three Sea Fox Mechs began bidding with the <em>Kodiak </em>pilot, hoping to get him to agree to a 3v1 duel. The <em>Kodiak</em> agreed to an initial 2v1 match with the thirdMech able to jump in once one of the other two `Mechs lost a limb. No shots were fired in the 2v1 this round. 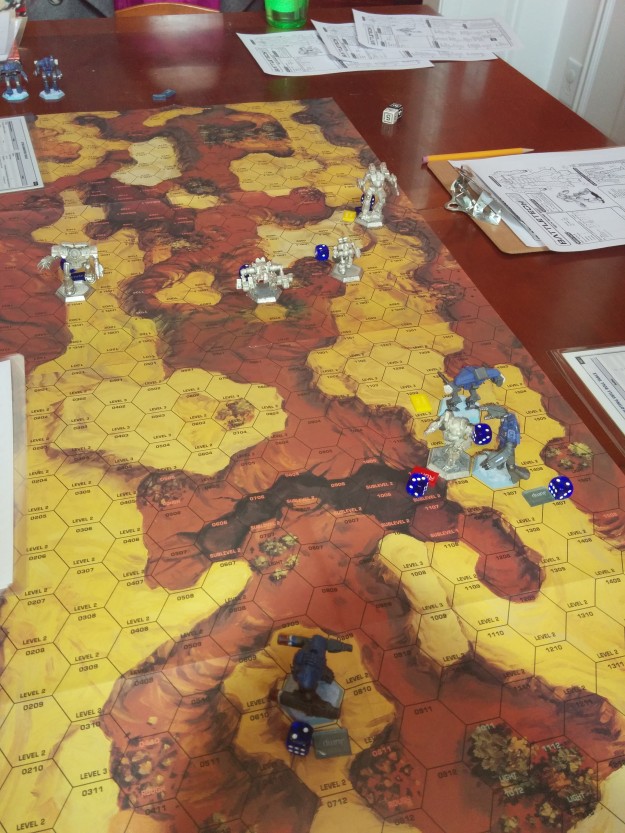 ROUND FOUR – In an effort to keep as mobile as possible, Star Captain Rick Hall jumped his Arcas back onto the canyon wall. This allowed Star Captain Nick Hammond to move his Karhu into long range for his Ultra AC20. The right side of the Karhu took heavy damage from the Arcas’ ER Large Lasers while the Karhu rapid fired its autocannon, scoring a hit on the Arcas’ left arm.

The Warhammer IIC and the Bruin stomped towards one another kept at their game of minimal movement and maximum weapons fire. Both assault `Mechs were already looking fairly shot up after two rounds of duking it out.

The last duel finally got underway this round, with the Kodiak moving into a defensive posture in a nook of the canyon wall, leaving his opponents in sight while blocking his faster opponents from getting behind him. The Kodiak’s weapon fire blew off the Tiburon’s right arm, so by the terms of the duel, the last Sea Fox `Mech, the Koshi, was able to enter the fight and make it a 3v1 against the Kodiak. 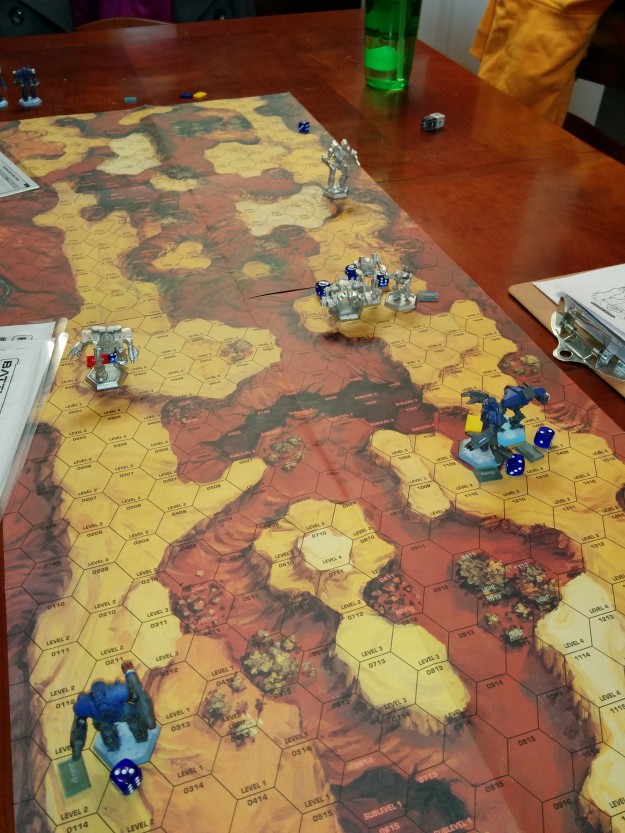 ROUND FIVE – The implacable advance of Nick Hammond’s Karhu finally saw favorable range for his giant autocannon, but Rick Hall’s Arcas gave as good as it got in this round. Scoring two Ultra AC20 hits, one to the Arcas’ undamaged arm and one to the Center Torso, the Karhu received damage from an ER Large Laser, two Streak SRM4 salvos, and two Medium Pulse Lasers. The unit commanders were definitely gunning for each other in order to get the edge for their respective Clan.

The Warhammer IIC suffered the loss of one of its ATM racks thanks to a fortunate Gauss rifle strike that took advantage of an earlier hit from the Bruin. Return fire was keenly felt, however, as the Bruin suffered armor breaches in no less than three locations. The Bruin was fortunate and suffered no Critical Hit damage.

The Kodiak’s position continued to serve it well, as its three opponents moved into range to gain firing positions. The 100 ton assault `Mech suffered only a few scratches while felling the Tiburon, which ended up armless and missing a leg, on its face in the canyon. The 3v1 was now a 2v1. 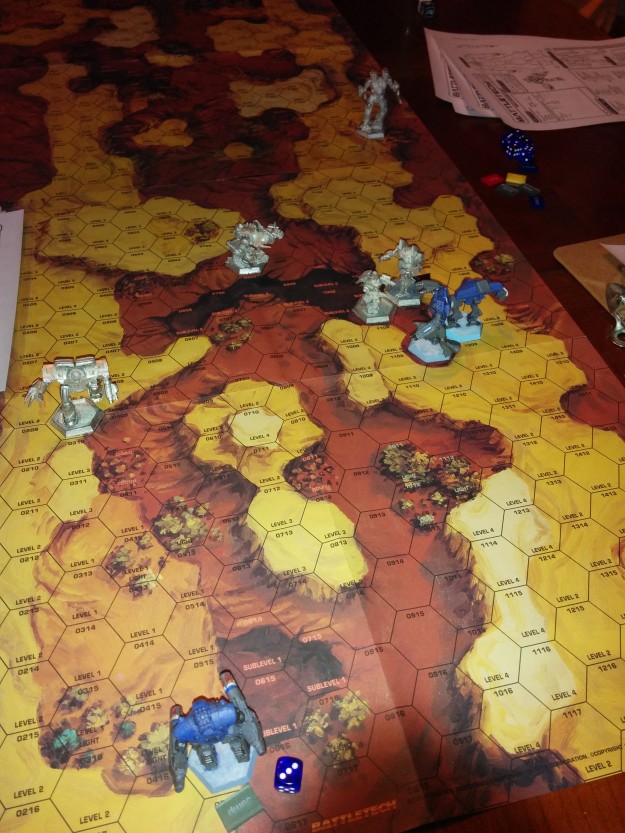 ROUND SIX – Having suffered a lot of damage the previous round, the Arcas jumped across the canyon to the opposite wall in an attempt to gain some distance between it and the Karhu’s autocannon. The Karhu, being just as quick, was able to keep a good distance between the two by jumping into a good firing position on the opposite canyon wall. The ensuing weapons fire resulted in a very lucky Engine Critical on the Arcas and the right leg, arm, and torso armor locations on the Karhu being breached. Both `Mechs were still operational, but the Arcas would now begin to suffer a speed disadvantage.

The remaining to Sea Fox `Mechs dueling the Kodiak elected for a slight dishonor upon their records, and the Sea Foxes gained 2 Dezgra Points as the Black Hawk and the Koshi both moved out of line of sight of their opponent. 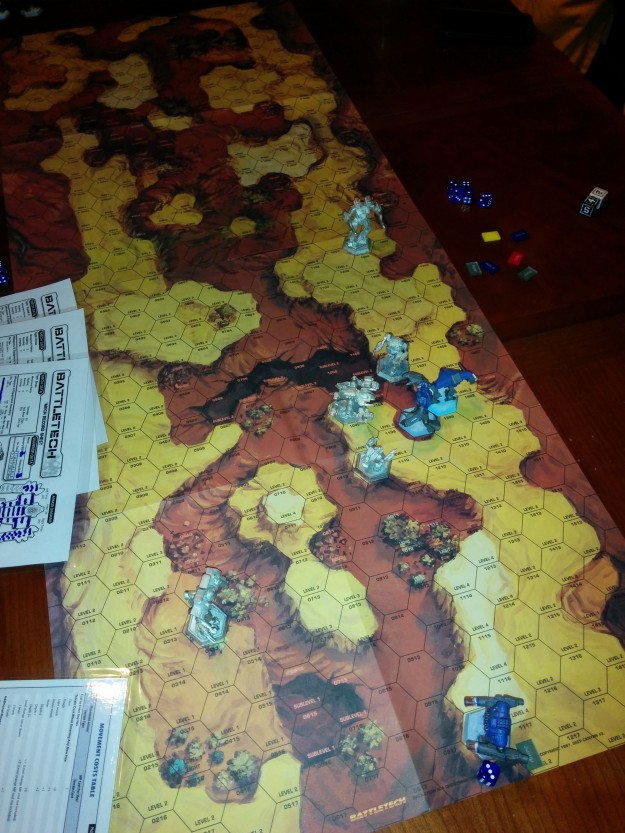 ROUND SEVEN – The Arcas decided to take a chance, knowing that it could no longer out run the Karhu, and stood still, challenging his Sea Fox opponent to come finish the duel. The Karhu jumped into some woods for extra protection, and the two opponents did their best to fell their foe. The Arcas took more damage and suffered several armor breaches, but it suffered no further Critical damage. The Karhu took damage to its mostly untouched left side, a lucky break for the Sea Foxes, as any hits to any right side location would have crippled the Karhu.

In the deciding round for their duel, the Bruin and Warhammer IIC advanced towards one another, each warrior vowing that this round, only one would be left standing. The firepower sustained by both Mechs would have felled nearly any otherMech on the battlefield, save the Kodiak, and when the dust settled, the Bruin stood victorious, having suffered a total of two Engine Critical Hits but otherwise remaining operational. The Warhammer IIC found itself without its entire left side. Combined with the previous loss of its right arm and ATM pod in its right torso, the Warhammer IIC was without weapons and admitted defeat at the hands of the Bruin.

Enraged that his opponents would insult him by running away, the Kodiak jumped into position to engage both of his remaining opponents. Though they fired back with everything they had, the Sea Fox `Mechs just could not do enough damage to slow down the Kodiak. The Koshi ended the round completely crippled, unable to move or fire back. Only the Black Hawk remained of the Kodiak’s opponents. 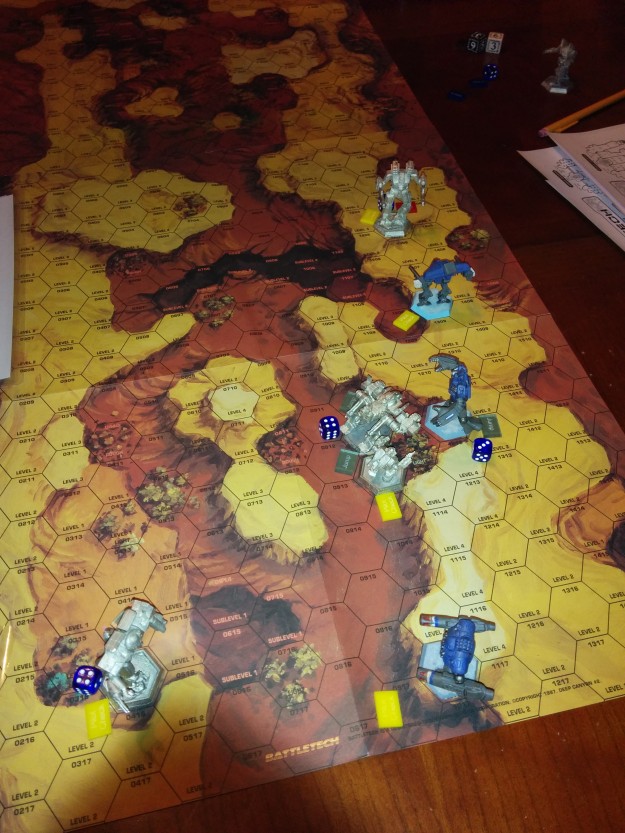 HEGIRA – At the end of Round Seven, the Sea Fox player took stock of his situation. Even if the Karhu could beat the Arcas, it would still have to contend with the Bruin and a Kodiak that was still well above 80%. His gamble had failed, and the Ghost Bears had already won. It was at this point that the Sea Fox player respectfully requested the Clan tradition of hegira for his unit.

“Star Captain Rick Hall, this is Star Captain Nick Hammond. Your warriors have demonstrated great skill and warrior spirit this day. I and my warriors stand in awe of your personification of your Clan’s totem. As such, I formally request that you grant I am my remaining warriors hegira. Well won, Star Captain.”

POST ACTION – After the game, as is customary, we had a lengthy after action discussion about what went right, what went wrong, and what could have gone differently beyond dice rolling better in any case.

We agreed that the Sea Fox player had made crucial mistakes in his choices for engaging the Ghost Bear Mechs. Instead of the match-ups that happened, we determined that the <em>Warhammer IIC </em>should have been the opponent for the <em>Kodiak</em>. In that case, the <em>Warhammer IIC</em> could have inflicted serious long and medium range damage to the heavier assaultMech before the Kodiak closed to the range where it could deal out serious damage. Perhaps not a perfect match-up, but certainly more favorable and more tactical.

The Karhu should have challenged the Bruin where it could have employed its faster speed to gain advantage and get in closer range to more aptly use its Ultra AC20. In the dual as it happened, the Arcas was able to match the advancing speed of the Karhu and mitigate the damage of the huge autocannon with range, something that the Bruin would not have been able to do. Once again, not a perfect match-up, but likely more favorable.

That would have left the Arcas, which would have been much more of a fair match for any two of the remaining three Sea Fox Mechs, allowing one of the Sea FoxMechs to be truly kept in reserve should it be needed to jump in and engage a free Ghost Bear `Mech.

This was a really fun game for both of us, and the roleplaying dialogue and interactions that we included only heightened the impact of the game’s results.

So, for now, my dining room table is safe.