Last March we got a sneak preview of the new BattleTech box sets that were set to come out later this year. A beginner box for $19.99 and a full-set box for $59.99, with both boxes filled to their respective brims with brand new miniatures, maps, and even a delightful new short story.

We had plenty of details, but we never received a date. We were left to wonder when–oh when!–our fair lady would finally arrive. Well, wonder no longer.

As updated on the Catalyst Game Labs news page, BattleTech Beginner Box Set and A Game Of Armored Combat will debut at this year’s GenCon.

The store release will still have to wait a bit, sadly. Wider release at your local neighborhood miniatures and game shop will follow “soon” after GenCon, but we don’t have specific dates. Here’s hoping they’re already in transit and just waiting to be loaded off the trucks. 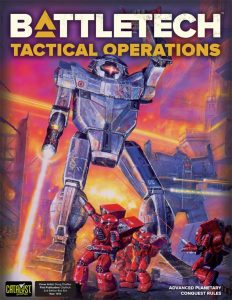 Both box sets come with an all-new, never-before-seen 48-page novella from William H. Keith detailing the saga of Carlyle’s Commandos and how their surviving members eventually formed the core of what would become the Gray Death Legion.

On top of that momentous news, Catalyst has also revealed new vintage cover art for their hotly anticipated rulebook reprints. Classic art from 1987 and 1994 will adorn the faces of BattleTech: Total Warfare, BattleTech: TechManual, BattleTech: Tactical Operations, and BattleTech: Strategic Operations, available now for $15 in .pdf format. See if you can spot the original books where these iconic pieces were taken from.

GenCon is set to begin August 2nd, so it won’t be long before we finally get to see these box sets in the flesh. Or rather, paper with a bit of plastic. Whatever.