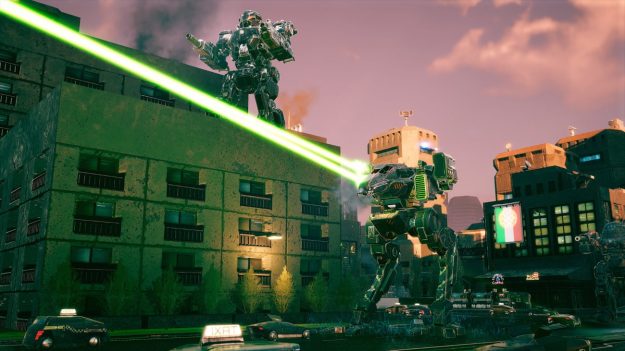 Development of BattleTech continues over at Harebrained Schemes with the recently announced Urban Warfare expansion. We knew this one was coming when the whole season pass thing was announced, but now we know when it’s coming and what we’re all in store for.

As the name suggests, the first thing we should get used to is the idea of fighting in an urban environment. That’s right: ‘Mechs are going to brawl in a city, and suddenly the UrbanMech isn’t looking half bad.

The important thing to note here is that every building–EVERY. SINGLE. ONE.–is fully destructible. This means that you can either go around a building or, as is my preference, through the building to get at the enemy. However, it should be noted that not every building will leave a convenient ‘Mech-sized hole to walk through. Some high rises will just flat-out collapse and leave a building-sized pile of rubble that you can’t just smash or shoot your way through.

On top of that, there’s going to be gas and transformer stations that can really change the face of combat. At the very least, there will be a lot more tactical options to consider in every engagement.

Along with the new urban biome comes a bunch of new tech. In this case, Lostech. ECM and Active Probes are coming to BattleTech, and they’ll arrive in the first new ‘Mech we get to discuss: the RVN-1X Raven.

The RVN-1X was the very first Liao prototype pushed into service in 3024 to beat back the invading Federated Suns armies. It was equipped with a prototype Electronic Warfare system that combined the ECM and Active Probe into a single 7.5-ton device, which really cut into the Raven’s available tonnage. This meant that either weapons or engine would have to be sacrificed in the name of this EW suite, and the 1X chose engine. It can wobble at 86 kph, which puts it on the slow side for a light ‘Mech, but not as slow as the UrbanMech.

We’re not 100% clear on how ECM is going to work, but we do know it will disrupt enemy targeting and provide immunity to indirect fire. This likely means that ‘Mechs covered in an ECM umbrella will simply be harder to hit in combat.

The Active Probe is described as being able to “reveal, locate, and target enemy units that would otherwise be hidden.” That’s a little vague, but we’re hoping it also increases overall sensor range, and might even add something to indirect fire targeting (ie. LRMs).

Our next ‘Mech is the beautiful Javelin. We’re not given the exact designation of which Javelin, but I’m thinking it’s at least going to be the classic JVN-10N with its twin SRM-6 packs. There are a lot of other Javelin variants that could be added here as well, but we’ll have to wait and see what Harebrained says about it. 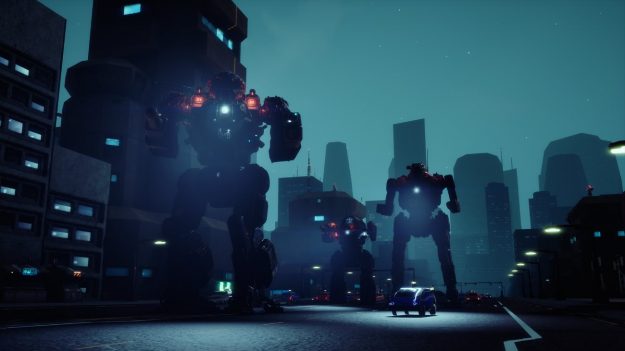 Three new enemy tanks join the fray, including the Gallant, the Packrat, and the Rotunda. The Gallant is particularly noteworthy for being an incredibly old design! Circa 2551, to be precise, but it’s still equipped with a potent arsenal that MechWarriors cannot take for granted.

The Packrat is described in our beautiful Wiki as having an SRM-6 and a Flamer, but Harebrained seems to have made a bit of an alteration to give the Packrat ECM. The Rotunda scout car has also been switched up by having an Active Probe added to its arsenal. It seems doubtful with an Active Probe on board that the Rotunda would still have room for a Large Laser and an SRM-2.

Urban Warfare will also expand BattleTech’s Flashpoint system with more possible encounters, special events, critical choices, and Lostech loot. There will also be a new mission type called Attack and Defend where the objective is to “destroy an enemy’s base to stop a steady stream of attackers before they can overcome your forces and knock out your employer’s base.” Which sounds hard.

Urban Warfare drops June 4th. After that comes Heavy Metal, and Harebrained has already said that some Unseen ‘Mechs will come along with it. Judging by the name, I’m gonna guess that we’re going to see the Warhammer, Rifleman, and Marauder. We’ll see how accurate that prediction is later.