Welcome to Community Outreach! This week we speak with Todd “Mastergunz” Farnholtz, a BattleTech Miniature painter and admin at CamoSpecs Online, the biggest site and Facebook group for miniature ‘Mech painting enthusiasts. We ask him about CamoSpecs, how it came about, and how he joined up to help define the unit colors of ‘Mechs the universe over. Enjoy!

Mastergunz: My name is Todd Farnholtz, but I go by the handle ‘Mastergunz’ on CSO. I joined the group in Summer of 2009 – just in time to get a single piece done and added to that year’s Gencon 2009 CSO diorama. It was a Word of Blake Raptor II and I rushed to paint it because the mini had just come out and wanted to display it on the board. I’ve been playing BattleTech since 93′,  so having an opportunity to be a part of the game I loved was a huge achievement for me. 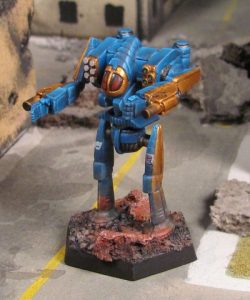 Sean: What is CamoSpecs? That is, how would you describe it to someone who doesn’t know much about it?

Mastergunz: CamoSpecs.com is a 100% fan run organization that provides visual references to canon paint schemes for the BattleTech universe. While we do get support from IWM (Iron Wind Metals) and Catalyst for special projects, the site and its upkeep is 100% on us. We are a dedicated group of artists that comb all available canon sources to make sure what we paint is accurate to what is written. We have even at times been asked to create schemes for new units as they were created by the authors.

Sean: When did you join CamoSpecs?

Mastergunz: I joined in 2009 after 2 failed submissions; finally made it in on my 3rd attempt.

Sean: What was the original idea behind CamoSpecs?

Mastergunz: I wasn’t around for the initial inception, which was 2 years prior I believe. The site and what it sought to do was conceptualized and inspired by the old FASA Camo Specs book showing the various paint schemes of the units in the BattleTech universe. 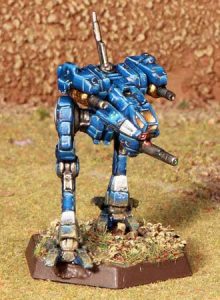 Mastergunz: I started playing BattleTech in 1993 with the 2nd Edition box set after having played the old MechWarrior computer game.

Sean: And when did you get into miniature BattleTech making?

Mastergunz: I’ve always been a lover of all thing giant robots. Starting back in the 80’s with Transformers, Voltron, Robotech, etc… the 2nd Edition box set is what introduced me to miniature wargaming and painting. Kit bashing the various variants of the ‘Mechs was just something that we all did from the start. 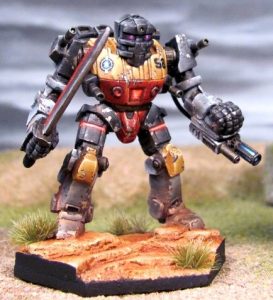 Sean: How long does it take to make some of these miniatures?

Mastergunz: I can’t speak for the sculpting side of things but painting a single mini used to take quite a while. In the beginning I would spend 6-7 hours on a single piece to get it to tabletop standard. As with all things in life, practice makes perfect (and learning to use an airbrush didn’t hurt) so I can finish a ‘Mech from primer to seal coat in about 3 hours now and feel it is of display quality.

Mastergunz: Hands down the AWS- 9Q Awesome. I’ve never been a finesse player so something that hits hard and can take a beating is right up my alley. The 9Q is the original zombie. I even have a licence plate frame on my truck that says ‘My other ride is an AWS-9Q’. 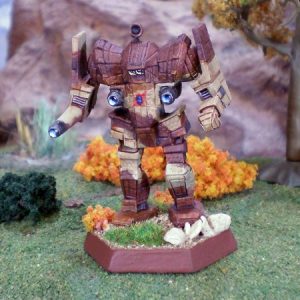 Mastergunz: My favorite ‘Mech I’ve ever built and painted for BattleTech/CSO changes constantly as my skills improve, but I’d have to say my most recent favorite was the Zeus X4. It’s a solid model with a lot of dynamics to its assembly so it doesn’t have to be static. 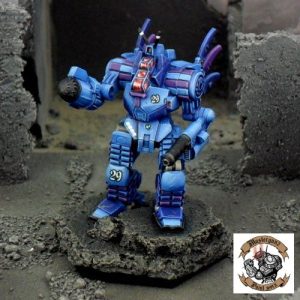 Sean: What parts of BattleTech do you play? Perhaps a better question, what haven’t you played?

Mastergunz: I’ve played all the computer and console games, tabletop (both hex sheet and miniature rules) and little bit of Alpha Strike. I never got into the Dark Ages Clix Game but do own a ton of the models for kit bashing purposes. And of course I was a backer for the recent Kickstarter from Harebrained Schemes and am super excited for the beta to release.

Mastergunz: Yes. Our group leader, Ray Arrastia (who was recently promoted to Assistant Line Developer for BattleTech), is our direct liaison with Catalyst. We have been tasked with working on art for almost all of the books released in the last several years, most recently the Combat Manual: Mercenaries book and Alpha Strike. 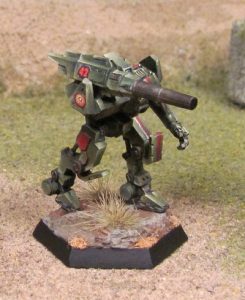 Mastergunz: CamoSpecs is currently a stable of about 15-20 painters, though only 6-10 of us are fairly active. You have to remember that this is a purely voluntary group and so we do what we can as real life allows.

Sean: What’s in store for CamoSpecs in the future?

Mastergunz: The million dollar question. Well I can say we have been working behind the scenes to keep things going via Facebook, mostly. Since we lost our server host in 2015 it has been a task to try and set up something that was as comprehensive and easy to use as the original site. Again, as a fan run volunteer group the time needed to essentially build a new site from the ground up is prohibitive but we are working on something right now. 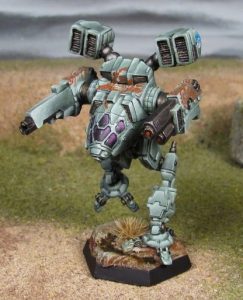 Mastergunz: BattleTech is my first love in miniature wargaming, and so I want to say thanks to all my fellow artist who over the years have pushed me to be better and became very good friends of mine – meeting up at cons and such. I can honestly say I would not be the artist I am today if not for their constructive criticism over the years and seeing the stuff they were turning out and making me say to myself “I want to learn to do that technique!”.

Shameless self plug time! To see some of my more recent BattleTech work (as well as not BattleTech) you can visit my painting page, Mastergunz Paint Worx, on Facebook and YouTube.

Also, some of my fellow CSO artist have a pages as well: “Captain of the Watch” Ed Smith on his Facebook page, and “B1BFlyer” Ryan Peterson runs a YouTube channel for CSO with lots of very cool tutorial videos up.

Incredible thanks to Mastergunz for agreeing to sit down with us. Tune in next time for more Community Outreach!