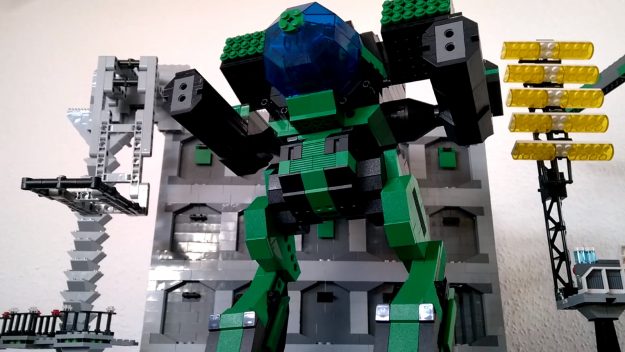 Welcome to another edition of Community Outreach! For the first interview of the year, I reached out to Dolgfer Roshak, of the German Jade Falcon Clan. He’s been posting his Lego BattleMech build videos for years, and I wanted to know how many Lego ‘Mechs adorn his walls (spoiler: it’s a lot). I’ve personally always loved Lego, and the only thing that prevents me from buying a whole bunch of random bricks to build my own ‘Mechs is my complete lack of space. And time. And money. Sigh.

Sarna (Sean): Who are you? Briefly introduce yourself.

CJF Dolgfer Roshak: My name is Dolgfer Roshak and I am a member of the 5th Falcon Dragoons (German Clan Jade Falcon). I earned my Bloodname “Roshak” during a Trial of Bloodright performed in Mechwarrior Online. You have access to the ROM files using the following link.

On a side note, I had some luck in the first and second duel, as I was the hunter in that Trial. Both Bullbor as well as Darius are more at home in heavy and assault BattleMechs.

Sarna: What made you want to start making Lego BattleMechs?

Dolgfer: Well, you can find several Lego Mecha-like videos on YouTube, but none really for BattleTech. I wanted to close that gap. In addition, now I get to have a very nice Lego ‘Mech Hanger full of BattleMechs.

Dolgfer: I started my YouTube channel on January 02, 2014. I gained my first experience with videos by capturing drops in MechWarrior Online.

My “Birth of a Battle Mech Series” started two years later. I uploaded my first episode on April 02, 2016. At the time, I started with the speed build technique. Now I am using mainly the stop motion picture technique to complete my videos.

Sarna: When did you get into BattleTech?

Dolgfer: My first memory of BattleTech is Mechwarrior 2 (ah, the good old times…).

Dolgfer: Uh, difficult question. If I had to choose one, then it would be the Mad Dog followed up by the Urbanmech X)

Sarna: What parts of BattleTech do you play? Perhaps a better question, what HAVEN’T you played?

Sarna: How do you go about creating each BattleMech? Do you do it by hand? Is there software that you use to help make each model? Or are you going off designs already on the internet?

Dolgfer: My starting point is usually BrickCommander.com. Here, there are several designs available for download. Most of them are designed by a guy named Primus, but some of them are also designed by Peer Risch, Ron Perovich, Gordon Hundeby, David Kerber, and Pablo Gómez-Albarracín. The designs are free to download (the software is also free). In each of my videos, you will see a reference to Primus and BrickCommander.com.

With the software (I personally use LDraw) you can generate a parts list. Knowing the parts list (partly with outdated Lego part numbers) makes it a lot easier to prepare a prototype BattleMech. I order my parts from different sellers listed at BrickLink.com. The difficulty is to get the Lego bricks in the colors you want (maybe they are rare or expensive, or they are not available in the color you like). The next challenge is the design of the BattleMech, as you do not know if the ‘Mech will stand solid. At BrickCommander.com you will find the remark “Please be aware that some of the larger Clan ‘Mechs have never been built with ‘real’ Lego before and may require adjustments for weight and balance (examples being the Blood Asp, Stone Rhino, Turkina) when created with physical Lego bricks.”

As soon as the prototype is ready, I replace bricks in colors I like (ie. the final paint job of the BattleMech). It might become necessary to adjust bricks in order to get the color scheme right. In addition, I might modify sections (e.g. for a solid standing or adding a pilot or a cockpit, etc.). Finally, I will prepare the stop motion build up.

Sarna: How long does it take to create each video? I’ve been told that stop-motion can be a labor-intensive process.

Dolgfer: Ah, that is a tricky question.

The preliminary Lego process takes something between 1 and 2 hours. Preparing a prototype build takes another 1 or 2 hours, depending on the number of bricks I use. The final coloring and modifications could take some time. I would say, something between 2 and 4 hours (and possibly longer for larger models, of course).

The final stop motion recording could take anywhere from 8 to 16 hours, again depending on the number of bricks. Episode 33 (Ares) was a real challenge with 4,000 to 5,000 bricks. I really cannot remember the time needed for this one.

Sarna: If you had to guess, how many Lego pieces do you own? How much do you think you might spend on Lego in a year?

Dolgfer: I really do not know, how many bricks I own. But let us see if we could make a short breakdown of my Birth of a BattleMech Series:

If I have summed up all the numbers correctly, round about 47,450 Lego bricks. My average purchase price for one brick is round about 0.10 Euros.

Sarna: How hard is it to keep ‘Mechs to the appropriate scale? Do the little Lego guys make it easier or harder?

Sarna: Do you keep every ‘Mech model you make? Or do they eventually get retired and turned into other models?

Dolgfer: I keep them. So, space is an issue X)

I need them also for other projects. One of my long-time projects is a recreation of the Mechwarrior 3 intro. And I’ve always had a dream of playing a tabletop game with Lego ‘Mechs.

Sarna: You’ve mentioned your “‘Mech Hanger” a few times--just where exactly do you keep all these ‘Mechs?

Dolgfer: My “’Mech Hanger” is at the moment a big shelf, desk, and the wall.

Sarna: What’s the hardest part about making ‘Mechs out of Lego?

Dolgfer: Finding the right color for the whole BattleMech.

Sarna: Then why is it always green? (I notice all your ‘Mechs are green.)

Dolgfer: As a member of Clan Jade Falcon I use of course green. In addition, I also use mainly black and dark bluish grey.

Sarna: Oh, haha, I get it. In that case, what ‘Mech might you make next?

Dolgfer: You can actually see it in my latest video. On a side note, this building consists of around 1,900 bricks.

Thank you, Dolgfer, for this fascinating look at Lego BattleMechs. I never knew there was quite this much crossover between Lego and BattleTech. Perhaps this will inspire other BattleTech fans (with a lot of shelf space, of course) to invest in their own Lego BattleMech hangers.