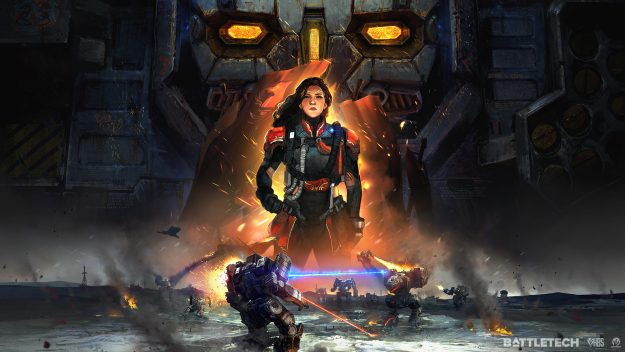 Hairbrained’s BATTLETECH is still a masterpiece and I recommend anyone with a personal computer purchase it. My recent playthrough of the game has convinced me of that more than ever. But what if you wanted to experience BATTLETECH’s story without playing the game? Maybe you just don’t have the time, or maybe you just don’t have a gaming computer. Well, you could just watch a Let’s Play on YouTube or something, or you could play the entire game on tabletop.

Riley Centrella, or Magistrex Centrella as she’s also known, has painstakingly translated every main campaign mission from HBS’s BATTLETECH and turned it into a sequence of 16 tabletop BattleTech maps that can be played in MegaMek, Roll20, MegaMekLab, or your preferred digital tabletop of choice. And best of all, it’s free to download over on the Magistrex’s Patreon.

To get the lowdown on this massive conversion project, I reached out to Lady Centrella for the scoop.

Sarna (Sean): Good evening, Magestrix. My name is Sean, and I’m the Sarna news writer. A certain mercenary suggested I do a piece on your recently-released translation of the Aurigan Restoration campaign from HBS’s BATTLETECH to the tabletop, and I was wondering if that’s something you’d like to talk about?

Riley Centrella: Howdy doodles. I don’t mind talking about it. 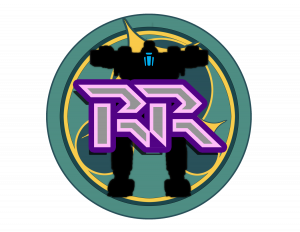 Sarna: Oswald specifically showed me the post where you translated each campaign mission from BATTLETECH into what appears to be something you could use with MegaMek, am I right?

Riley Centrella: I did generate maps for it too, which can be loaded up on MegaMekLab, so I think it’s playable there as well if you can load up all the correct units and stuff.

It’s mostly geared for tabletop, or digital use in places like Roll20, though. I included record sheets with it that previously weren’t available so there are a few components to it.
And I recently released a similar one for the Heavy Metal DLC campaign.

Sarna: Very cool! Most of the ‘Mechs in the game are canon, so not much else is needed besides the maps and maybe some scripted speeches. I know there’s an Aurigan Reach sourcebook from Catalyst, but I haven’t read it. Your work doesn’t really touch that, right?

And yeah that’s different; it did include a few record sheets too but it offers an entirely different campaign which I believe takes place after the events of the Restoration campaign.

Sarna: That tracks with what I’ve read. So how did you create the maps?

Sarna: And how long did that take? For all… 20 some odd maps?

Riley Centrella: 16 maps total; one for each operation, although one is really just a variation because two of the operations take place in the same area at different times. But… man, I don’t remember the maps specifically. The entire project… I think it was 3-4 months. I played through the campaign again myself first, took notes along the way regarding OpFors, the maps, the dialogue, every little thing. Then came the actual conversion to try and balance it for the tabletop, and then after came the record sheets and finally maps before I put everything together, proofread it a couple of times, did some playtesting, and finally unleashed it.

Sarna: Gosh, that’s a long-ass time. Well, we’ll definitely need to get the word out so your efforts can be enjoyed by more BattleTech fans.

Riley Centrella: I always feel like I don’t really do that much. Like I see the creators who have these amazing Patreons with original artwork and things of that nature and then look at my stuff, which is mostly just homegrown record sheets and hand-typed PDFs of scenarios and such. But I mean, if people enjoy it, that’s enough for me.

Sarna: How drastic were the differences between the actual game and your tabletop translation?

Riley Centrella: I tried to keep the OpFor strength about the same as possible as I could, to give it a more authentic feel. That’s where the gunnery and piloting scores on the tabletop come in handy; those alone can help balance sometimes. Here and there though I did have to change units because the tabletop can be so very different from the video game; whereas a full assault lance might have a great chance in the game, they might still get wrecked on the tabletop, if say, there’s a fleet of SRM Carriers waiting for them.

So overall, I’d say the changes were minor and only made where necessary, mostly for balance. I wanted to keep the feel of the original as much as possible. 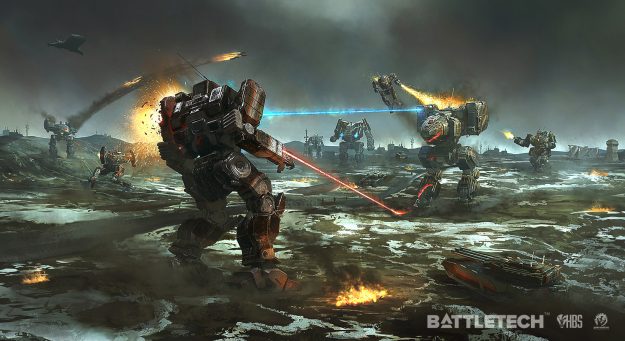 Sarna: How’d you get into BattleTech?

Riley Centrella: Believe it or not, because of that video game. I’ve always sort of liked ‘Mechs you could customize like the old Armored Core series on PS1 and PS2. Then I saw the HBS game and thought that looks right up my alley, so I grabbed it in 2018 after it came out and immediately fell in love. With the game, the lore, the history of BattleTech. I’ve been hooked ever since.

Sarna: HBS’s BATTLETECH is probably the best BattleTech game out there right now, to be quite honest. The story of BATTLETECH is great too since it fits into the wider lore nicely. Armored Core is a great series too. Tough as nails though.

How much else of BattleTech have you experienced? In terms of computer games, tabletop, novels, etc.

Riley Centrella: I don’t have MechWarrior 5 yet but it’s on my Steam wishlist. Haven’t experienced any other games yet, although I have been researching MechWarrior 2: Mercenaries. It was the most requested project for a tabletop conversion, so I’ve been watching YouTube playthroughs of that, reading the mission transcripts, and more for research.

I’ve started reading the novels but I’m only on the Gray Death Legion saga so I have a long way to go. Most of what I learn actually comes from Sarna. I did manage to hop onto the Kickstarter in time so I’ve got plenty of goodies from that, too.

Sarna: Sarna is of course a delightful resource, but don’t forget the sourcebooks too. MechWarrior 2: Mercs is probably one of the most beloved games in the series. It really got everything right–well, everything except for autocannon damage values for some reason.

Riley Centrella: Yeah, I’ve learned about the cult status of MW2: Mercs, so I really hope my conversion goes over well. It’s probably my most ambitious conversion project so far.

Sarna: And now the all-important question: what’s your favorite ‘Mech? 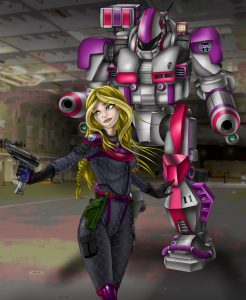 Lady Centrella and her Hammerhands

Riley Centrella: That’s a really tough question, I have a few I love.

I absolutely adore the Flea. Everyone knows and remembers the Locust, the Wasp, the Stinger, but I feel like the Flea is often forgotten. It’s blazingly fast and has enough weaponry to defend itself easily. On the bigger side of things, I guess you could call me a hipster, because I absolutely love the Hammerhands. It’s what inspired the Warhammer and is oft-forgotten or overlooked.

Into the later eras…likely because of my love for the Magistracy, I also have a lot of love for the Penthesilea.

Sarna: I actually had to look that last one up.

Riley Centrella: Most do!

Sarna: I’m going to catch hell for this, but I do love the hipster ‘Mechs. Be unique, don’t just be another Marauder fan.

Riley Centrella: Exactly why I keep loving my old Hammerhands.

Sarna: Anything else you’d like to add? Feel free to get shamelessly self promot-y.

Riley Centrella: A recent addition to the Discord server; Design Challenges. Basically I offer up a challenge to design a mech or combat vehicle with certain specifications, and then the winner gets a prize. The first one is a $10 gift card to Fortress Miniatures & Games.

Thanks so much for sitting down to chat with me, Lady Centrella! If you’d like to download the BATTLETECH scenario pack for your next tabletop game, head on over to her Patreon for the free download link. She’s also got a Discord channel if you’d like to drop in and talk all things BattleTech.