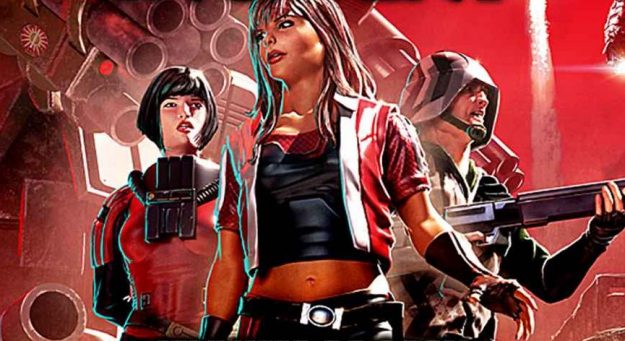 Welcome to another episode of Community Outreach! The famous and handsome owner of Sarna.net recently went down to Gen Con and had a chance to speak with Jennifer Brozek, author of The Nellus Academy Incident as well as the upcoming Rogue Trilogy of YA BattleTech novels. Using his rugged good looks and amazing charm he somehow convinced her to agree to an interview, which must’ve made the fact the interview was done by me all the more disappointing.

Disappointment aside, Jennifer brings a new voice to the BattleTech narrative. We chat about how she got roped into writing about giant stompy robots and how important it is to include death in a YA novel. Enjoy!

Sean (Sarna): Let’s go over the whole genesis of The Nellus Academy Incident. How did you get approached to write a BattleTech YA novel?

Jennifer: It was Gen Con a few years ago, just after I’d won the ENnie for Savage Worlds: Shanghai Vampocalypse [which is a fucking amazing title – Sean]. John Helfers introduced me to Jason Schmetzer, the editor in charge of BattleTech: BattleCorps. One of the first things he asked me was “Do you write stories about big, stompy ’Mechs?” I told him no. Then he asked, “Could you crash a ’Mech then write me a story?” That I could do. If I was inspired, I didn’t think I’d ever be. 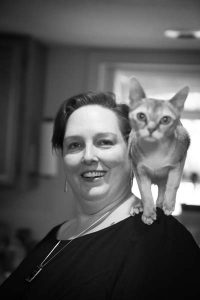 A while later, I had the idea for The Nellus Academy Incident. I proposed it as an ongoing serial for BattleCorps. After some back and forth, The Nellus Academy Incident became a 25-episode serial for the subscription-based service. Once the story was complete, Catalyst Game Labs decided to package the serial up as a novel. They allowed me to polish it, smoothing the transition from serial format to novel.

Sean: Had you ever had any experience with BattleTech before writing The Nellus Academy Incident? Games or fiction?

Jennifer: I’d seen it at many local gaming stores and watched it from time to time. I didn’t play it except for playing in the giant mechanical pods at BattleTech Centers that let you feel like you were actually in the game. As I suck at twitch games, if I ever got a single kill, I felt like I’d won the game.

Sean: What did you think of the BattleTech universe before you got asked to write your story?

Jennifer: In general, I didn’t think about it. I didn’t know the universe. All I knew was what I gleaned from friends as they played their game: the factions were many, the politics detailed, and everyone loved their ’Mechs. I was a Robotech cartoon girl.

All I knew [about BattleTech] was what I gleaned from friends as they played their game: the factions were many, the politics detailed, and everyone loved their ’Mechs.

Jennifer: Obviously, my world has expanded in ways I’d never expected. While my knowledge has changed to be much more detailed, my original impression of BattleTech remains: there are many factions to suit all players, there’s a huge amount of political details to satisfy those who love that kind of fiction/gameplay, and everyone still loves-loves-loves their ’Mechs.

Sean: While I’d say the majority of BattleTech fans love reading about the various militaries of the Inner Sphere, only a few have really experienced military life first hand. How much of Nellus Academy would you say was inspired by your own upbringing? Is the Nellus Academy itself partly based on any real-world academies?

Jennifer: A lot of it was based on my personal experience. I lived on military bases until I was 14. Then I visited bases until I was 18. I had cadet training through my college years. All my friends were military brats or cadets until I was in high school. Civilian kids were largely strange, undisciplined, exotic creatures for a lot of my young life. 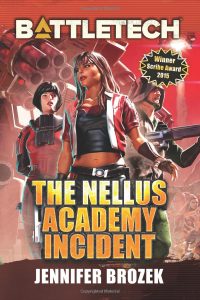 The Nellus Academy itself is not based on a real-world academy. It was built on the real-world stories of cadets I know as well as of students who used to go to boarding schools. The sense and feel of the school came from the schools I used to attend on base.

Sean: Your explanation on how you went about creating ‘Mech battles in Nellus Academy was fantastic and well worth the read for anyone who wants a good idea on how to create accurate ‘Mech fights. In your article, you mentioned being given an “Author Technical Quick Reference Guide” which contained 33 BattleTech machines, but did you perform any additional research for the book?

Jennifer: Ah, that was shorthand for what actually happened on my new YA BattleTech series.

For The Nellus Academy Incident, I looked things up as I went along and pinged my old BattleTech Think Tank for odd, crunchy questions like, “You’re a merc in the Lyran Alliance from a noble family. What kind of antique ballistics hand weapon AKA pistol would you use?”

For the Rogue Academy trilogy (currently being written), I spent days researching the appropriate ’Mechs for the Draconis Combine 7th Ghost Regiment and the Federated Suns border planet of Emporia. I put together a much longer list of ’Mechs and asked my new BattleTech Think Tank which subset of those ’Mechs would be a good fit for what I had in mind. It spawned an email thread I really don’t want to think about.

I finally told my Think Tank what I needed: 8 academy ’Mechs, 10 Emporia ’Mechs, and 12 Draconis Combine ’Mechs. I needed them for the following reasons (…). They basically told me that I had created a good start, but they would take the conversation offline and get back to me. They came back with 33 ’Mechs that would be appropriate in the series, based on my story needs, location, and era. 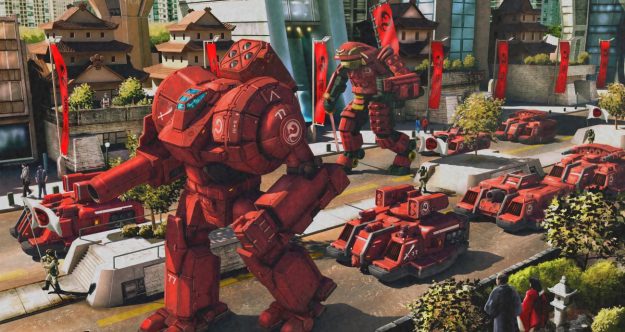 My main Think Tank buddy, Chris Love, is the one who put the “Author Technical Quick Reference Guide” together (complete with ’Mech images and variations) for me and him and my editors, so we would all be on the same page when it came to fact checking, battles, etc… Honestly, it was a CYA maneuver on his part as much as mine. He’s the one who played out the battles for me and knew the gotchas from 25+ years of IP experience.

Note: when you aren’t an IP expert, find one and treat them like gold.

My audience is broad, but I want to make it broader. I want people from all kinds of diverse backgrounds to see themselves in my stories.

Sean: Aye, that it is. We’re a humble bunch here at Sarna.

But back to questions. I think Nellus Academy had the very first canonically gay characters ever featured in a BattleTech novel (and if not, I’m CERTAIN I will be corrected by at least a dozen angry BattleTech fans). How important do you think it is to feature that kind of diversity in writing, either for youth or mature adults?

Jennifer: I don’t know if that is true. There’s a lot of material out there. I can’t verify that one way or the other. However, I think it is incredibly important to feature realistic diverse populations in my writing, whether it be for YA or adult audiences. I work hard to use the correct language for them all. It’s daunting, but it’s worth it.

Sean: I was also VERY surprised (and more than a little heartbroken) when one of those characters died in the book. What made you take that move in the Nellus Academy narrative? Do you think that the subject of death is something that most YA authors should shy away from, or did the gritty nature of the universe seem to make it more acceptable to include?

To a teenager, everything is life or death. Sometimes literally.

Jennifer: (Talking around things so there are no spoilers…) That particular scene was hard for me. I hadn’t wanted that character to die. But, I realized for the main enemy to succeed in his quest to regain the trust of his men, and himself, it had to happen. The story called for it.

As for death in young adult books, YA authors have death in their stories all the time. They have done so since the beginning. To a teenager, everything is life or death. Sometimes literally. When I talked with my local teens, one of their biggest complaints was an author punking out on the death of a character that should have happened.

It’s in middle-grade stories that you need to be a bit more careful. You can’t kill people in the same way. You can turn them to glass or have them fall into an endless chasm, but it isn’t a death in the same way as in a war story. The Nellus Academy Incident was a war story through-and-through.

Sean: To wrap up, what’s in store for the sequel? Is there going to be a crack team of teenage Marik MechWarriors?

Jennifer: Right now, there are no sequels in the works for The Nellus Academy Incident. However, if the stars aligned, I know how the story continues…

There is, though, going to be a brand new YA BattleTech trilogy. It’s called the Rogue Academy trilogy (Iron Dawn, Ghost Hour, Crimson Night), set in 3155. It is a standalone trilogy in the fact that it does not affect the new BattleTech metaplot. It is set on Emporia, a Federated Suns border planet. It’s about an orphaned brother and sister assigned to the Ritza Academy and what they do when the Draconis Combine comes knocking. The first chapter of Iron Dawn is in the back of the 2018 print release of The Nellus Academy Incident. I believe it’s been added to an updated version of the ebook edition. 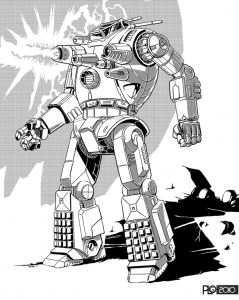 Sean: And most importantly: what’s your favorite ‘Mech?

Jennifer: You know, until I started writing the Rogue Academy trilogy, I would’ve said the Grasshopper for its mobility and heavy weaponry. I like the mix of lasers and missiles.

However, after doing a lot of research for the new trilogy, I’m in love with the Ostsol. I like all the lasers. I know it can have heat problems, but no need to reload is nice. Now, the ECM is where it’s at. Blocking sensors is awesome. It allows for all kinds of shenanigans.

Sean: Thanks again so much for agreeing to this interview, and thanks for writing The Nellus Academy Incident. I found it to be a real page-turner, and easily as gritty as any BattleTech novel I’ve read!

Jennifer: Thank you. I appreciate that. I hope you like the new series as well.

Thanks again to Jennifer for chatting with me! I’m certainly looking forward to her upcoming trilogy, and the rest of you should be too.