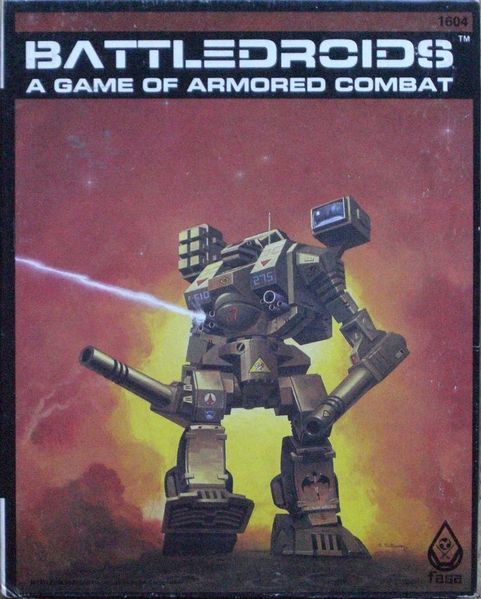 For the tale of how Battledroids would eventually become BattleTech we must head back to the hazy days of 1984. FASA had just released their first successful table top RPG in Star Trek, and were eager to expand their product line. Then, at a hobby and trade show, Jordan and company came across a vendor importing miniature model kits of giant robots from out of production anime such as Macross and Crusher Joe. Having overestimated their appeal in Japan, the model kits were being dumped on the North American market, allowing FASA to pick them up for a steal. Thus, BattleTech can trace its artistic origins to old anime (which would eventually result in the “Unseen” ‘Mechs). FASA reached out to those Japanese companies for licensing of the imagery, and the original Battledroids boardgame was born.

The combination of striking and exotic art, war machine romanticism, and epic history would prove to be a winning formula

While the art was licensed from anime, the game’s design and story were all American. Jordan had the idea of removing the mystical element of the anime robots and replacing it with a more classic affection that a World War Two pilot would have for their fighter plane or tank. Patrick Larkin and Steve Peterson would come up with the back story of a Star League, Great Houses, Succession Wars and centuries of warfare. The combination of striking and exotic art, war machine romanticism, and epic history would prove to be a winning formula, eventually producing a much larger universe than the original board game intended.

But it wouldn’t be BattleTech without legal issues. After 5000 units in sales, Lucas Arts sent a letter to FASA explaining that the term “droid” was trademarked to the huge Star Wars franchise, and demanded that FASA stop using it in their games. Explaining in an interview, Weissman contended the word “droid” predates Star Wars, however would eventually back down and change Battledroids as not only could FASA simply not afford a legal battle with a much larger company, but FASA was also in negotiation with Lucas Arts to produce a line of Star Wars board games. Deciding that discretion was the better part of valour in the face of a double financial whammy, Battledroids became BattleTech in its 2nd edition printing. 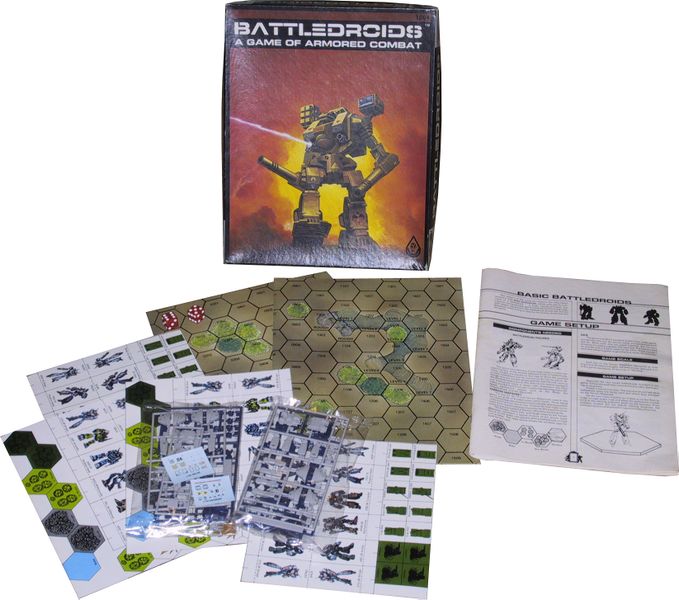 The contents of a Battledroids box would look mostly similar to earlier BattleTech printings, but have a few key differences. First, only 10 ‘Mechs were present (the Stinger, Shadow Hawk, Archer, Griffin, Warhammer, Phoenix Hawk, Marauder, Crusader, Wasp, and Rifleman). Next, there were actually three sets of rules depending on how into the game mechanics you wanted to get. Basic rules would greatly simplify the game, not even taking into account differing ‘Mech loadouts and armor, or even torso twisting. Advanced rules would add much of the board game’s rules back in, but leave out a few complications like critical hits and pilot skill rolls. Expert rules largely resemble the rules of today, with some differences in ‘Mech construction (Jump Jets only weighed a half a ton at any ‘Mech size, for example).

And of course, you got 2 little plastic models of a Griffin and Shadow Hawk – the very models that Weissman picked up from that anime vendor and inspired it all.

We really should thank Lucas Arts for forcing the game to become BattleTech. The term would eventually produce BattleMech, giving us the word ‘Mech we all know and love.

And by the way; ‘Mech is trademarked. Just incase Star Wars wanted to use it.

2 thoughts on “Did You Know? BattleTech Was Originally Called BattleDroids”