Welcome to another part in Sarna’s retrospective series of old BattleTech video games.

Last time we took a look at the original MechWarrior and saw how it would set the stage for the breakout ‘Mech classic, MechWarrior 2: 31st Century Combat. But there was a lot of work to go from the pixelated and basic graphics of MechWarrior to the fully 3D environments of MechWarrior 2. So much work that it actually took two tries to get it right.

I speak of the long-forgotten first attempt at a MechWarrior sequel known as MechWarrior 2: The Clans.

"Mechwarrior 2: The Clans" Trailer
Watch this video on YouTube.

That’s right: before we had MechWarrior 2: 31st Century Combat, Activision tried their hands at a MechWarrior sequel that had way more than just Clan Wolf and Clan Jade Falcon going at it for bragging rights.

We’ll get to that in a bit, but first, let’s recap what happened after the original MechWarrior hit store shelves in 1989. To summarize, the original developer Dynamix got bought by Sierra On-Line and used their tech to create Earthsiege, and then later Tribes, and then later still go bankrupt. That meant that the original game engine left with Dynamix, leaving Activision to start from square one.

Which is exactly what they did starting in 1992. Activision gave the game an ambitious release date of sometime in 1993, which meant that the development team had just over a year to go from nothing to a full 3D ‘Mech simulator.

As any game developer can tell you, that’s not enough time. Especially for a team of roughly a dozen over-worked and underpaid people.

So anyway, 1993 came and went without much of a game, but Activision did put out a playable demo that showed just exactly where MechWarrior 2 was headed. What we get is a strange amalgamation of ‘Mech models that would become familiar in the real MechWarrior 2: 31st Century Combat and the old bitmap-style cockpit that was the mainstay of the original MechWarrior.

You can see where the demo was going with a lot of the cockpit stuff: the altimeter, bearing indicator, and torso-twist indicator look and feel exactly as they do in the final MechWarrior 2. The radar now sat dead center in the screen, while the exterior portion of the cockpit would bounce around with the ‘Mechs movement.

That exterior skeletal portion, as well as the green letters of the HUD, would be the only things that survive into the finished MW2. That and the overall look of the models, which bear an uncanny resemblance to the ‘Mechs we know and love.

MechWarrior 2 The Clans Demo Gameplay
Watch this video on YouTube.

However, there were a lot of limitations to the demo. First, you couldn’t get critical hits so you never had to worry about losing any of your components. Second, you couldn’t lose limbs which meant that losing an arm didn’t mean a whole lot. Instead, you just kept shooting until your armor and internal structure depleted, at which point you exploded.

Besides the whole fully 3D game thing, Activision had some big plans for MechWarrior 2: The Clans. Originally there were going to be 6 clans total, including Can Wolf, Jade Falcon, Smoke Jaguar, Nova Cat, Ghost Bear, and Steel Viper. There would also be 8-player multiplayer free-for-alls where everyone could enjoy a good ‘ol Grand Melee whenever they wanted. For its time, the game was really forward thinking.

So what happened to MechWarrior 2: The Clans? Perhaps in a sign of things to come, Activision’s marketing team and executives kept pushing for a finished game that was nowhere near ready to be published. According to an ancient article from Local Ditch, there were internal disputes over when to release as well as some legally questionable arguments between the game’s producer Kelly Zmak and Activision higher-ups. And even though the team had 3 programmers officially, most of the work on the game’s engine was being done by one guy: Eric Peterson.

Eric would describe in his personal blog working 14-16 hour days on MechWarrior 2, although he admitted that had as much to do with loving the work as it did with any pressure from Activision. Eric would also be the only person on the original MW2 team to be credited on the final version of MechWarrior 2: 31st Century Combat, with the second team’s producer explaining that much of the final game’s engine could be chalked up to Eric’s work.

By 1994, the original team working on MechWarrior 2: The Clans had all left Activision for greener pastures. At the time, it looked like Activision would kill the game entirely, but a guy named Tim Morten proved instrumental in convincing the bigwigs in charge to continue development. Tim would build on Eric’s original designs and eventually finish the game and release it as MechWarrior 2: 31st Century Combat in 1995.

The biggest differences between what would have been The Clans and MW2: 31st Century Combat mostly boiled down the story. The Clans was more of a random mission generator attached to a multiplayer game, while the MW2 that got released offered a single player campaign set during the Refusal War between Clan Wolf and Clan Jade Falcon. It also meant that the other Clans would have to take a bit of a backseat (at least until the first expansion came along). 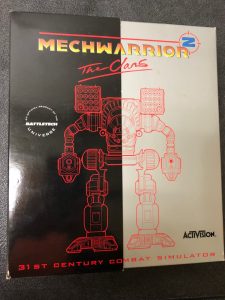 Technologically, MW2: 31st Century Combat had two big improvements over The Clans: dynamic lighting and a fully 3D environment. Lighting effects from explosions and even a moving sun would change the shadows and colors that the player sees to be far more realistic, while the 3D environment got rid of all the old bitmaps that made the game seem a lot more like the original MechWarrior than a true sequel.

We’ll take a bigger look at the real MechWarrior 2 next time, so stay tuned.

Once again, a big shout out to Chris Chapman who can be considered an official BattleTech games historian at this point. He also sent me an entire scan of the original The Clans promo box, which Activision sent out a little prematurely but Chris somehow still got his hands on one.