Welcome back to Sarna’s retrospective on classic BattleTech video games! I’ll be your host as we look back on some of the games that made BattleTech and MechWarrior the storied franchises they are today.

We’re going to switch things up a bit due to some… we’ll call it “negative feedback” that was given during my last foray into the Crescent Hawks Inception. I understand that some of these classic games might not quite be the shining jewel of digital accomplishment when compared to more modern ‘Mech games, but at the time they were real accomplishments that should be respected for the stepping stones they were.

That and nobody likes having their childhoods shit on, no matter how awful the sound effects were.

So instead of a pseudo-review where I start tossing out crazy things like numbered scales, we’re going to just look at the game’s history and see what it contributed towards modern MechWarrior titles. Starting with the original first-person ‘Mech combat simulator, MechWarrior. 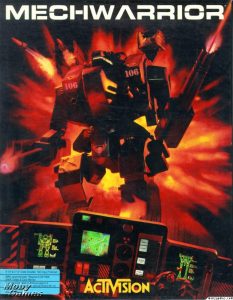 MechWarrior was originally published in 1989 by a little company called Activision--you might know them as the massive game corporation that’s slowly eating Blizzard Entertainment alive right before our very eyes. Back in the day, the evils of microtransactions and rushed development cycles weren’t nearly as prevalent, so Activision was just another little fish in the nascent pond of PC gaming.

While Activision published the game, it was created by a humble team of 17 dudes working at Dynamix Inc. Dynamix would eventually be bought-out by Sierra On-Line, creating both Tribes and Earthsiege as their subsidiary, but back in 1989, they were known for creating flight simulators like A-10 Tank Killer, F-14 Tomcat, Arctic Fox, and Red Baron.

However, MechWarrior is only half about the giant stompy robot combat. Much of the game still harkens back to the text adventure style of gameplay exemplified in the prior Crescent Hawks PC games, with the player going from planet to planet seeking fortune and machinery as they build up the Blazing Aces mercenary company.

Almost all of the modern BattleTech games, including BattleTech and the upcoming MechWarrior 5: Mercenaries, can thank the original MechWarrior for the whole “mercenary commander” gameplay loop. 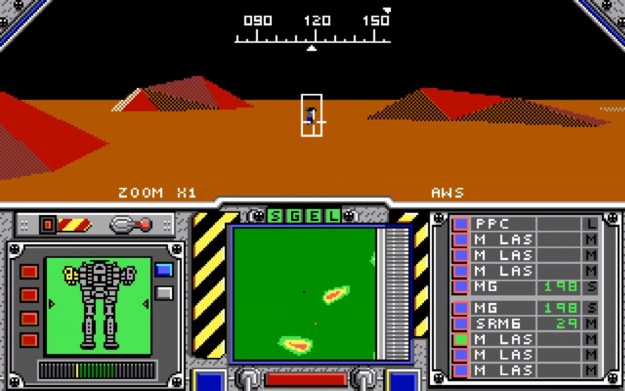 In MechWarrior, you play as Gideon Braver, a disgraced Davion noble who’s forced to flee his home planet due to some inter-familial intrigue (ie. a bunch of ‘Mechs showed up and killed everyone). Since Braver has some cash and an old Jenner just lying around, he decides to take up the mercenary mantle and start making some green (C-Bills, that is). Braver will then journey all over the Inner Sphere, building up his company’s strength and meeting such notable BattleTech personalities as Natasha Kerensky and her Black Widow Company.

But Braver never really forgets his heritage and continues to pursue his family’s killers even as he chases after the almighty C-Bill and a better set of robot legs. It’s during these text-heavy portions of the game where the player can branch into several different endings, depending on what the player decides to do. 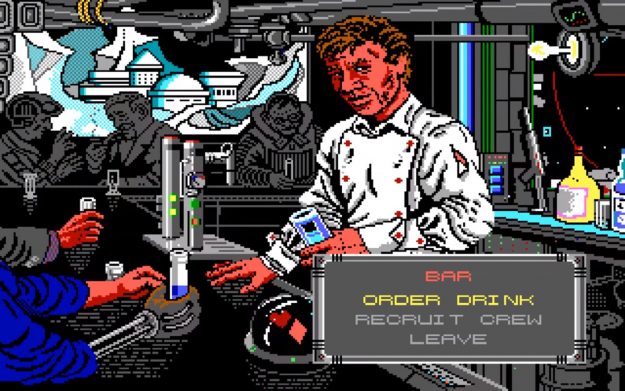 For the text portions of the game, you can see some very significant improvements in MechWarrior over Crescent Hawks Inception--most notably in the art. Full-screen, vibrantly colored pixel images add a lot more atmosphere, and additional music plays during certain areas of exploration (usually in the bar).

Sound effects are also improved, although still a far cry from what would be heard in the sequel, MechWarrior 2.

There are eight ‘Mechs the player can purchase (salvage is represented only in C-Bills and not in the burnt-out wrecks of your foes) including the Locust, Jenner, Phoenix Hawk, Shadow Hawk, Rifleman, Warhammer, Marauder, and BattleMaster. The Scorpion, Atlas, and Griffin are also mentioned but aren’t pilotable. Since the tonnage tops out at the BattleMaster and Marauder, this is the main reason why these two ‘Mechs still have reputations amongst the BattleTech faithful as being scary as all get out. 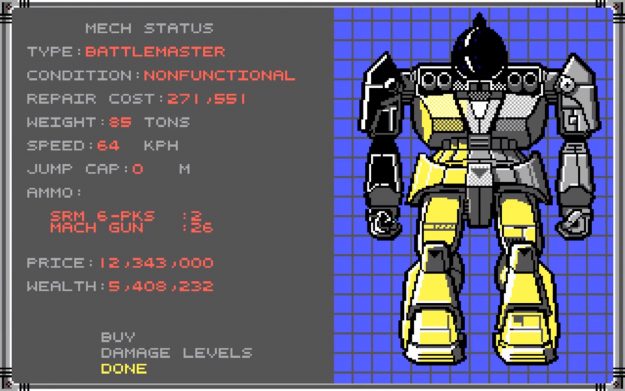 As I mentioned before, much of MechWarrior’s combat will appear the same as Abrams Battle Tank as they use very similar engines. Terrain appears as large polygons while the ‘Mechs themselves appear as smaller, more colorful objects. The player can zoom-in to get a better view of their foes and engage with long-range weapons or wait for them to close to use things like lasers and SRMs.

There’s no denying that the combat is pretty basic, but you can see how MechWarrior created the template for all other games to follow. A giant radar dominates the center screen with heat and jump jet gauges to either side. Weapons status are all listed in the lower right corner, while enemy target data appears in the lower right. That’s all still essentially the same in MechWarrior Online, with the minor tweak of enemy combat data appearing in the upper right corner and the player’s own ‘Mech’s status appearing in the lower left.

(Things would get completely swapped around in MechWarrior 2, but we’ll dig into that later.) 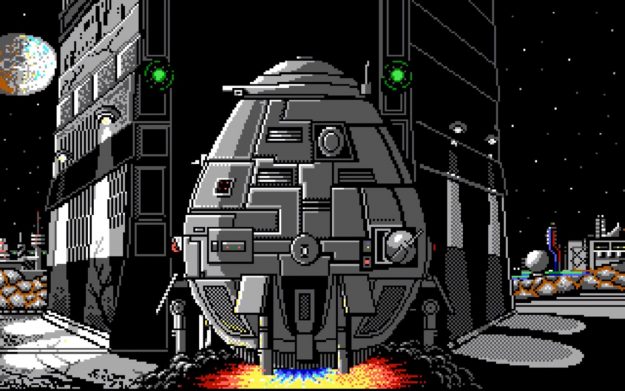 With Dynamix doing such a great job of mixing the classic text adventure elements with a more modern 3D simulator, it’s almost sad that Activision had to go it alone for the sequel, MechWarrior 2: 31st Century Combat. But as I said before, Dynamix (and all their proprietary 3D engines) got picked up by Sierra On-Line, and that was it for them.

If you want a great example of what a MechWarrior 2 made by Dynamix would have looked like, check out Earthsiege. It’s an interesting alternative view of what MechWarrior could have been rather than what it turned out to be.

Earthsiege: playthrough pt. 01 of 20
Watch this video on YouTube.

With incredible thanks to Chris Chapman who provided a lot of invaluable information on Dynamix and MechWarrior’s development.

5 thoughts on “Did You Know? – Retro BattleTech Games – MechWarrior”