Nothing quite beats the feeling of sitting down around a big table with your friends and spending an evening playing tabletop BattleTech. The sound of rattling dice, the camaraderie, the drinking (at least when I do it), and the inevitable hollering that follows when someone bumps into the table and knocks over everyone’s ‘Mechs. Priceless.

Sadly this option isn’t available to everyone. Sometimes there’s just not enough people around to get a good playgroup going. For those ‘Mech heads there’s always been MegaMek to get there giant stompy robot fix, but the virtual world has never really lived up to the meat world in terms of delivering the authentic games night experience.

That remained the case until 2015, when a hitherto PC game got some much needed giant robot love.

Tabletop Simulator is a game available for download on Steam (or Humble Store or- y’know what? Just go to their website for the full list) that’s really not much of a game at all. It’s more like a physics sandbox designed to mimic real life as much as possible. The game comes with a few classic board games (like checkers, pachisi, and go), but in a terrible oversight from the designers, it did not ship with BattleTech as an available game to play.

Lucky for us, Tabletop Simulator is easily modified by enterprising individuals with a little modeling experience and a love of the game.

“When I heard of Tabletop Simulator I found out that there was nothing on the Workshop for BattleTech.”

“I’ve been playing BattleTech since… well, yeah I started playing MechWarrior since I was, like, you know, three,” says Steam user Turduckens, who was the first to see the potential for Tabletop Simulator and its glaring omission of BattleTech. “When I heard of Tabletop Simulator I found out that there was nothing on the Workshop for BattleTech. And I think the game had only come out for, like, a year or so, so then I decided I’d get to work on that.”

Bringing BattleTech to Tabletop Simulator wasn’t entirely a walk in the park. Because the game has almost no scripting outside of rolling dice, everything that exists in real life has to be made to work in game. That means hex maps, ‘Mech models, even the Record Sheets had to be recreated by hand to work in Tabletop.

“The hardest thing was originally trying to find good sources for models. Like, there was always the paper models, which a lot of the times were MechWarrior 4 and 3 models, which I don’t know what magic they used to rip those from the game because I could not figure it out.” 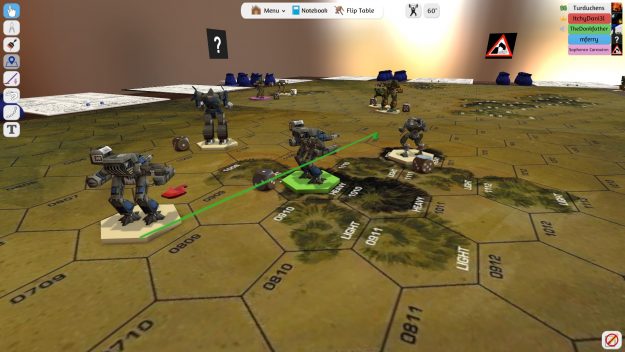 And of course there were some mishaps along the way. When developing the original hex boards for use in Tabletop, he ran into a few minor issues. “I didn’t know how to use the hexagonal snap at the time so all of my hexes were slightly uneven and disjointed, haha!”

Soon a community of user created content would develop around the project, culminating in the BattleTech Collection page under the Tabletop Simulator Workshop. Turduckens curates the page where he compiles and collates all the latest and greatest in BattleTech mods for Tabletop Simulator.

And there is quite a lot available. From hundreds of Record Sheets from Steam user Insaniac99, to a full fledged campaign from Steam user WuSu. There’s even other BattleTech games like the TCG and Alpha Strike. 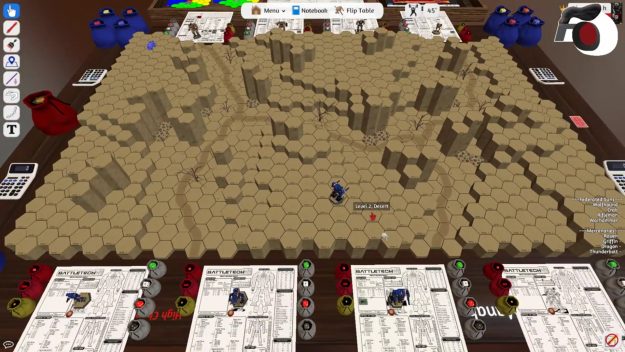 Getting started in BattleTech Tabletop Simulator is easier than ever, with many user created quick-start scenarios. Turduckens has his hosted on Nexus called Davion vs. Mercenaries, a well balanced 4v4 scenario that pits a Federated Suns lance against a mercenary lance of classic 3025 era Battlemechs. For more experienced users, there’s more comprehensive collections such as Steam user ItchyDani3l’s Skirmish, which gives players dozens of ‘Mechs to choose from, both Clan and Inner Sphere.

Best of all, Tabletop Simulator has recently gotten VR support, adding a level of immersion never before seen to simulated BattleTech. Turduckens sadly didn’t have a working VR headset to test out his designs, but he did have a friend do it for him.

“One of my favorite moments when I was making this stuff was my friend joined and he had his VR headset on, and it shows you in-game exactly where his head is and where his arms are and he was, like, picking stuff up and he was looking at these ‘Mech models I imported and it was just so cool.”

It may be soon that the virtual world will be the space of choice for tabletop BattleTech fans. 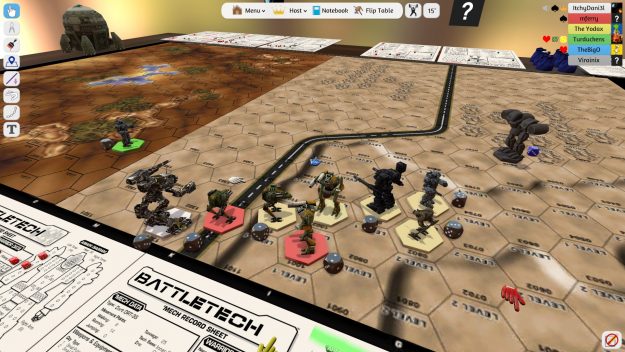 For those looking to find Tabletop Simulator players, Turduckens recommends Clan Ghoul as a place to start. “They were so fun to play with, oh my god. Our gamemaster was running, like, eight ‘Mechs at a time versus us, and he was such a good host.”

Of course, we couldn’t leave Turduckens without asking him his favorite ‘Mech. “Oh, I’d have to say the Awesome. Yeah, I love ‘Mechs that can peek out and do a crap-ton of damage and then just go back into cover and cool off.”

6 thoughts on “Did You Know? Tabletop Simulator has BattleTech in VR”