Have you played Alpha Strike yet? At first glance, it may be a bit too much of a shift away from BattleTech for some established players to be able to handle. Sure, it simplifies, abstracts, and condenses everything about our favorite game of stompy ‘Mechs and heavy metal mayhem into a neat little package that can be learned and demoed in about an hour.

Let’s stop and think on that just for a minute. An hour? One hour!?

If you’ve ever played BattleTech, and I’m assuming most of you have at one point, then you will know what an amazing concept it is to think that you can stomp around in your favorite ‘Mechs, beat your opponent into a mangled pulp, and then still be home in time for dinner.

I think this is what makes Alpha Strike most appealing, and my gaming group agrees. We met this past weekend to play some 150 point games of Alpha Strike in order to get people more familiar with the rules in the hopes that we can do bigger games soon.

The day was a rousing success all around. We started playing at noon, and by 4 o’clock all of us had played three (3) full games of Alpha Strike! Below are a few pictures that I managed to snap during the day. 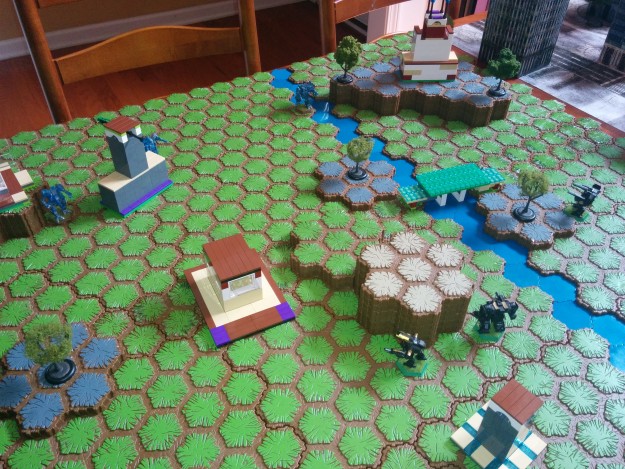 Here we see the XII Hastati Sentinels facing off against Clan Coyote on our Heroscape/Lego board. Buildings are constructed from Legos that I got for Christmas. (Yes, 31 years old, and my wife got me Legos for Christmas. I am happy with her choices.) The board was really fun to play on, and Heroscape doubles as a BattleTech board using hexes or as an Alpha Strike board. Very versatile option for gaming. 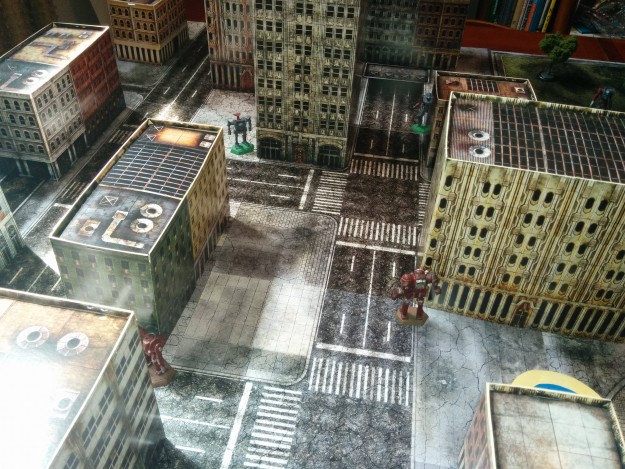 On the opposite board, a Lance from the 5th Sword of Light faces off against an ancient enemy, the 17th Avalon Hussars. This table is great for a running battle, helped by having jump jets. The terrain is from the game Dropzone Commander, from the Ruined Cityscape set. I was really lucky to snag this set a few months ago from an online store, but the terrain has become very difficult to find. 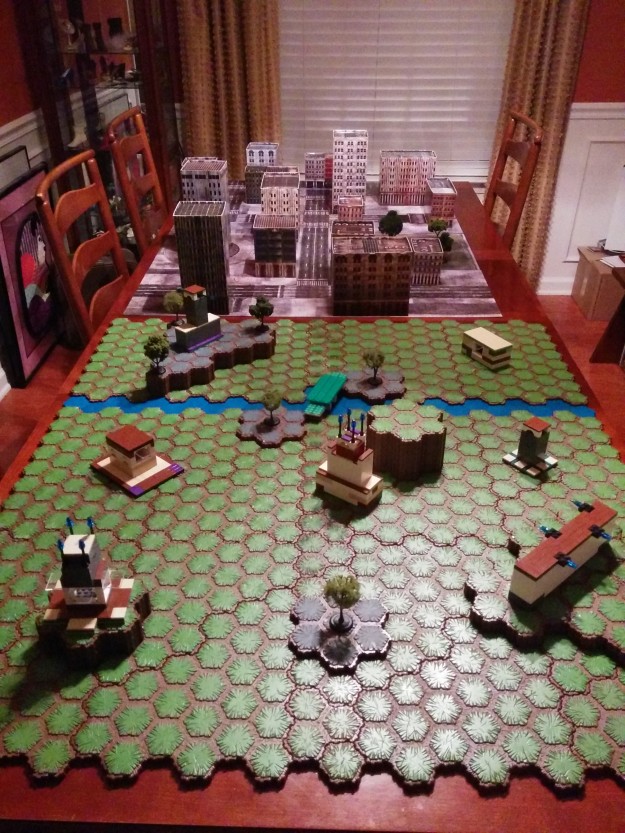 This is a shot I took the night before when I finished setting up the terrain. It took me about an hour of fiddling with the Heroscape board to get it the way I liked it, and the Ruined City set up in about 5 mins. Another reason to really like Alpha Strike is that it lets you easily play with just about any terrain from any other game you play. That can be a huge advantage if you don’t have many map sheets for BattleTech or just want the terrain to be more tactile and visual.

The day was a lot of fun for everyone. While there are a couple of us that still want to play regular BattleTech from time to time, I think there are better opportunities to grow the group, and maybe even move some of our game days into our FLGS soon. It’s a process, and I think Alpha Strike is a great tool in any arsenal for getting people into the world of BattleTech and to get older players to come back for a new look.

What about your gaming group? Have you tried out Alpha Strike? Is it your main way of playing BattleTech?

Let us know what your group is up to in the comments section.

To check out Alpha Strike, you can order it in either PDF or printed from the links below.