In BattleTech mathematics, a ‘Mech with standard internal structure weighs ten percent of its total mass. For instance, the internals of a Succession War-era Atlas weighs ten tons. Official rules anyway. Regardless, we very well might be on our way to having artificial muscle as strong as myomer.

The University of Singapore’s Faculty of Engineering has developed electrically triggered material that can extend five times its original length and lift loads up to eighty times its own weight. Dr. Adrian Koh of NUS’ Engineering Science Program and a team of four have been working on the new pseudomuscle since July of last year according to this article from Science Daily.

When asked how they were able to create this new material, Dr. Koh says:

Our materials mimic those of the human muscle, responding quickly to electrical impulses, instead of slowly for mechanisms driven by hydraulics. Robots move in a jerky manner because of this mechanism. Now, imagine artificial muscles which are pliable, extendable and react in a fraction of a second like those of a human. Robots equipped with such muscles will be able to function in a more human-like manner — and outperform humans in strength.” 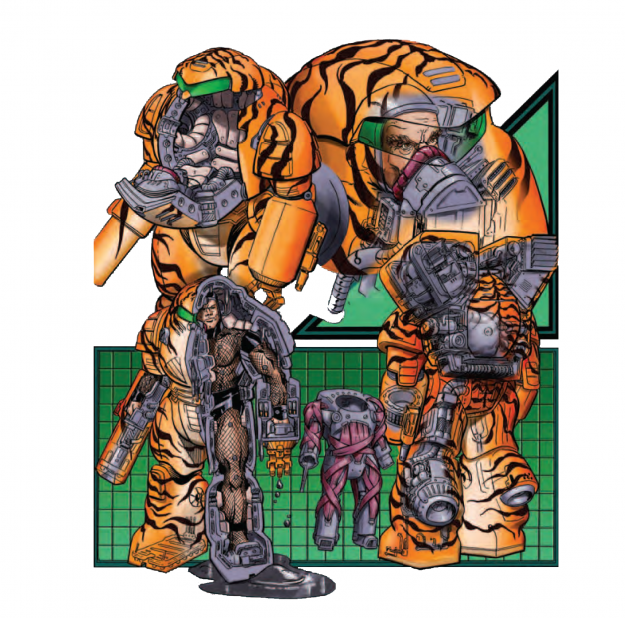 The team worked on creating plastic materials that could stretch to ten times its original length. Dr. Koh told Science Daily, “We put theory to good use. Last year, we calculated theoretically that polymer muscles driven by electrical impulse could potentially have a strain displacement of 1,000 per cent, lifting a load of up to 500 times its own weight. So I asked my students to strive towards this Holy Grail, no matter how impossible it sounded,”

I Have the Power

Human muscles operate by transforming stored body energy into mechanical work. Both they and prior artificial muscle uses electrical impulses to trigger contraction. The NUS material does as well, but is so efficient, to have Dr. Koh explain it, “Our novel muscles are not just strong and responsive. Their movements produce a by-product — energy. As the muscles contract and expand, they are capable of converting mechanical energy into electrical energy. Due to the nature of this material, it is capable of packing a large amount of energy in a small package. We calculated that if one were to build an electrical generator from these soft materials, a ten kg system is capable of producing the same amount of energy of a 1-ton electrical turbine”.

Within a few years, the team hopes to have a robot arm half the weight and size as a real human arm but much stronger. You can only imagine what will happen when this technology proliferates into other fields, like the US Army’s armored exoskeleton project, or DARPA’s various robot programs.

Only time can tell. It all depends on how flexible the muscle is.

3 thoughts on “Ever Closer to Myomer: Artificial Muscles Which Can Lift 80 Times Its Weight!”