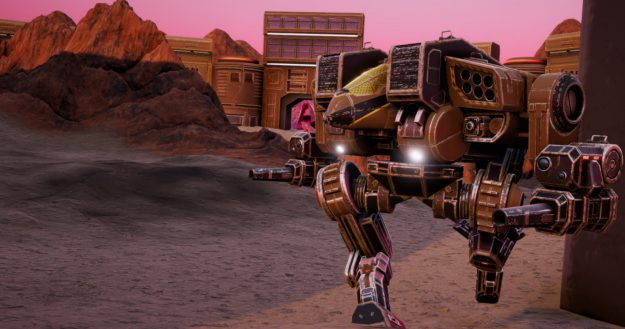 Okay, I know I’ve pooped on MechAssault before as not a real ‘Mech game, but I’m going to eat my own words for a little bit to talk about Wolves, the fan-made MechAssault game.

First, you might be wondering how this hasn’t already been sued into the ground, what with BattleTech’s somewhat litigious history. For that, you can turn to Microsoft’s “Game Content Usage” rules, which essentially allows developer New Day Fiction to recreate MechAssault ‘Mech models to make their own fan game with a few provisos--first and foremost is that they can’t charge money for their game.

That makes Wolves a completely free fan-made project that recreates the third-person ‘Mech combat of MechAssault pretty much perfectly. And now you can get your hands on it thanks to a newly released demo.

I’ve downloaded the demo and I have to say, I’m genuinely impressed. Although there were a few graphical glitches, the core gameplay is fast, smooth, and easy to pick up with mouse and keyboard. It’s still MechAssault, which means you’re spending a lot of time managing health and ammo by picking up power-ups, but some folks like that sort of classic arcade-style gameplay rather than the more simulator-style gameplay you get from traditional MechWarrior games.

So far, the Wolves demo is just three ‘Mechs (Cougar, Blood Adder, and Arctic Wolf), one map, and one single-player game mode that is essentially just you surviving against an endless wave of enemies. There’s not a lot to it, but you can definitely get used to the game’s combat fairly quickly.

The devs also have big plans for Wolves. They eventually plan to include over 25 ‘Mechs, both single-player and multiplayer game modes, new and old weapons from the original MechAssault game, and a new soundtrack composed by Elijah Compton and Jonty Freack.

You can get the full low-down on Wolves on the Sarna page, or you can go to the official Wolves website. There’s also a Wolves Twitter page, subreddit, and of course, Discord.

If you were ever into MechAssault, Wolves will definitely bring back those memories. You can download the Wolves demo here.