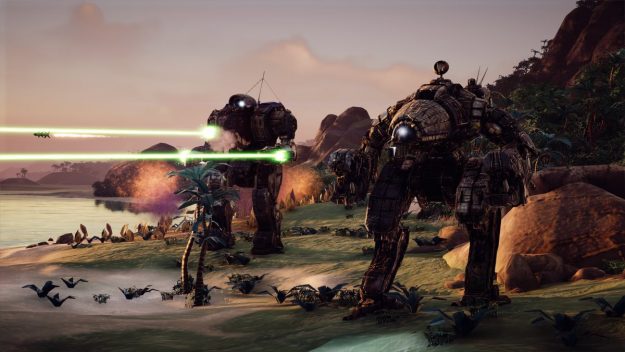 We all knew this day was coming. Flashpoint, the first of hopefully many BattleTech expansions, has been given a release date of November 27th. You can pre-order now and save 10% off your purchase on Steam.

As we may have mentioned before (Hatchetman), there are several exciting new chassis to explore with this expansion (Hatchetman). First is the quick and nimble Crab, capable of operating for extended periods behind enemy lines thanks to it’s all energy loadout (still not a Hatchetman though). There’s also the Cyclops, another C-word ‘Mech that comes with a Lostech battle computer to help with team resolve throughout the fight (still waiting on my Hatchetman).

And of course, how could we forget: the melee-focused Hatchetman (YES!) which uses a 5-ton hatchet to carve its enemies into scrap.

Flashpoints themselves play out as new end-game short story campaigns that will test your skill as a commander but can come with some incredible rewards. Lostech and rare weapons are at the end of these multi-mission mini-campaigns that can range from two to six missions in length. You’ll need to bring many men and machines to take on these varied sorties as there will be no time to rest or refit before the next mission begins.

Start your engines and grasp your hatchets as we're thrilled to tell you that BATTLETECH – Flashpoint will arrive to Mechwarriors all over on November 27th and you can PRE-ORDER today: https://t.co/8IrVt5K6va pic.twitter.com/YToyDkdBuf

In the latest update, Mitch told us that there are approximately 30 hours of new content to be had in Flashpoint, but that seems to completely ignore the numerous hours to be spent grinding out flashpoints for that sweet sweet loot.

Also, apparently the tropical biome has spore clouds. I’m not sure what that means, but nobody has ever looked at a spore cloud and said, “Hey, that looks like a fun place to be!”

In even bigger news, Harebrained Schemes has confirmed there will be two more expansions on top of Flashpoint, with the first one being called Urban Warfare. There were a few somewhat urban settings found in the regular BattleTech campaign, but no true urban settings with enormous skyscrapers and densely packed city streets. That’s all set to change with the next expansion, coming out in the summer of next year (hopefully).

If you’re thinking there might finally be a use for the UrbanMech, then you might be right. Too bad we have to wait until the summer to find out.

Oh, and there’s a season pass available for 20% off on Steam too. I’ma get me that. Daddy likes to save his Canadian pesos.