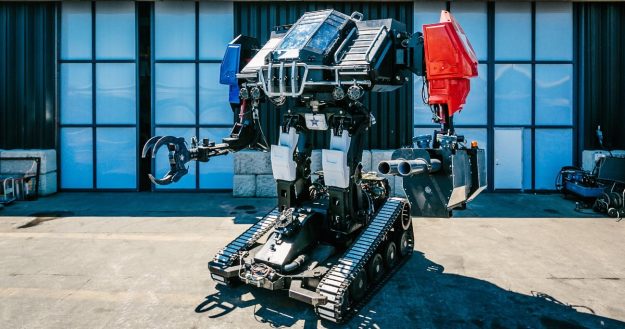 It’s finally happening. The fight of the century between America’s MegaBots Inc. and Japan’s Suidobashi Heavy Industry for the title of world’s greatest giant robot maker is about to happen.

Or more accurately, it’s already happened. The fight has yet to be aired, but the duel between the Eagle Prime and the Kuratas has actually already occurred with the whole thing being recorded and edited for broadcast. That broadcast is set to happen next Tuesday, October 17th at 7 PM PST (that’s 10 PM EST) on MegaBots’ Twitch channel.

As we reported back in August the duel between these giant death machines was to occur in September, and apparently the whole thing was done in an abandoned steel mill in Japan without any spectators – just the engineering teams from both sides. The duel was fought over several days since after each battle both ‘Mechs required repairs, and just like in BattleTech it can take a few days to repair grievous damage to a giant robot. This also explains why it wasn’t live streamed like a traditional sport since it would’ve been a few minutes of mayhem followed by days of technicians with welders and duct tape.

We’ve also learned a few more details. The commentators are Mike Goldberg of MMA fame and Saura Naderi, a robotics engineer at Qualcomm. Also, there was no scoring involved in any of the battles: matches were fought to a knockout, which meant that either the robot was completely knocked over or otherwise incapacitated.

It seems like a lifetime ago since the fight was announced way back in 2015. Now that the day has finally arrived I can hardly contain my excitement. Here’s hoping it was a good fight, and may the best giant robot win!