Having just left the Renaissance Pleasure Faire (another wonderful nerdy experience for anyone who hasn’t tried it), I headed down the 54 freeway to a small game shop. This area is completely unfamiliar to me, yet I have a sixth sense as to where this place may be. It must be the inner table top gamer yearning for well-painted miniatures and well-loved lore.

The SoCal 2013 BattleTech tournament is held in Fullerton. Stepping inside, you see everything you need to know about BattleTech: technical readouts, sourcebooks, well painted terrain, and most importantly, BattleMechs. 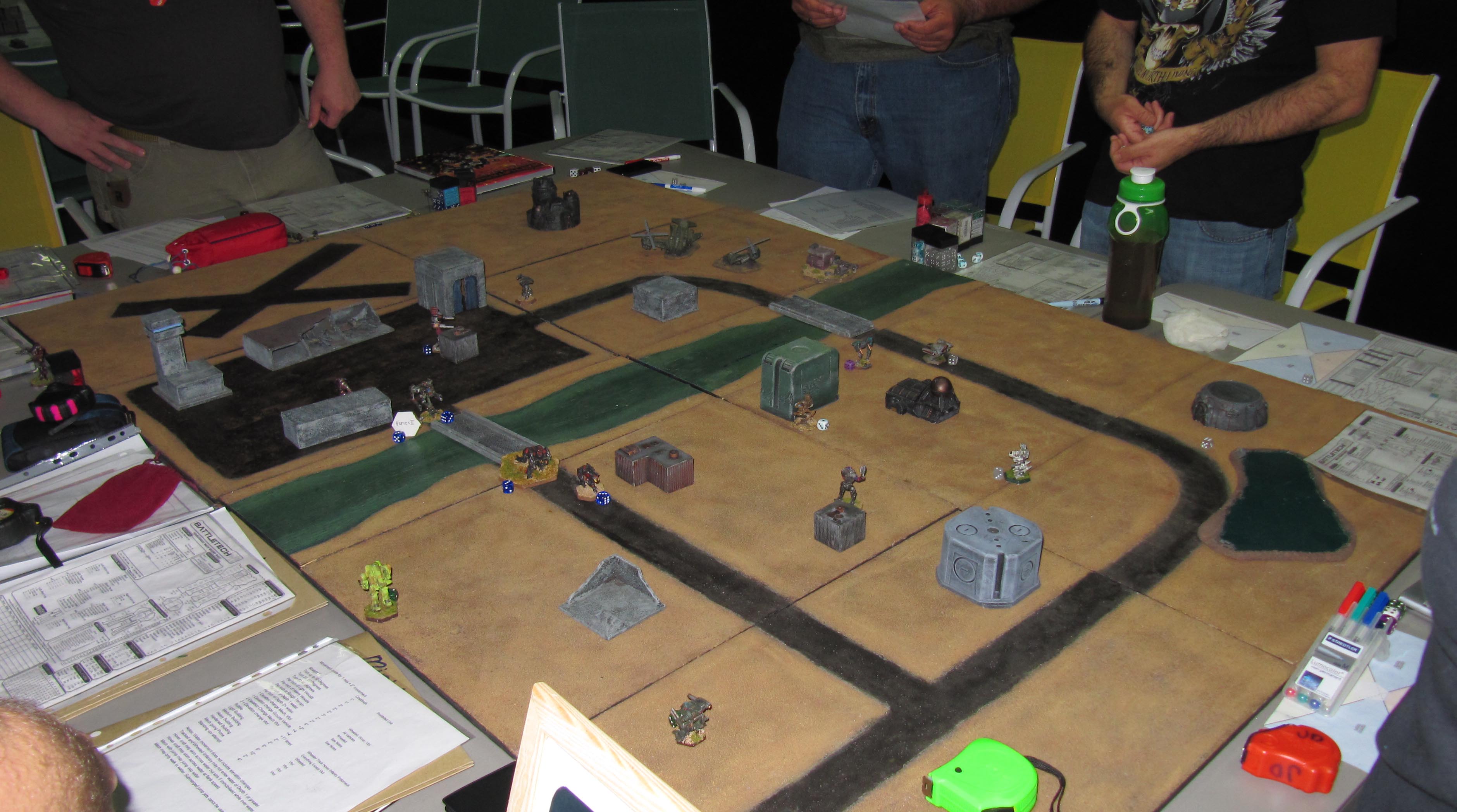 As I walk in, the tournament is set into two parts: a large single table where classic ‘large’ battles take place, and a single long table setup like a race. Akin to the movie ‘Death Race’ and based on the gaming world of Solaris VII, this tight knit race of light ‘mechs was definitely the more interesting of the two.

About thirty players were present, mostly those who have been playing BattleTech since the 80s and 90s. Just from a demographic perspective, the average BattleTech player is older than say the average video gamer. So the question is really an issue of exposure: if young blood is not introduced into the Battletech community, where does it go in the next five to ten years? I will touch on that in another post. But for now, let’s just bask in the glory of a BattleTech tournament.

The main event was ComStar versus Jade Falcon with six or more players each controlling a single ‘Mech. In a city setting with a river spanning the middle, the two sides were seemingly evenly matched. Each side had a commander, and the war quickly turned against ComStar. The mega-battle was seemingly always in the hands of the Falcons (as befitting the genetically engineered warriors of the Clans). With two variants of the iconic Timber Wolf and a single Executioner, the ComStar forces were seriously out-tonned and clearly having a harder time of it.

The big event had veterans and newbies. With Clan Tech, MASC, and two ComStar ‘Mechs that are quads, it is the perfect environment to learn. The match does lack infantry, vehicles and aerospace fighters but it hits all of the necessary angles to give experienced players a run for their money and friendly help to the few new players. As someone who normally has MegaMek to help him compute the myriad modifiers of the game, the on site help from Catalyst volunteers was definitely a plus.

There were three volunteer Catalyst representatives there. One was the logistics, and the other was the teacher. CamoSpecs also had a representative there. Out of all of them, I got to know Aaron Jameson the best. Aaron concocted and ran the Death Race event, and all of four of them definitely add a lot of love and attention to the atmosphere. Yet none of this would have happened were it not for the store itself.

The store manager, Eric, decided to host the event after his assistant manager, Steve Vivez, introduced him to the game. Steve was the first in the store to be introduced to BattleTech, and like many of us, was entranced by how many things you can do with a BattleMech. For him, it was the iconic Death From Above maneuver. For the uninitiated, a Death From Above is when a BattleMech equipped with Jump Jets jumps on top of a target, producing a large amount of damage when the ‘Mech’s legs go feet first into the enemy’s cockpit. When the store manager was introduced to the game, he decided to host the tournament at the store.

The tournament itself was a load of fun. These BattleTech veterans were very helpful as well as open. Conversations could occasionally become very esoteric and very ‘in the know’: while I am definitely a lore hound, topics such as “painter X’s” paint style, and “painter Ys” highlights could definitely leave a new person feeling very left out. These moments are rare. They never detracted from the overall vibe of the tournament. It only served to highlight the love many of them have for BattleTech.

When I asked these many veterans about their favorite eras, many of them yearned for and basked in the old times. These older gentlemen, many in the late 30s or 40s, responded that only the good ol’ days. Andrew Alvarez, when asked how long he had been playing said, “I got my first box set in ’87, ‘88”. Others such as John Hallum have also been playing since that time, saying that his favorite part was the Clan invasion. 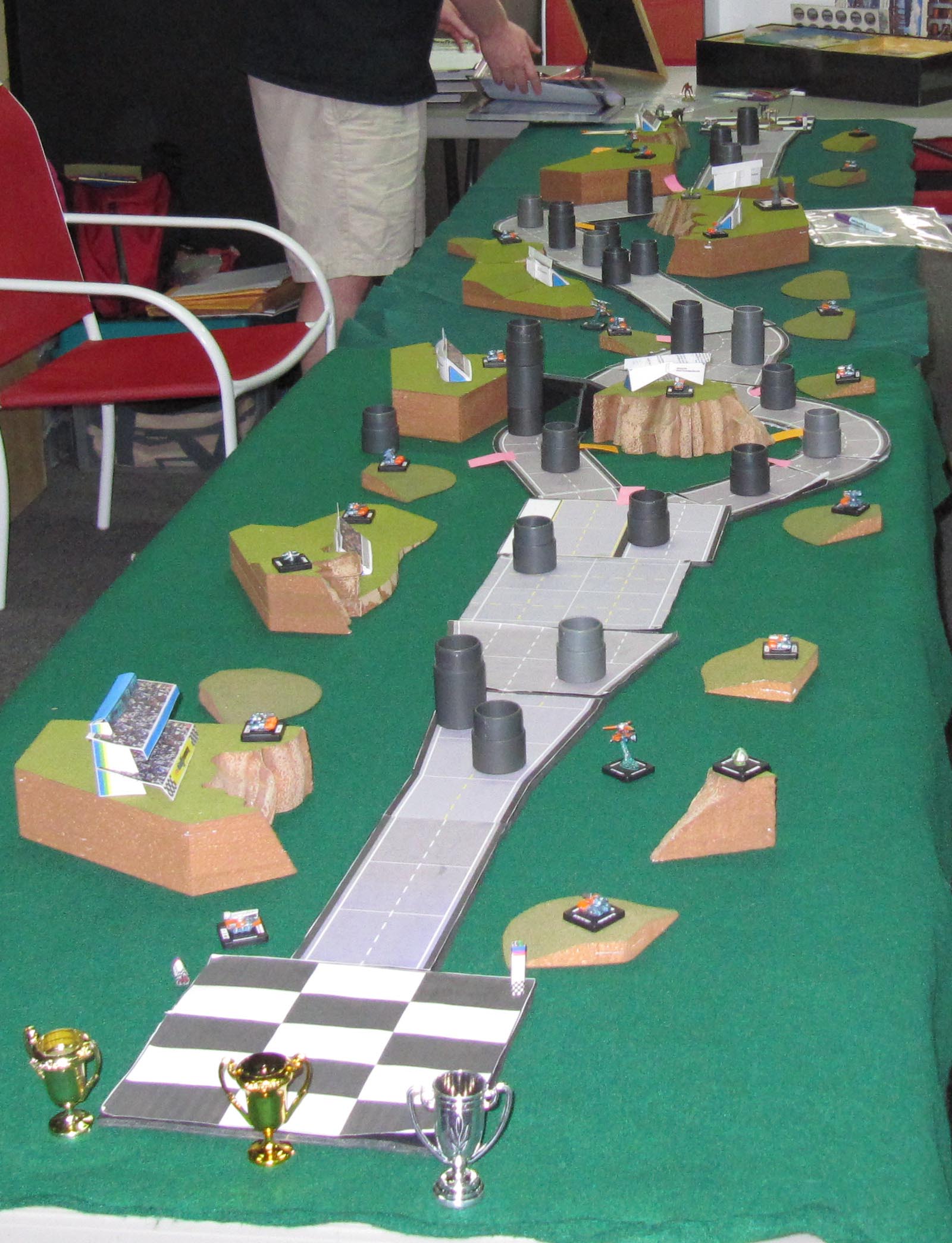 However, the favorite part of the Tournament was in no way era based; it was planet based. The Death Race was amazing creation of intelligence, lore, and love. The intelligence was in how fluid and exciting the whole thing was. The lore was perfect in how the detailed and intricate setting came to life (on Solaris VII, with guards that shot back, and stands with spectators that could inadvertently be injured). And the love that it created in the players that were mostly new to the game (many of the newer players played the Death Race instead of the ‘main event’).

When I arrived the main game was already going on so I was roped into the Death Race. The Death Race required us to select a light ‘Mech and then traverse a windy course. The course itself consistently moved, with randomly moving and appearing pillars to stop or slow movement. This is even more important because it’s on pavement, and all the rules from sourcebooks like Total Warfare were applied, so skidding was a big factor. In true Solaris style winning was the first person to cross the finish line. But combat between ‘Mechs was completely allowed.

For my ‘Mech, I chose a WLF-3S Wolfhound: while everyone else was using fast ‘Mechs with lots of jump capability, I went for the one with heavy weaponry. 6/9 is a respectable speed for a light ‘Mech, and it definitely told when the race began. I was put into a box with one other ‘Mech, a Dola. He had jumped on a pillar and got shot in the rear by my ‘Mech’s ER-PPC, making him fall off the pillar and take an excruciatingly painful amount of damage. But, in retribution, his sword chopped off my Wolfhound’s arm. Of course it would be the one containing the ER-PPC.

Due to time constraints, the Death Race did not last long. After two rounds, one ‘Mech got completely ahead of the other. But of all of the events of the day, the Death Race was definitely the most enjoyable.

One of the big problems with the tournament was its lack of presence. This was no one’s fault in particular; it’s a casualty of the game. There’s not a lot of hype around BattleTech as a tabletop game: that still revolves around Games Workshop and its Warhammer and Warhammer 40k franchises. The volunteers are amazing, but they’re just that, volunteers. It does not have, or at least does not feel like it has, true corporate sponsorship. And while games like Leviathan were present, it just doesn’t have the pizzaz of a hulking Space Marine. That’s odd, considering that Mecha is such a large fandom and how popular the MechWarrior games have always been.

So what does it mean for the BattleTech community: I’m not sure. The tournament was loads of fun, and the store manager’s appreciation for the game definitely expanded by playing the non-classic Death Race instead of the normal “Deathmatch” style BattleTech. I will definitely expand on this point in another post.

In a nutshell: Does that mean I will attend another tournament? Yes! As the first time I’ve ever been able to play tabletop BattleTech (excluding MegaMek), seeing other BattleTech players in the flesh was both exciting and wonderful. Seeing painted models (besides my own), was definitely a treat. And the player base is always happy to see another fresh face and help them with any questions, and modifiers, you may have.