A while back I wrote an article about the TALOS and Warrior Web powered exoskeleton projects from the Defense Advanced Research Projects Agency. But now the Oblivion and Minority Report star is tapping into the buzz on the real-life military programs to help push his new Sci-Fi thriller Edge of Tomorrow, also starring Bill Paxton and Emily Blunt and based on the novel All You Need Is Kill by Dante W. Harper. 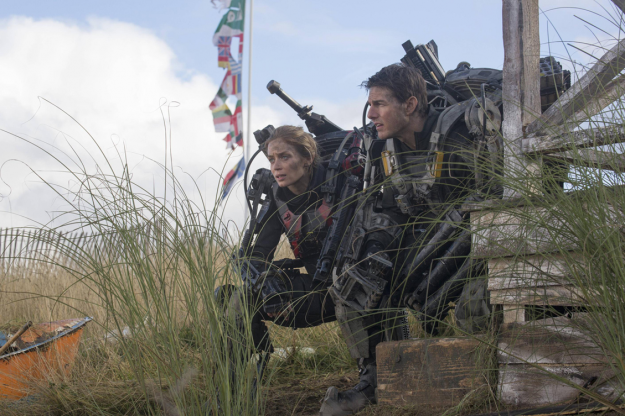 Not terribly stealthy, but multiple man-portable support class weapons are nothing to sneeze at.

The film boils down to your standard Earth vs. Alien monsters fare with a side order of time displacement and a double helping of a realistic-looking type of powered armor. The Edge of Tomorrow suit looks to be based more closely on SARCOS’ XOS suit instead of the DARPA projects, with what appears to be a bare exoframe armored by standard heavy infantry Interceptor type kevlar and ceramic SAPI plates.

Instead of heavier armor, the EoT suit is set up more like a heavy weapons platform. Instead of free hands, the suits have XOS-style sheaths that contain the hands and controls for weapons and other equipment. There appears to be four weapon stations- a standard anti-personnel weapon and room for another on each arm and a pair of retractable hardpoints on the back loaded with what look like an array of grenade launchers, rocket pods, anti-tank missiles, and chain guns. There is probably a Heads-Up Display in the helmet to aim, designate laser-guided weapons, etc. 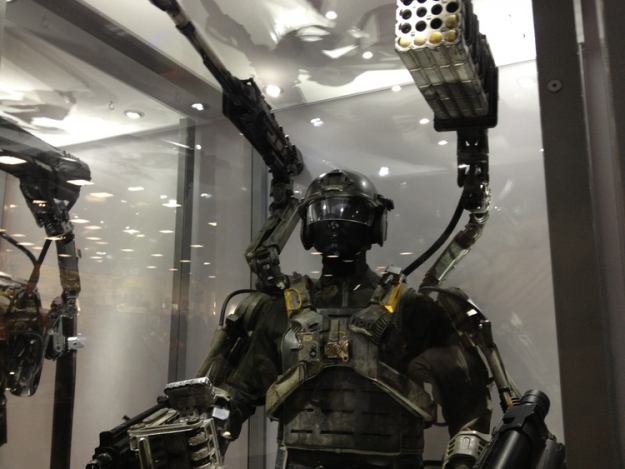 I’d opt for some heavier armor, personally, but I’m not gonna go tell them.

Along with Mat Damon’s far more painful-looking exoskeleton in Elysium, Iron Man, GI-Joe, Avatar, and even Pacific Rim and Patlabor Mobile Police movies, powered armor and mecha have hit the main stream with both armored feet.

It may be mainly Hollywood scrambling for genres it hasn’t beaten to death yet- but you won’t hear me complaining.

One thought on “From Top Gun to Powered Armor, Tom Cruise pushes DARPA’s new line of exosuits in Edge of Tomorrow”