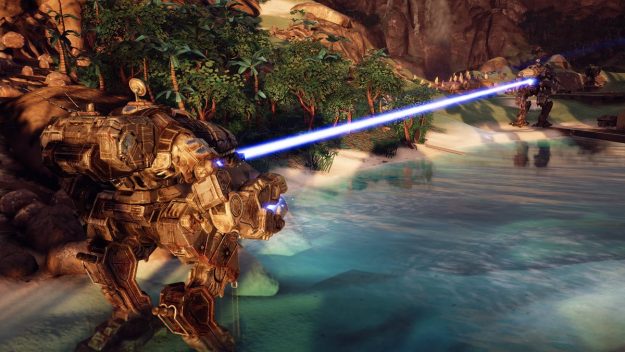 Last Thursday, Harebrained bigwig Mitch Gitelman and lead BattleTech designer Kiva Maginn sat down with Anders Carlsson of Paradox Interactive to do a live Twitch stream of an early development build of the upcoming BattleTech expansion, Flashpoint. And they barely made it out with a single ‘Mech.

Flashpoints are a new post-campaign mission type where the player will engage in a sort of BattleTech short story. Each contract is comprised of a series of missions varying between two to six. Since these all take place one after the other, there won’t be any chance for major refits or for pilots to recover from injuries. You’ll need to have an A-team and a B-team of both ‘Mechs and pilots to replace your losses throughout the Flashpoint.

Since these missions take place after the campaign, it assumes the player is an experienced veteran and is looking for an additional challenge. Thus, the missions are likely going to be harder than your average campaign mission. However, the rewards for completing a Flashpoint can include Lostech, rare equipment, and other such goodies that might make the sacrifice in man and machine worth it. 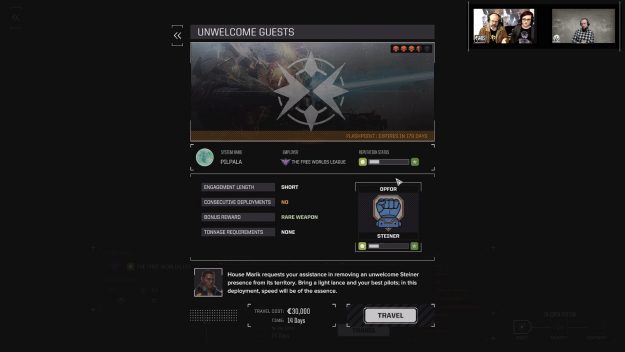 The initial teaser made it seem like Flashpoints weren’t available until after the main campaign, but Gitelman let it drop that there are some changes coming in patch 1.3 that might allow Flashpoints to occur concurrently with the campaign–so long as you’re at an “open sandbox” portion, that is.

Obviously things are still in development and subject to change, but this seems like it’ll greatly enhance the core BattleTech gameplay.

Kiva and Mitch showed off a single mission during the stream with a new mission type called “Target Acquisition”. This new mission type requires you to bring a lance of fast but tough machines since you’ll need to split your forces to grab several key locations in order to call in an artillery drop. Each ‘Mech needs to be fast enough to get to the location quickly, but tough enough to take a beating once they get there.

Our Harebrained heroes were up against two full Steiner lances, which meant they were up against a lot of heavy firepower. Also, since they were looking to show off the new ‘Mech designs, their composition wasn’t exactly ideal. Consequently, two pilots died and one ejected (and yes, Dekker was one of them). 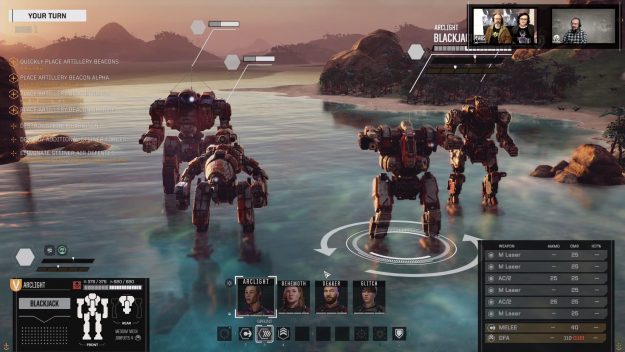 We got our first good look at the new Crab, Hatchetman, and Cyclops designs before most of them bought it. The Crab is as expected: swift, low-slung, and filled to the brim with lasers. The Hatchetman can be a deadly combatant in melee but is vulnerable to long-range fire. The Cyclops comes with a Lostech Battle Computer that will greatly affect your lance’s resolve, but Harebrained is still tweaking by just how much.

From the looks of things, this Flashpoint would be hard even for a fully prepared mercenary commander. Mitch said that the team had actually nerfed the difficulty twice, so maybe this is a case where some more tweaks are still in store. At least the new tropical biome looked gorgeous throughout the video.

You can check out the whole stream on Paradox’s Twitch channel, or here where I’ve helpfully embedded it for you. I’m helpful.

Watch BattleTech from ParadoxInteractive on www.twitch.tv

We don’t know when in November Flashpoint will come out, but even if it’s a little later in the month that’s still just a few weeks away. If you’ve already gone through a few campaigns in BattleTech, be prepared to dust off your old save file to get ready to drop jokers with a hatchet to the face.