Yup. You read that right. Harmony Gold is at it again with another round of lawsuits aimed at BattleTech IP.

The story broke a few days ago (thanks to user Clanfighter for the comment tip!), and the Harebrained Schemes (HBS) and MechWarrior Online forums are ablaze. There’s a lot of vitriol being spewed (rightly) against Harmony Gold for being litigious parasites and trying to cash in on BattleTech‘s and MechWarrior Online’s success, and while that’s certainly true, there’s a little more to it than that.

First, let’s take a look at the actual lawsuit itself. Court documents filed last March by the law firm Calfo Eakes & Ostrovsky PLLC reveal that Harmony Gold is suing both Harebrained Schemes and PGI for copyright infringement on their Robotech imagery, which so far sounds just like what happened with the Unseen saga. That ended with Catalyst Game Labs releasing new artwork for the unseen ‘Mechs, and we all thought everything was done for good.

Harmony Gold apparently felt differently. The new suit names PGI as the primary defendants, saying the current models used for the Rifleman, Archer, Warhammer, Marauder and Phoenix Hawk are similar enough to the original Robotech images that they infringe the copyright. It also names HBS as another defendant saying that their use of the Atlas, Locust, and Shadowhawk are too similar to their property to be used in the upcoming BattleTech game. 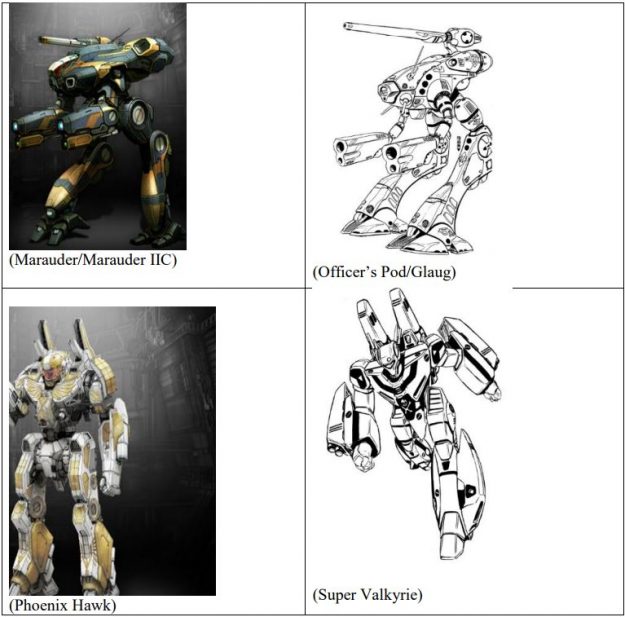 I took out some of the images filed in the court documents so we can take a look. For the complaint against PGI, you can maybe make an argument they’re similar but so similar they infringe? That’s harder to say. I’m no lawyer, but I do know that courts often look to specifics rather than general shapes when determining these kinds of cases, and you can easily spot dozens of differences between the two designs being compared. 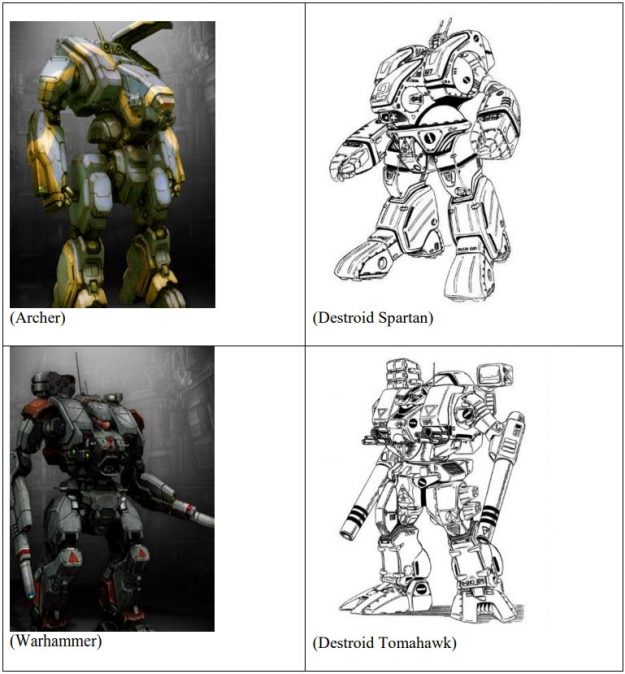 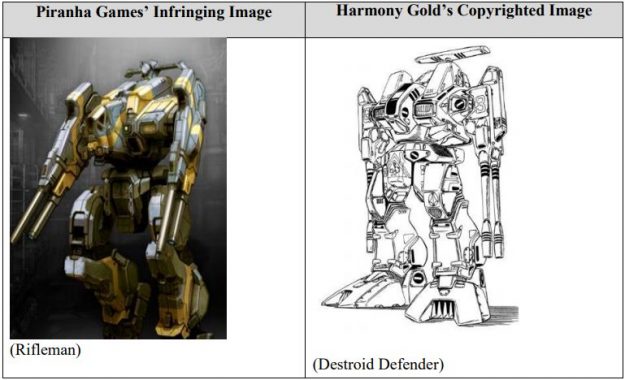 The pictures being used against HBS look even less alike. In fact, the whole argument seems spurious at best. An Atlas looks like a Crusader? A Shadowhawk looks like an Archer? A Locust looks like a Marauder? These ‘Mechs don’t even share the same silhouette, let alone any specific details. It’s like Harmony Gold is trying to say that nobody else can have giant robots since they have a passing resemblance to their giant robots. 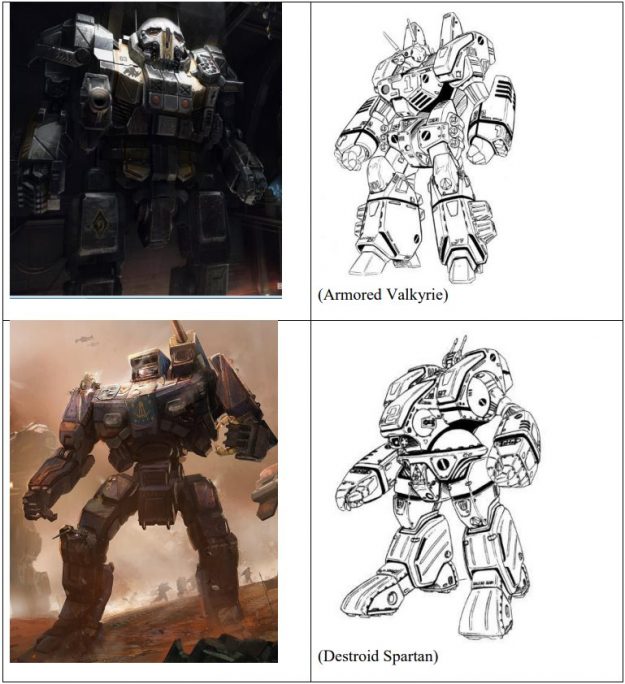 The case against HBS is sure to be tossed as soon as it goes before a judge. The case for PGI might linger on, but I’m fairly confident that PGI has prepared for this day and has numerous counter arguments to keep their game safe.

The case against HBS is sure to be tossed as soon as it goes before a judge.

There were a few more interesting tidbits to be gleaned from the court docs. Apparently, PGI had been in contact with Harmony Gold in 2013 when they were planning on releasing the Warhammer and Marauder ‘Mechs in MechWarrior Online. Both times Harmony Gold said the submitted designs were too similar and infringed on their copyright. We don’t know what those earlier designs might have looked like, but you can see from the images above that the current models for the Warhammer and Marauder are very different from the original Robotech designs.

Also mentioned in the suit is how Harmony Gold “discovered” the infringing materials. Evidently, it was an old news post by Catalyst Game Labs on their partnership with PGI in creating some “lore vignettes” in 2016. The blog post featured a schematic image of the Warhammer, which was released in MechWarrior Online in January 2016. Both the Marauder and the Marauder IIC were released later in 2016.

It says something about how confident PGI is in their position that they still released both the Marauder and Warhammer despite having the court documents filed just before their release in MWO.

So why is Harmony Gold pursuing this case when they seem to have a very good chance of losing? Well, they could be hoping for a quick settlement with both PGI and HBS, however, given the strength of their defense, I doubt either would be inclined to let Harmony Gold win this time.

On the other hand, Harmony Gold has a very good reason to pursue this case as aggressively as they can. The Robotech live action movie is going full steam ahead, and there are probably plans to have both game and action figure tie-ins with the movie. Nevermind the fact the movie has no script, no cast, and has just recently changed directors to the same guy that did Stephen King’s It adaptation.

Harmony Gold could also be using this case as a means of testing the legal waters for a future lawsuit against MechWarrior 5: Mercenaries.

Harmony Gold could also be using this case as a means of testing the legal waters for a future lawsuit against MechWarrior 5: Mercenaries. We know that PGI’s upcoming single-player game will feature some of the Unseen designs, and if it’s as financially successful as it’s expected to be (and if the Robotech movie doesn’t crash and burn like every other live-action anime movie) then Harmony Gold could stand to make a bundle.

One thing for certain is that neither PGI nor HBS is likely to comment on the case anytime soon as the trial is set for September of 2018. Here’s hoping they lose, and badly.

42 thoughts on “Harmony Gold Is At It Again…”