Welcome back to part two of my interview with Homebrew miniature builder Chris Gotcher. This time we’re getting into how he goes about producing a new mini, how to find them and some other things he’s working on.

Ron: How can someone get ahold of some of your creations?

CG: I have an interest list over at LordsOfTheBattlefield.com in the trade/sell section that has all the details. Tabletop folks know that if it’s anything Battle Tech, you can find it over there. I do feel this limits exposure for the pure video game fans and Dark Age players though, so I’d like to get the word out more in those circles so people don’t miss out. 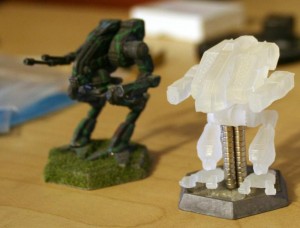 Ron: Could you tell me a bit about the process you use to develop your custom ‘mech designs, especially how you capture the distinct looks that Alex and Dave both used?

CG: Having a base model saves a lot of time compared to scratch but it’s only recently with MWO [MechWarrior Online] that you have game models good enough to use as a base. The Cryengine setup for MWO has allowed tons of fan artists to pull models and textures directly from MWO. The models are very good but unsuitable for printing without a lot of modification.

For MWO stuff, first I take the base model parts and assemble them into a complete ‘mech in Blender. I keep one unmodified textured version back for surface detail reference later. I simplify the model, remove redundant vertices, hollow it out, make it watertight, etc. Then it gets to adding details and remaking delicate bits suitable for print. I use Alex’s original concept art as my primary reference and the textured model for the views not shown. Ladder rungs and rails are remade and beefed up, raised panels, panel lines and vents are added, all the little things that bring it to life. Then I use a volume formula I created for N-scale minis to accurately scale the model for printing.

When the print is finished, I give it the modeler’s touch. I prime it, then go over the entire ‘mech, remove print lines and engrave panel lines deeper where they need it. I putty areas that need filling and prep the model for molding. After that, it’s basically like producing any other garage kit or mini in resin.

The original MWO Cataphract print was mostly a proof-of-concept piece that had much less work done in 3D than later models. It had all sorts of artifacts and missing panels and toes due to internal geometries in the print and the way the 3D print program recognized objects. Nothing an experienced modeler couldn’t fix with styrene and putty but just a great example of the problems you get when you don’t do it right. 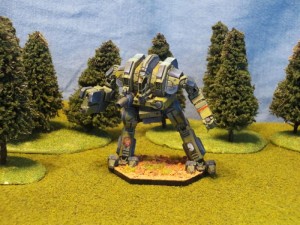 Ron: What has been your favorite ‘Mech to develop so far? Did you immediately jump on designs that you personally like to play or find aesthetically pleasing?

CG: I would have to say my favorite so far has been the MW4 Vulture Mk II. It was almost a total rebuild based on community feedback and help from Anthony Scroggins art-wise on beefing it up and adding a more modern look to it.

Design-wise I tend to focus on chassis that are both cool and unavailable in N-scale. And I’ve always been a huge fan of Alex’s style. The number of 3025 designs that were left out of DA that are in MWO makes it a match made in heaven. Having a Cataphract at all would make any N-scaler happy. Having an MWO one is like being a kid at Christmas.

Ron: Would you ever consider developing ‘Mech model variants, for instance the Hunchback J-model LRM-equipped support ‘Mech or a Yen Lo Wang Centurion? What about custom parts for home kitbash jobs?

CG: This is a definite yes on the easy gals like the K2 Catapult or the LRM Jagermech, but more extensive chassis reworks would be on a case-by case basis. As for custom generic parts, a big strength of BattleTech is the all the varied styles that lets you pull from everywhere for your parts bin. I’d still definitely have any existing variant parts available separately for folks who wanted a couple extra LRM’s or PPC’s etc. from existing models. I’ve already offered variant hands and destroyed ‘mech markers as part of a model run.

By establishing a baseline and standardized scale I can hopefully show IWM a simple guideline to sculptors to have an accepted range of sizes for each weight class. Something that’s as simple to test as having $20 of lab glassware and a little water at home. I did a number of statistical analyses when working on my Masters in Geology so I’m used to looking at a natural or undocumented system and putting some numbers to it. Statistics was invented for biological studies in the first place, but look at how much it’s wormed it’s way into the rest of society because it’s pretty handy.And this is base-level stuff.

Ron: Do you think anyone could adapt this method of standardizing?

CG: I do think this would apply well to other systems and it’s infinitely scalable. No more guessing on just how big a ‘mech will be. No more 1/55 Joyride Madcat being smaller than a 1/60 Armorcast Madcat.You could use it for any mech or vehicle type that uses a similar set of standardized construction or has a similar density, adjusted for fluff concerns when appropriate.

Ron: Anything you’d like to plug or bring up?

CG: Another related project I have going on is to track the miniature volume-per-ton for every mass-produced mech miniature manufactured for BattleTech by [Ral Partha] and [Iron Wind Metals] in standard 6mm scale. I hope when it’s completely finished, we’ll finally have true solid scale standardization on miniature size and the first real numbers on scale creep. Right now, there’s good data from 1984 up to about 1997 and I can’t wait to see where it goes from here.

This also lets me move toward having a true standardized N-scale. For the moment I’ve chosen the universally acclaimed Elfbait garage Atlas as my standard for N-scale size. It’s a good working start that lines up in the middle ground of the theoretical 1/285-to-1/150 conversion of existing minis. I started to apply this with my 3rd mini as you can see the old trick of using a conversion of the original RP [Ral Partha] standard scale mini height doesn’t work so well on a chunky guy like the Jenner. She winds up a tad bigger than necessary.

Oh, and there’s still a couple of N-scale MWO Cataphracts and Jenners left if you hurry!

Ron: For now, I suppose it is for the best that Chris has had low production numbers so far. Otherwise I’d probably be broke within a week. Thanks, Chris.

One thought on “Interview With a Custom Miniature Maker – Part Two”