Welcome back to part two of my spotlight on home simpits. In the course of my investigation I came to meet Night Reaper; whom I covered in the previous article. He had quite a bit to say on the subject, so I decided to expand the coverage of home simpits. Apparently with an eye out for freebies and some ingenuity,  a home ‘mech cockpit might not be so far-fetched for your home.

Ron: What possessed you to put a pit together?

NR: I was a huge fan of Mechwarrior 2 and 3 way back when. So when MekTek released MW4 for free and not long after Mechwarrior Online was first announced, I couldn’t stop talking about it.  Around that time, my son (who was 19 at the time) bought the Steel Battalion game and controller and brought it home to play on his old Xbox. He didn’t like the game that much, but I loved that controller and found that it can be hacked to work with Windows. A couple of days later, I saw that my neighbor was discarding a couple of large pieces of framed OSB; “chipboard” which had been a failed attempt at a workbench or something. 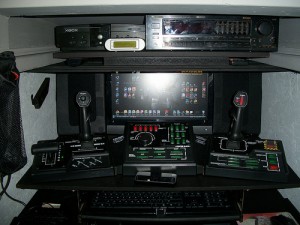 Inspiration struck me and I rescued these framed wood panels from the curb with the idea of making a simulator cockpit of some kind.  From the beginning, I decided to try to make it look like an actual mech and my son and I came up with the concept of it resembling the head/cockpit of a Panther (PNT-10K) from the illustrations on Sarna.net.  He donated some of his old hardware and we decided to make a project of it.  In addition to the framed OSB, I had a large piece of reinforced MDF (floor), a subwoofer (Dual 10″ Full Range Sub Box, 300 Watts), and a friend’s discarded Ikea coffee table (sub/monitor and controller shelves).

To this we added the VT controller, a monitor, a Logitech G13 and a lot of wiring.  I have recently redone the software load on the computers and it will now play EVERY mech game from Crescent Hawks’ Inception to Mechwarrior Online. (Screenshot also attached) But, realisitically, with the constant upgrades and better detailing always ongoing, I don’t think the end will EVER be in sight.

Ron: Playing Crescent Hawks in a modern simpit is a bit like a scooter with a five-point harness. Do you find yourself that much more engrossed in the game?

NR: With 300 watts of sub[woofer] pushing 8 speakers in a space the size of a bathtub you FEEL every hit. There are controls, buttons and switches all over the place, many real, many just cosmetic window dressing added to evoke the feeling of being in the most complex machine mankind will ever devise. There is the complete removal of all sensory input save what the games provide…yeah, I’d say it’s immersive. 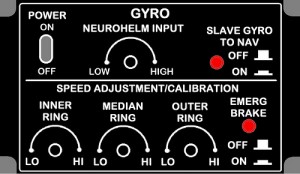 Plus, with the 2 computers, monitor, amplifiers, not to mention the body heat of a grown man, it can get pretty warm in there.  I’ve often thought that the Fan:On/Off switch ought to be labeled “IMMERSION LEVEL: Low/High” as we all know ‘mechs get HOT!

Ron: Sounds like you could use a cooling vest and a cooler of Vita Orange. I’m afraid I’ll have to wrap up my interview with Nightly Reaper tomorrow. Join us then for some more home simpit goodness. Definitely not for the claustrophobic.