Welcome back to my second part of the Nightly Reaper interview and third part of my home simpit special. Starting off we’ll get into the social aspects of owning a giant ‘Mech cockpit.

Ron: Do you find that you’ve spent way more time in your ‘pit than you meant to?

NR: During the winter, I went back to college and was working on schoolwork most of the time that I wasn’t at work and had little time to play.  Whenever I did have time, I found that it was all too easy to say “Just one more mission before bed!” and find myself suffering for it at work the next day.  This was especially true of MechWarrior 4 which fully supports the Steel Battalion Vertical Tank controller and pedals.  This controller just makes playing the game more fun and therefore harder to stop playing. 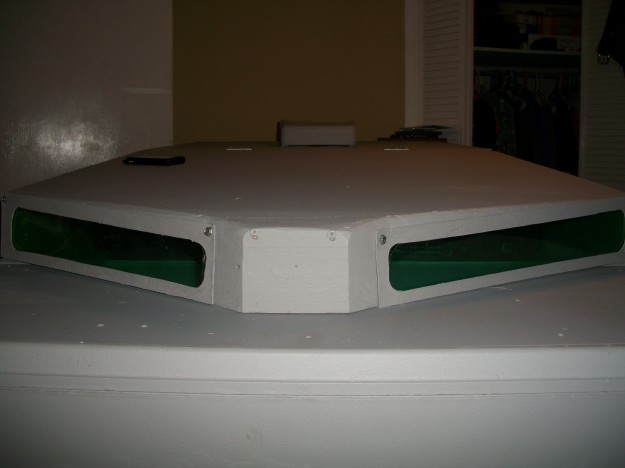 Ron: I’d probably forget how to sleep. How do friends and family react to you having built one of these?

NR: Of all of the components I have listed which comprise this ‘Mech sim, the one vitally important ingredient to have is a tolerant spouse who is patient with this sort of thing.  The stuff that I get up to is often inexplicable to her and no amount of sketches on a whiteboard will make it clearer why we should convert a guest bedroom to a ‘Mech-lab.

I soon hope to have the full ‘Mech-lab experience complete with room décor and TV’s playing the old Jim Belushi “Welcome to BattleTech” barker video in the background. The “SIMULATOR IN USE” flashing red light outside the door is going to be a HARD SELL but I already own the light. As for the rest of the family, they look incredulously at it and some have called it a “spaceship” but they humor me. 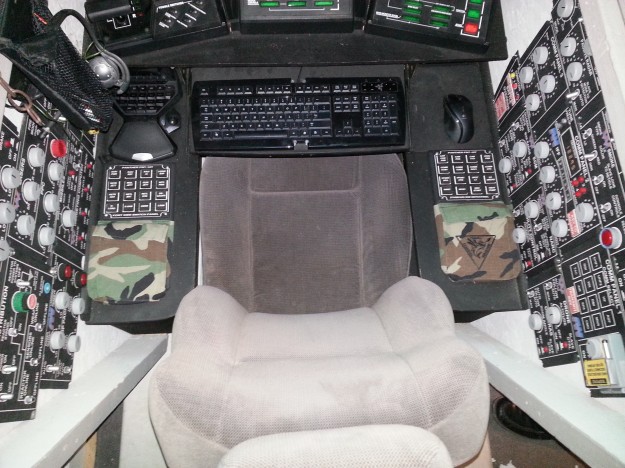 Ron: You must be a big hit with the kids.

NR: My grand-daughter loves it and is deadly. Story: There was a little boy about 4-years-old who I didn’t know that someone brought to the big family Christmas party we have at my house every year and he looked kinda bummed out because he didn’t know anyone.  He had a Transformer toy in his hand he was fiddling with.  I went over to him and said: “So you like Transformers? You know, I own a giant robot.” To which he replied “Nuh-uh”.  At this, my 3-year-old granddaughter looked at him coolly and said “Uh-huh” and then she walked him awestruck into the ‘Mech-lab, got the reactor, sensors and weapons online and proceeded to demonstrate to him the term “roving slaughterhouse” in her pink, Hello Kitty custom-skinned Mad Cat.  Me-owww.

To entertain little kids who haven’t yet learned what they’re doing there’s an external display and game controller to allow someone outside to let the kid think that they are the one controlling it from inside.  Kids absolutely love this. FYI: “Shoot the Robots” is a game that NEVER gets old to a kid.

Ron: The time to make one of these is considerable. Have you ever thought of collaborating to build
a couple to be rented out to conventions or events? You’d be a hit.

NR: Father’s Day 2013 will be the one year anniversary of this thing firing up for the first time.  It has
become much more polished since then and the detailing is ALMOST complete as we speak but it is in essence nothing more than a collection of the cheapest, slapped together wood, filled with old, discarded, and donated hardware with a lot of old games that few are still interested in playing.  But I’m happy with it.

It’s a cheaper mid-life crisis reaction than a Corvette and it provides me a hobby to keep me out of the bars.  If I were to ever build another, it would have a similar layout but there would be a huge level of planning and design that did not go into this unit.  This pit sort of “fell together” very fortuitously and although designed to be disassembled/reassembled fairly easily, it is not durable enough to be what one would call “portable”.  With all the measurements I have, I could create another, better one in one time but as much as I would love to have 4 of these wired up for instant group play, I wouldn’t do that to my wife.

Ron: Who are the people you wish to thank for helping with the build?

NR: As I have said, this MechPit was built from discarded and donated materials.  My son Aaron gets credit for providing much of the initial hardware and my friend Frank gets credit for providing all of the power tools needed.  My wife gets my undying gratitude for putting up with over a year of my crap while building this thing.  Love you, Honey.

As far as inspiration goes, I mention the builds of Choowy and Turbocorvair as being the Holy Grail that I will never attain.  I have the utmost respect for what they’ve done.  I acknowledge and link to their builds here.

Also, none of this would be possible without the efforts of MWO forum members HackNFly and Baron von Pilsner who came up with the drivers and joystick configs for the Steel Battalion controller which my sim is built around.

Ron: I don’t know about you guys, but I hope there’s plenty more being tinkered on in mancaves around the world.