This time I have Darrin Teigen, known as “Spaceman Spiff” in some forums and modeling circles. He has a long time passion for making models and modifying miniatures for fun and profit. And as you will see, he’s exceptionally good at what he does. For those of you out there that like to alter, or ‘kitbash’ models and minis, stick around. You may learn a thing or two.

Ron: Tell me a bit about yourself. How long have you been into modeling? Do you play the table top games as well?

DT: My first model was a Tyrannosaurus Rex- I was probably 10 years old. I am 43 now. I didn’t really get into model building until I discovered table-top gaming miniatures. Then things kinda took off. My first miniatures were a box of Grenadier fighters to go with my Dungeons & Dragons role playing days. When I was 18, I was the resident painter at my local game shop in Des Moines, IA where I would set up a table on the weekends and paint minis where the customers could see the magic happening. Then along came two games specifically created for miniature wargaming- BattleTech and Warhammer 40K. I have long since grown out of Warhammer, and I have tried several other games, but BattleTech has and always will be my true love.. even if I don’t get to play much. I guess you could say I am more of a miniature collector and painter than I am a player. My favorite scale is 10mm (N scale) , which is what 95% of my collection is, but 15mm is also a preferred scale. 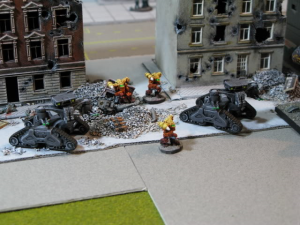 Salamander Battle Armor VS Hunter-Killer Tanks from Terminator. I LIKE the way this man thinks.

Ron: Does your job bring much to the table for experience or inspiration?

DT: Not really. In fact my job sucks away too much of my free time. You might say it actually has a negative effect. However, it does allow me to get my hands on some pretty fantastic minis and models, even if I can’t get enough time to finish them all in a timely fashion.

Ron: What do you find easiest to modify on a miniature or model? The hardest?

DT: The easiest thing to modify? Probably a simple weapon swap- say, on a BattleMech, where all I have to do is remove the original weapon and just glue a new one in its place.
The hardest would have to be complete make-overs. When I have to cut apart arms and legs to create a more dramatic pose and get every part set back in just the right spot, or install a weapon where there normally wasn’t one and make it look seamless- like it was supposed to be there the whole time. A lot of times these kind of modifications call for me to sculpt some new parts, knee joints, elbows, ankles, hard points, etc., etc. and that means a bit more time and effort, but if it means I will end up with a truly bad-ass, one-of-a-kind mini, then the extra work is definitely worth it!

Ron: You mentioned in prior correspondence that you have taken commissions before but mainly these are your babies. What have been some of your best minis and dioramas and why? 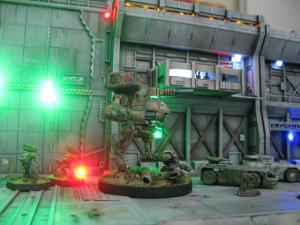 Looks like the Colonial Marines have themselves a Timberwolf. Or did a clan seize some M577 Armoured Personnel Carriers as isorla?

DT: It is very difficult to pick  my best, but I can offer a few of my favorites. This may be my biggest labor of love- my lighted ‘Mech bay. I wired up LEDs and combined four Kotobukiya mech bay kits to make one large display. It would be easier to just supply you a link to my blog here.

Ron: I recently interviewed Chris Gotcher, who mentioned he knows you in an email. Has he tried to interest you in collaborating or have you thought of making your own sculpts and molds?

DT: I just got some of Chris’s minis and am currently working on them. I have been asked about my sculpts- I already have made quite a few of my own-, but I am not quite up to a skill level that I am happy with to actually reproduce and distribute. I am going to explore some 3-D design work of my own, seeing as how this is the hot, new technique.

Join us next time as I finish up my interview with Spaceman. Between the BattleTech, Aliens, and Terminator, he sure causes some Science Friction.