Mitch: The community’s faith in us has been really cool.  Everybody online has just been like “You are the guys to make this!”  Really, it was touching.

Nic: After you guys did such a good job with Shadowrun, I think everyone was thinking “I really hope there’s some BattleTech coming next!”

Mike: There were a few Shadowrun backers that were photoshopping ‘Mechs into Shadowrun art, and that was awesome.

Nic: How long have you guys been scheming to get BattleTech onto the books?

Nic: Since the beginning?

Mitch: Yeah, since we formed HBS we’ve talked about BattleTech forever.  It’s just a matter of licensing, which is its own issue.

Mike: The team burst into a round of applause we announced we got the licenses.

Nic: So really quick question – is it just going to be called BATTLETECH?

Mitch: Yeah!  It’s just going to be called BATTLETECH.  We don’t want to equivocate or anything.  It’s not “BATTLETECH: THE DISFUNCTION OF JARED’S SIN”. It’s BATTLETECH.

Mike: And it actually is appropriate to what we’re doing, because we’re trying to bring BattleTech back to its roots, both fictionally and game play wise.  We’re set in the 3025 era, Third Succession War is over, and the Fourth is just starting percolate.  There’s peace, but it’s not really peace.  So we think it’s a really cool era, the history of the Inner Sphere, and we can really tell the kind of stories we want to tell.  We can explore the depth of feudal and political intrigue of the franchise.  We’re really excited.

Nic: BattleTech has been in many forms since its inception obviously.  From tabletop to PC to Virtual World to MechWarrior to MechCommander.  What style game is this?  How will the players be interacting?  With a MechWarrior or a ‘Mech?  Or both?

Mike: Both!  We’re making a turn-based, tactical squad combat game.  You’re going to command a lance of 4 ‘Mechs on the battlefield.  It’s going to be a single-player mercenary-style campaign.  MechWarrior 2 is a good reference for that. You’re going to choose which missions you want to take.  You’re going to hire new MechWarriors, upgrade your ‘Mechs, get salvage.  All that good stuff, from mission to mission.

Mitch: And develop your MechWarriors too.

Mike: Yes! MechWarriors will grow.  We’re careful not to guarantee specific features here, but we’re looking at MechWarriors with different quirks, personalities, strengths and weaknesses that might manifest over time.

Nic: Because from my recollection at least, in existing PC games, there wasn’t as much of a focus as developing the MechWarrior.

Mitch: In MechCommander 2, we did.  And that’s a great basis of knowledge of us to go forward.  It was actually very successful in MechCommander 2 and I think the audience reacted well to it. So we can do even more of that.

Mike: The initial game we’re taking to Kickstarter is a single-player, open-ended campaign.  We are hoping we’ll do well in Kickstarter, so we are talking about multi-player as a stretch-goal.  We’ll have more details about that as we get closer to Kickstarter, in the next couple of months.

Nic: You guys had a great reaction from the Shadowrun Returns Kickstarter, that’s helped brought us all to this point here today.  What do you guys like about Kickstarter?  Why are you doing it through Kickstarter?

Mitch: We love Kickstarter.  It’s about the relationship with your audience.  That’s everything.  That’s a guiding principle of the entire studio, building real relationships.  We’re not this faceless company; we’re like a garage band.  And Mike’s the drummer!

Mitch: Yeah, you’re no drummer!  That’s the deal.  It’s really about the relationship with the audience, and letting them peak behind the curtain and show them how games are made.  We don’t show them how the sausage is made, if you know what I mean, because that gets ugly.  They don’t like the details.  But we’ll show you this is how, and we like doing that, we like sharing with the audience.

Mike: There’s going to be a mix.  We’re not ready to talk about any specifics, and to be frank, we’re still working on the pre-production of a lot of that stuff.  I will say that the backdrop of whatever happens in our game will be the canon you’re familiar — for example the Davion Steiner wedding is being planned.

Mitch: I just wanted to add to that.  It’s important to us, that when we made the Shadowrun game for example, it’s Shadowrun.  It’s true to the canon.  It’s true to tone that people expect.  We do our own thing, and we tell our own stories, but it’s steeped in that setting.  It’s the same thing with BATTLETECH.  We want to tell a real, classic BattleTech story.  That’s what people want.  And that’s what we damn well will give them!

Mike: You’ll be commanding a small mercenary outfit in the game.  That’s one of the things we think is cool about the 3025 era.  You’ve got “peace time”, but it’s not really peace time.  As a mercenary, you a deniable asset for a variety of the great houses, so there will be all sorts of interesting, cool story lines.  We’re talking about developing the periphery in some ways too.

Nic: What are some of the things you’re most excited about trying to include into your vision of the game?

Mitch: I’ve always been attracted to the background.  For me, having made the MechCommander series and worked on MechAssault, it’s important to me that it really feels genuine.  That it feels really steeped in the lore and stuff like that.

Mike: And I don’t think the Inner Sphere’s fiction has really been the focus of a PC MechWarrior in a long time.  MechWarrior was all about the Clan invasion.  So having the opportunity to really tell those classic Inner Sphere Machiavellian stories is really exciting.   Especially coming off of our storytelling experience with Shadowrun.

Nic: What are some of your goals with the Kickstarter?  You did a lot of stretch goals with Shadowrun Returns.  I’m assuming you’ll be offering interesting things for people that want to back BATTLETECH?

Mike: Our first goal for Kickstarter is to co-fund the development project with backers, not unlike a traditional publisher would with us.  We’ll be putting some money in.  We’ll be asking backers to help fund the rest of the budget for the base game.  And then we’re looking at a variety of stretch goals.  We’re looking at PvP, multiplayer, on the planet of Solaris 7, a lot of other cool stuff.  We’ve talked about the possibility of more company-command level things (in stretch-goal land).  This is my first GenCon, and I’ve been talking to BattleTech fans all day, and the passion for the project is tremendous.

Nic: Without giving us any commitments, Shadowrun took about a year from funding to release.  Are you guys hoping for a 2016 or 2017 release?

Mike: 2017.  We’d like to think we learn a little bit from project to project.  Shadowrun Returns was a blast and we’re really proud of it.  We also want to make sure we have enough time.  We’ve done this with Shadowrun and Golem Arcana several times now.  We have a pretty good idea, on BATTLETECH we want to start with a new fully 3D engine so we’re going to make sure we do it right.  We’re looking at early 2017.

Mitch: It also depends on what funding level we get!  So the more game they want us to make, the longer it’s probably going to take.

Mike: I will say we funded Shadowrun Hong Kong in January, we said it’d be out in August, and it’s coming out August 20th.

Nic: I think that’s one of the reasons why the community is so excited, because you guys really deliver (where not everyone on Kickstarter does).

Mike: We try our best.

Nic: Is it going to be based on any of the Shadowrun engine at all, or are you starting from scratch?

Mike: No, for the most part it’s from scratch.  ‘Mech combat is such a different beast.  Shadowrun is hide behind cover, ‘Mechs is not so much.

Mitch: I think the experience is more destroy cover.  That’s one of the things I loved about MechCommander.  You could just blow stuff up.

Mike: That was definitely something on the art direction side of things I want to make sure we’re able to make ‘Mechs look really big, and have that kind of weight and power about them.  Expect lots of things to step on and explode.

Nic: By the way, I love all the promo art! 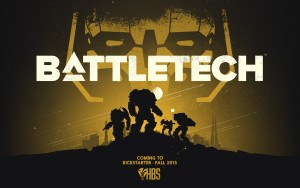 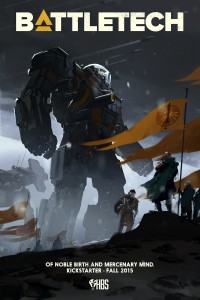 Mike: We’re using the base designs that MechWarrior Online uses.  We’re going to be putting our own spin on those, for our era and our style.

Nic: Any other teasers?

Mitch: We gave a lot of teasers!

Nic: Well, we’ll look forward to the Kickstarter this fall!