Hey everyone. I’ve mentioned Jon Paulson and his Mecha Front work for several months now. But I thought it would be better to hear directly from the horse’s mouth what’s been going on lately.

Ron: How did you get involved with developing your own line of figure mods?

Jon: I’ve been modifying and scratch building miniatures for 10-15 years, about 5 years ago I started experimenting with casting some of my sculpts which people immediately showed a very strong interest in. I started selling them on eBay and through my website, demand was high enough that I decided to focus on it full time. I initially started with a random assortment of weapons and conversion pieces but I knew from the get go that if I wanted it to grow as a business I would need to expand to doing a stand-alone line.

Ron: From what I’ve read on your paulsongames.com and before it the Mecha Front website, I can compare it to near-future games like Front Mission. Outside of BattleTech, where did you get your idea for the Mecha Front storyline?

Jon: There are a lot of different influences in the setting. I grew up watching RoboTech, early Gundam, Armored Trooper Votoms, Dougram; all of those shows had a gritty military theme to them that a lot of newer anime have moved away from. I’ve also been a huge fan of mech based video games; Armored Core and Front Mission were heavy influences. While I tend to feel that the gameplay was weak the settings and mech designs were always very cool. 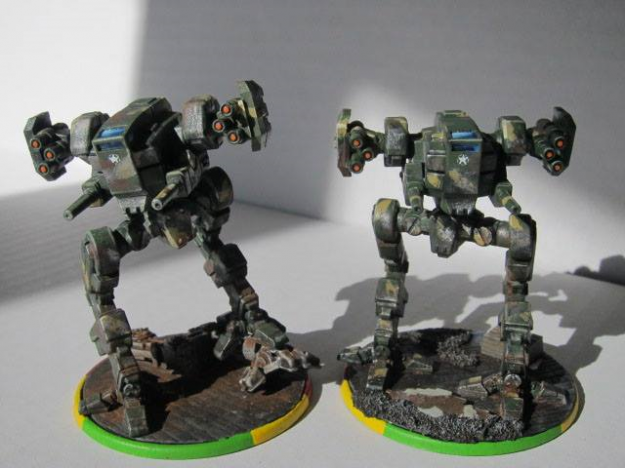 NorAM Raptor from Mecha Front: In all its Scroggliness.

Ron: I have to admit I’m a nut for Chromehounds and especially Front Mission, mainly due to its similarities to BattleTech.

Jon: While I’ve never played them I’ve thought the look of Chrome Hounds and Steel Battalion were also incredibly cool. For me the basic unifying theme for almost all of those settings is that they are Earth based in a near future that is ravaged by war. The mechs are the next generation of fighting machines and part of a dedicated military force. That has a lot of influence on the machinery itself, they are intended to look like military equipment so they have a ‘boxiness’ to them and often common parts to make field repairs easier.
The themes of conflict over resources, depleted oil, land, and even food all come from conflicts that have been occurring over the course of human history. Some of it I based on extreme projections of modern tensions and the major themes are based around cold war era strategies. I was always a huge fan of the original Red Dawn movie and I wondered to myself what would need to transpire in order for something of that magnitude to occur and what would it look like in a near future setting with mecha?

Ron: The long and short answer to that is, mainly logistics. But that’s an entirely different topic. As a newcomer to the industry, what has marketing of the game and the miniatures taught you?

Jon: I’ve been involved in a professional capacity with gaming for quite a while actually. I did play testing, game design, and demonstration events for WOTC and AEG for almost 10 years before I found my focus leaning more and more towards miniatures games. The key to a successful game be it cards or miniatures is to create an engaging setting. It doesn’t need to have an extensively developed backstory as that will evolve over time and grow with the game, however you need a strong hook to get the audience drawn in and interested.
Both CCGs and miniatures are strongly visual games, so that hinges on artwork that conveys the setting and gets inside of the players head. The game rules also play a role in conveying the feel of the setting. Anyone can write rules and think up characters but you need a strong synergy to make it come alive in the players mind. The miniatures are just static pieces of metal or plastic, the goal is to get players thinking beyond those miniatures.

Ron: Post-apocalyptic settings are very popular now. Between Jericho, The Walking Dead, all the video games. It shouldn’t be hard to find a passionate audience.

Jon: The secondary element is be passionate about what you do and work hard on your vision and not give up. I’ve had numerous setbacks, but those provide a learning experience and if used properly allow you to push even further. A little over a year before Palladium had partnered with Ninja Division I’d initially approached Palladium about doing a game and line of RoboTech models.

Ultimately it fell through but it opened up their eyes and got them interested in doing a miniatures line. Some people might see that as a failure but it gave me the push to work on refining my own system and miniatures line. Which I’ve grown to enjoy far more than any of the work I’d been putting into RoboTech. I’ve been able to design things from the ground up, without being reined in by constraints of working within pre-established setting or license. It allowed me to re-evaluate some of my game ideas and improve on them.

Ron: It would make certain things a lot easier than marching to another game’s tune.

Jon: An interesting parallel is that when Wizards of the Coast originally started up they were producing RPG materials until Palladium sued them over trademarked game terms. That failure caused them to re-evaluate their product and they came up with Magic the Gathering, in turn they ended up becoming the leading company in the gaming industry. I certainly don’t expect that level of success but it’s a very apt example why you need to keep pushing through failures and setbacks and continue to believe in your work. You may end up in a different place then what you initially expected but often it turns out to be a blessing as well.

Ron: How did you get involved with Anthony Scroggins? I can tell you he’d a pretty busy guy. I’ll also mention just how lovely the NorAm and Neo Bloc mechs are.

Jon: I was doing some searches for various mecha inspirations and I ran across some of Anthony’s work online, both illustrations he did for CGL and for independent projects. I was impressed with his work so I wrote him a few emails explaining the project idea which he was agreeable to and I grabbed a spot on his wait list for commissioned art. It took a couple months before he was open but once we rolling on pieces he was very accommodating.

Anthony has been really great to work with, and one of the things I think has been a huge asset is the ability to communicate and watch work in progress over streaming video. It helps hammer out some of the rough concepts a lot faster as we can generate real time feedback when toying with exploring profiles or details of the piece. He has a really solid ability to listen to the themes and ideas behind a mecha and hammer out a design from that. I gave him a mountain of reference material (and sometimes very contradicting directions) yet he was able to manage to sift through all that and come up with something tangible that we both liked.

Ron: I agree about Anthony. As remarkable as his artwork is his ability to network. He seems to get into everything. I think that besides saving money on production, having a limited number of mech chassis that have maximized loadout capabilities makes sense for a near future- post-collapse setting where resources are few.

Jon: I’m from a military family and grew around several airbases. Growing up around that stuff I’ve always had an innate understanding of what military equipment looks and feels like, there’s a distinct functionality in everything where they opt for practicality and durability over looks. As a result I’ve never been a fan of an ultra sleek looks to sci-fi equipment. The more hi tech something is the more likely its going fail and break down in the field.

Jon: A lot of the design I was aiming for was to have the models look and feel like they are part of that real world utilitarian design. Parts that can be interchanged, weapons that can be swapped out depending on the projected conflict theater etc. That’s part of what attracted me so heavily to the older look of stuff from Macross, early Gundam, and the Armored Core designs they fit that utilitarian model quite well.

Also when you have standardized designs for the chassis it streamlines production which helps keep costs down for the various nations involved. Military equipment is always very expensive due to the durability requirements and anything that that can be adapted to be multi-role and save on costs is usually preferred. (Although in some cases it leads to seriously bizarre design decisions).

Since much of the game is based on projections of modern day military organizations I wanted to reflect that in the game as well. It also has an added benefit of needing a bit less art in the developmental stage.

Ron: I guess whether its producing 54mm figures by a burgeoning game company or 60 ton battle tanks from the military industrial complex, cost-cutting is not only practical, but adds to the realism of a near-future setting.

We’ll finish up with Jon Paulson another time.

One thought on “Interview With Jon Paulson: Part One”